Turn on suggestions
Auto-suggest helps you quickly narrow down your search results by suggesting possible matches as you type.
Showing results for
Show  only  | Search instead for
Did you mean:
Logic Apps Standard Performance Benchmark - Burst workloads
By 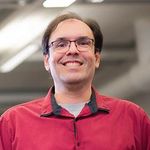 In collaboration with Henry Liu and Rohitha Hewawasam

We are starting a series of blog posts to benchmark common Logic App patterns.

For the first post is in the series, we will be looking at an asynchronous burst load. In this scenario an HTTP request with a batch of messages (up to 100k) invokes a process that fans out and processes the messages in parallel. It is based on a real-life scenario, implemented by one of our enterprise customers, who was kind enough to allow us to use it to benchmark various performance characteristics of Logic Apps Standard across WS1, WS2, and WS3 plans.

The diagram below represents the scenario at a conceptual level: 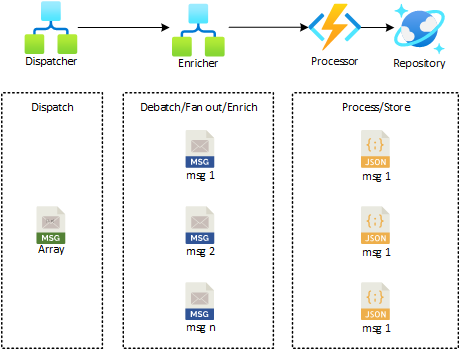 You can see the details of each logic app implementation in the diagrams below: 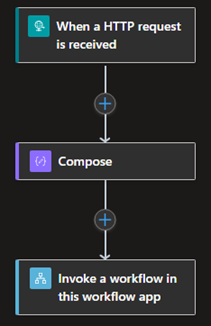 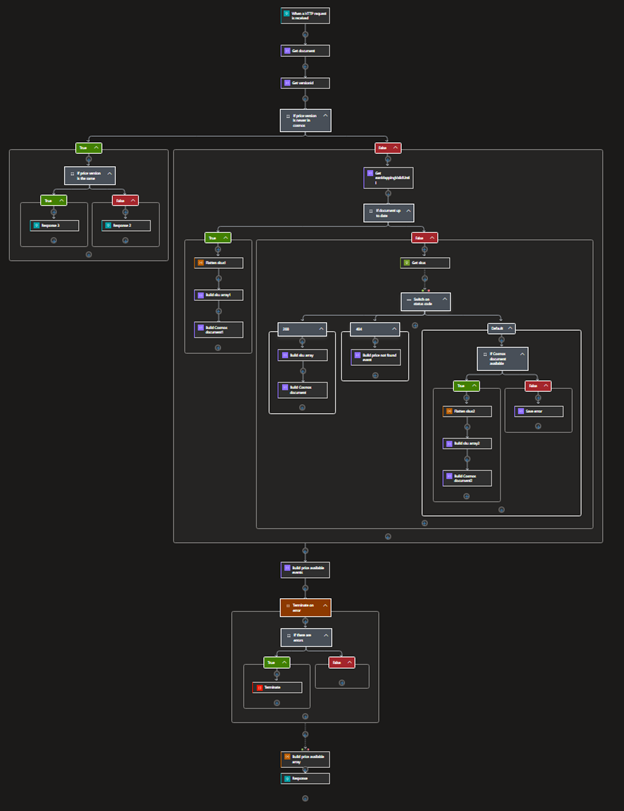 The diagrams below represent a series of metrics collated to understand the performance of each Logic Apps Standard app service Plan. You should be able to reproduce those results by following the instructions on github repository, collating your own benchmark measurements from Application Insights. Some notes:

The chart below represents the total time take to process a batch of 40k and 100k messages, respectively, when using a WS1, WS2 and WS3 app service plan: 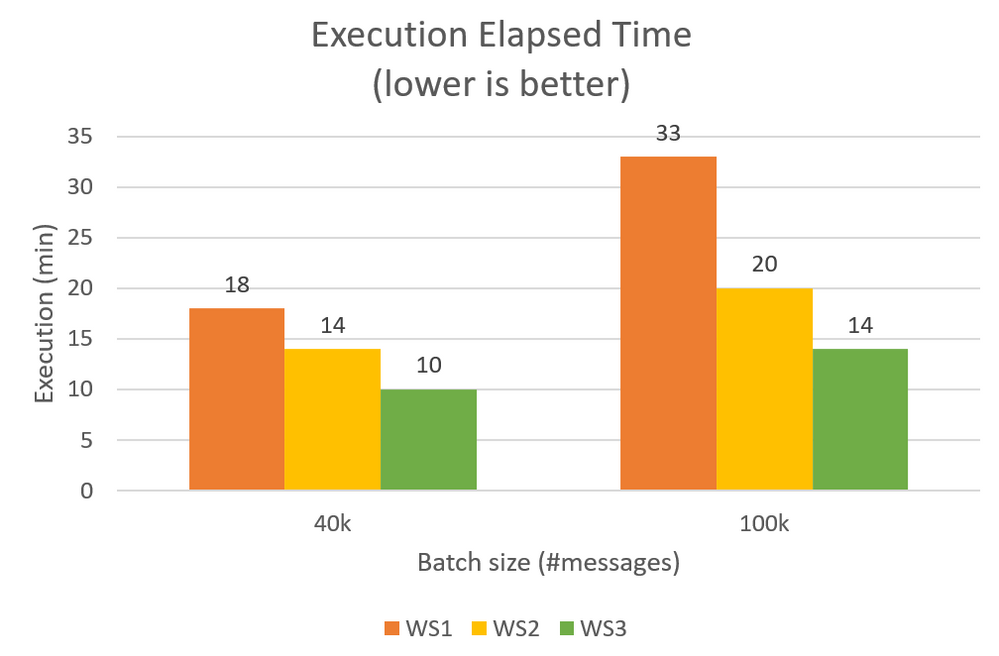 The scaling profile shows how each app service plan scaled overtime to meet the workload burst, using the default settings for elastic scale.

The diagram below shows some interesting points:

The table below shows the peak and average instance counts for each plan, to meet the 40k and 100k workloads, respectively:

When it comes to execution throughput, we can analyze it from two points of view:

We decided to focus on actions execution throughput, which might help you understand the throughput that would be applied to your own workflow, as it can be quite different in terms of complexity from the example presented. For completeness, we will include queries to calculate workflow executions later.

The table below represents the number of actions executed in total for each burst workload, and per workflow execution. This should allow you to analyze throughput and draw comparisons with your own scenarios and workloads. 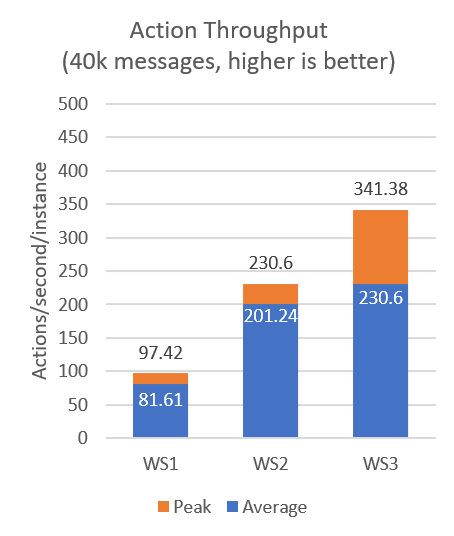 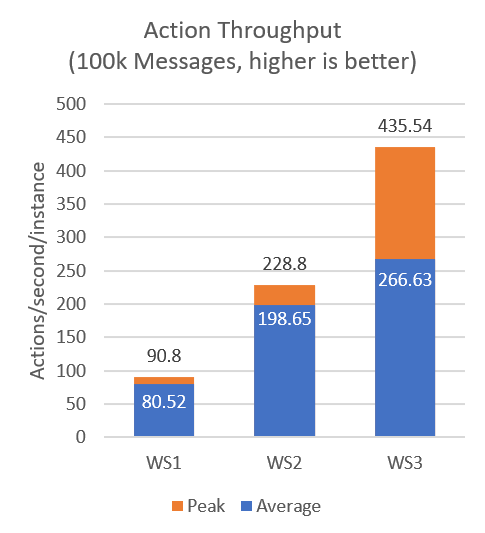 One more time, as app service plans grows, throughput increases proportionally, for both peak and averages.

Execution delay is the measure of when a job is scheduled to be executed versus when it was actually executed. It is important to note that this value will never be zero, but a higher execution delay indicates that system resources are busy and jobs have to wait longer before they can be executed. 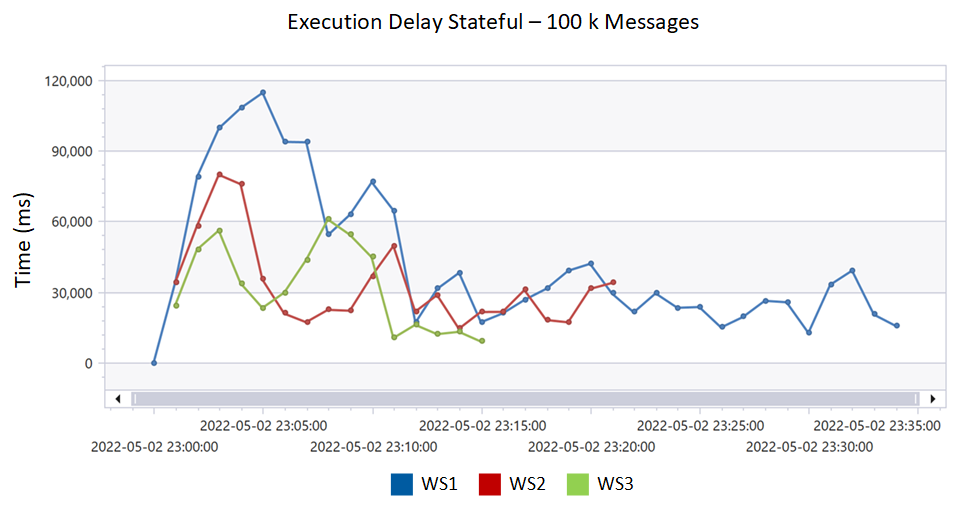 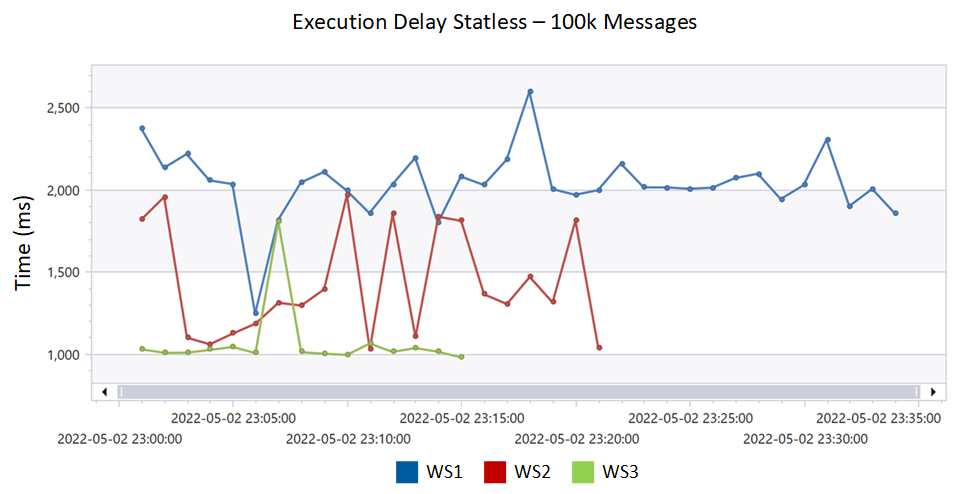 Execution delay is the time difference between when an action is scheduled to be executed and when it actually executed. An execution delay of 200ms or less is optimal. Higher execution delay means that current system resources are at capacity and scaling out is needed.

Another point to notice in the graphics above is how much the execution delay is improved when using Stateless workflows, compared to Stateful workflows.

The diagrams below present the CPU and memory utilization for each instance added to support the workload, in each on of the App Service Plans. The default scaling configuration will try to keep CPU utilization between 60% and 90%, as under 60% would indicate that the instance is under utilized, and 90% would indicate that the instance is under stress, leading to performance degradation. As usually CPU becomes a bottleneck much faster than memory, there is no default scaling for memory utilization. This can be confirmed by the data below.