Turn on suggestions
Auto-suggest helps you quickly narrow down your search results by suggesting possible matches as you type.
Showing results for
Show  only  | Search instead for
Did you mean:
Azure Logic Apps - Authenticate with managed identity for Azure AD OAuth-based connectors
By

When you enable and use a managed identity (formerly Managed Service Identity or MSI) for authentication, your logic apps can more easily access Azure resources that are protected by Azure Active Directory (Azure AD). A managed identity removes the need for you to manage credentials or Azure AD tokens by providing Azure services with an identity that is managed by Azure AD.

Below is the list of connectors supporting managed identity authentication in preview with more support coming for other connectors in the future:

How does a connection with a managed identity work at runtime? 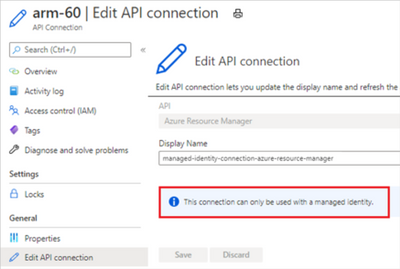