Turn on suggestions
Auto-suggest helps you quickly narrow down your search results by suggesting possible matches as you type.
Showing results for
Show  only  | Search instead for
Did you mean:
Troubleshooting TLS / SSL communication problems when making HTTP web request in ASP.NET Part 2
By 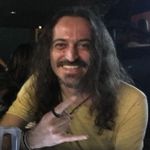 This is the second part of our series of articles about troubleshooting TLS / SSL communications problems when you make Http Web Request or WCF queries from your ASP.NET applications to SSL endpoints.

In our first scenario, we troubleshooted a "The underlying connection was closed: Could not establish trust relationship for the SSL/TLS secure channel" error message. We made some basic tests, such as a "browser test" and found that the certificate was not valid.

Now we have faced another problem but the browser test did not show any problem so the certificate seems valid in our browser test, and, we are still seeing the very same error message telling us that the existing connection is forcibly closed by the remote host. Remember that our ASP.NET web application is making an HTTP web request to https://iis85.buggybits.com/ URL so our ASP.NET web application is acting as a client here.

Although a browser can be used to test the communication, this may not be the safest way to test each and every scenario because this test will use current user's certificate store. When ASP.NET application is used it will use the computer account's store. This difference may cause different behaviors.

A few words about SSL handshake

SSL handshake is greatly explained here, so I will not dive into all of the details. I suggest you to read it if your unfamiliar with it.

Here is what happens after a TCP handshake as a summary:

Now it is a good time to capture a network trace from the machine where our client, ASP.net application, is hosted to check TCP and SSL handshake.

Note that it is always suggested to capture the network trace from both client and the server (even from the intermediate devices or servers, such as proxies, when possible), because capturing network traces from different nodes (e.g.: client and the server) could help analyzing the issue more detail. That is because you can check if the same traffic / package sent from the client arrives at the remote server without a problem. In our case it is OK to capture and take a look at the trace from client machine as we are currently trying to understand if TCP and SSL handshake is done sucessfully.

I personally choose Network Monitor but some of you may prefer Wireshark over Network Monitor. It is up to you to choose the tool to capture and analyze a network trace.

You can see a screenshot of the network trace I captured while I reproduce the same problem:

(Please note that the TMG is just the name of the server, and not the "Threat Management Gateway", sorry for the confusion)

Trace above shows that the TCP handshake is successfull (the first three frames). Then the client sends the "Client Hello" in the fourth frame (frame # 818) but instead of a "Server Hello" reply it receives a RESET package from the server as seen in the sixth frame (frame # 822) – you can see the R flag, which stands for TCP RST (reset) is indicated on the frame. So SSL handshake is failing here.

We know that the TLS and cipher suites are negotiated in the SSL handshake so those are the first things to check. If we look at the Client Hello details in the trace we see that the client sends TLS 1.0 request to the server:

This is interesting because the machine runs the ASP.NET application supports TLS 1.2 and we can confirm that from the SChannel registry at the following key:  HKEY_LOCAL_MACHINE\SYSTEM\CurrentControlSet\Control\SecurityProviders\SCHANNEL\Protocols (ref.: https://docs.microsoft.com/en-us/windows-server/identity/ad-fs/operations/manage-ssl-protocols-in-ad...:(

As seen in the screenshot above, TLS 1.2 is enabled as both client and server. If we check the other TLS protocols we confirm that TLS 1.0, 1.1 and 1.2 are all enabled.

Here is a theory comes at this point: our ASP.NET client tries communicating via TLS 1.0 but the remote server does not support it. How can we confirm our theory?

Remember our first troubleshooting step - browser test. It was working fine if we browse the same URL in a browser from our client (where our ASP.NET application runs). So we have a working scenario and let's take a look at the network trace taken for our browser test and see what the client requests and what the server responds (again, the TMG is just the name of the server, and not the "Threat Management Gateway", sorry for the confusion):

As seen above, there is Client Hello and server response with Server Hello and the certificate without its private key then the handshake suceeds. Let's take a closer look at the Client Hello (frame # 256) first:

This time, in sucessfull scenario with Ineternet Explorer, we are seeing that the client starts negotiation with TLS 1.2, actually it is the strongest version of the TLS supported on the machine. Now let's take a look at what server responds within the Server Hello:

Bingo! Server supports TLS 1.2. Then it is expected to fail if ASP.NET client tries to negotiate over TLS 1.0 which is not supported by the server. 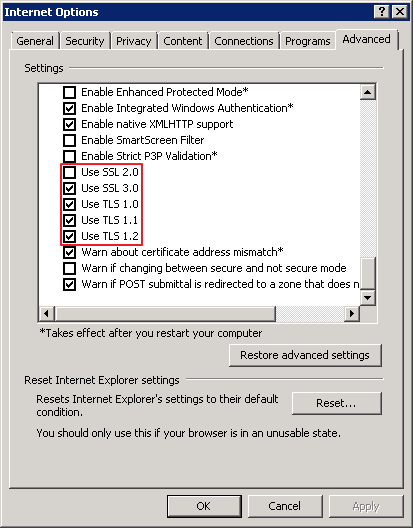 So Internet Explorer uses the strongest version of the protocol. Then why does not ASP.NET use the strongest one? Here comes a security update in the picture:

This update disables the RC4 and SSL 3.0 for .NET Framework and there are updates for different .NET Framework versions. As described in the article you can use the following registry key to force the usage of the strongest TLS version:

For 32-bit applications on x64-based systems:

Since we are using .NET 4.6.x, instead of setting the registry key we can just set targetFramework=4.6 in the web.config file to force using the strongest TLS version:

Note: Please make sure you read and understand the following article:

After setting the targetFramework in my application the TLS version negotiation started to work as expected, as confirmed in the network trace screenshot below:

(Once again, please note that the TMG is just the name of the server, and not the "Threat Management Gateway", sorry for the confusion)

Now if you check the Client Hello and Server Hello details you would see that TLS negotiation is suceeded as both are using TLS 1.2:

I would like to say that "we nailed it" but no, not at all. It is still not working. If you look at closely to the network trace, this time client is sending a FIN package and closing the TCP connection (frame # 185). Why is that? Let's analyze it in our last scenario.