Turn on suggestions
Auto-suggest helps you quickly narrow down your search results by suggesting possible matches as you type.
Showing results for
Show  only  | Search instead for
Did you mean:
Background threads in ASP.net applications (Part 2 – threading side effects)
By

In the second article of the series on the dangers of ASP.net background threading, to illustrate the dangers of such an architecture, I will start by introducing one more modification to the code of the sample application. This modification will be added to the code of the Global.asax that starts off the infinite loop thread that runs outside of the ASP.net thread pool. Here is the listing again, but notice the lines of code that have been added:

The first thing added is the creation of a private variable called loopIteration which we set to the value 1. Then inside the do {} while(true) infinite loop, I added a check to see if the result of the division of the value of the new variable by 5 is not zero – that is to say, each time the value of the variable is a multiple of 5 (5, 10, 15, etc), the if branch will be taken and an exception will be thrown by the code.

If you attempt to run the sample in IIS, you will see that after a time, the application pool will crash, and you will get an event 5011 logged by WAS (the Windows Process Activation Service) inside the System application log:

So what just happened?

When request execution happens inside IIS, ASP.net gives you a safety net. Almost all exceptions (except for a System.OutOfMemoryException, System.StackOverflowException and System.ExecutionEngineException) are caught by the runtime, if they are not caught by your application directly. Hence an exception like FileNotFoundException that would occur during a page execution (request 3 in the picture below) would wind up with a 500 error page being sent to the connecting user – who would see the ASP.net yellow screen of death, but the w3wp.exe process hosting the application would not crash. Hence all other threads inside the process could go on treating requests, and the only impacted person would be the user requesting that particular page.

For thread that we launched with the Application_Start() event handler, there is no associated context and the Thread itself is not part of the ASP.net thread pool. Hence, when an exception occurs, if it is not handled in the application code, it will be handed directly to the operating system to treat: the way Windows deals with such an exception is by crashing the w3wp.exe process – and all other threads and requests inside it. This is what happens when the throw statement is executed in the loop. If you are unlucky enough to send a request exactly when this happens, you will see a message indicating that “This page cannot be displayed” in your browser. 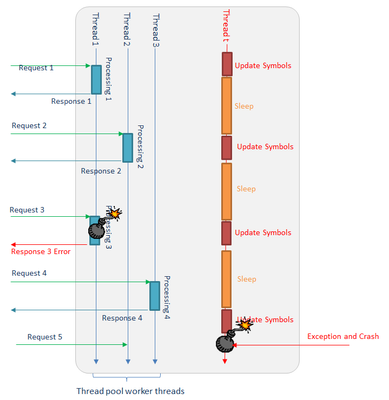 Also, when you attempt to recycle the application pool in IIS, you may see warnings from WAS in the event log indicating that the w3wp.exe process serving the pool took too long to shut down, and hence was killed. IIS has a mechanism by which, a w3wp.exe process serving an application pool is allowed 90 seconds to gracefully stop all threads and shut down when a recycle has to occur. Passed this time period (controlled by the shutdownTimeLimit - http://www.iis.net/configreference/system.applicationhost/applicationpools/add/processmodel - parameter in the configuration), WAS will issue a kill process and force shutdown the w3wp.exe process. In the case of the sample application, the looping thread will never relinquish control and will not allow the process to shut down even after 90 seconds, so WAS will have to proceed with a kill.

It is never a good idea to spawn up background threads in your application. If you need to have something treated on another thread outside the thread that does request treatment, consider calling the Threadpool.QueueWorkItem (http://msdn.microsoft.com/en-us/library/system.threading.threadpool.queueuserworkitem%28v=vs.110%29.... ) method call – this will use a free thread from the ASP.net threadpool to execute the code you give it. Another possibility is to consider asynchronous execution using the new .Net syntax with async and await.