First published on MSDN on May 27, 2015
Windows Server 2016 introduces Storage Spaces Direct (S2D), which enables building highly available storage systems which is virtual shared storage across the servers using local disks. This is a significant step forward in Microsoft's Windows Server Software-defined Storage (SDS) story as it simplifies the deployment and management of SDS systems and also unlocks use of new classes of disk devices, such as SATA disk devices, that were previously unavailable to clustered Storage Spaces with shared disks. The following document has more details about the technology, functionality, and how to deploy on physical hardware.

That experience and install guide notes that to be reliable and perform well in production, you need specific hardware (see the document for details).  However, we recognize that you may want to experiment and kick the tires a bit in a test environment, before you go and purchase hardware and using Virtual Machines is an easy way to do that. You can configure Storage Spaces Direct inside a VM on top of any cloud... be it Hyper-V, Azure, or your hypervisor of preference.


Assumptions for this Blog


S2D uses disks that are exclusively connected to one node of a Windows Server 2016 Failover Cluster and allows Storage Spaces to create pools using those disks. Virtual Disks (Spaces) that are configured on the pool will have their redundant data (mirrors or parity) spread across the disks in different nodes of the cluster.  Since copies of the data is distributed, this allows access to data even when a node fails or is shutdown for maintenance.  Documents which go into details on Storage Spaces Direct can be found here http://aka.ms/S2D

You can implement S2D implement in VMs, with each VM configured with two or more virtual disks connected to the VM’s SCSI Controller.  Each node of the cluster running inside of the VM will be able to connect to its own disks, but S2D will allow all the disks to be used in Storage Pools that span the cluster nodes.

S2D leverages SMB3 as the protocol transport to send redundant data, for the mirror or parity spaces to be distributed across the nodes.

Effectively, this emulates the configuration in the following diagram:

#Note: The values for the -StorageTierSizes parameter above are examples, you can specify the size you prefer. The -StorageTierFriendNames of Performance and Capacity are the names of the default tiers created with the Enable-ClusterS2D cmdlet. There are some cases there may only be one of them, or someone could have added more tier definitions to the system. Use Get-StorageTier to confirm what storage tiers exist on your system.


The simplest configuration is one machine hosting all of the VMs used for the S2D system.  In my case, a Windows Server 2016 system running on a desktop class machine with 16GB or RAM and a 4 core modern processor.

The VMs are configured identically. I have a virtual switch connected to the host’s network and goes out to the world for clients to connect and I created a second virtual switch that is set for Internal network, to provide another network path for S2D to utilize between the VMs. 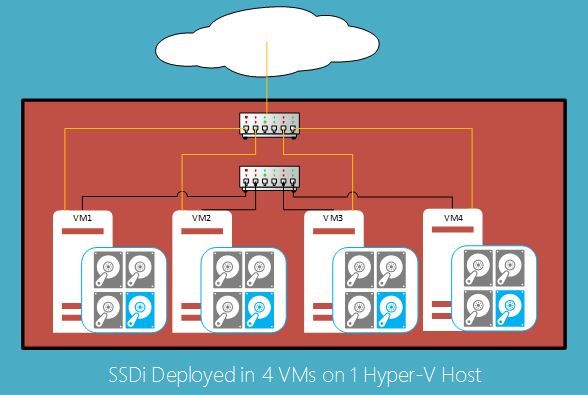 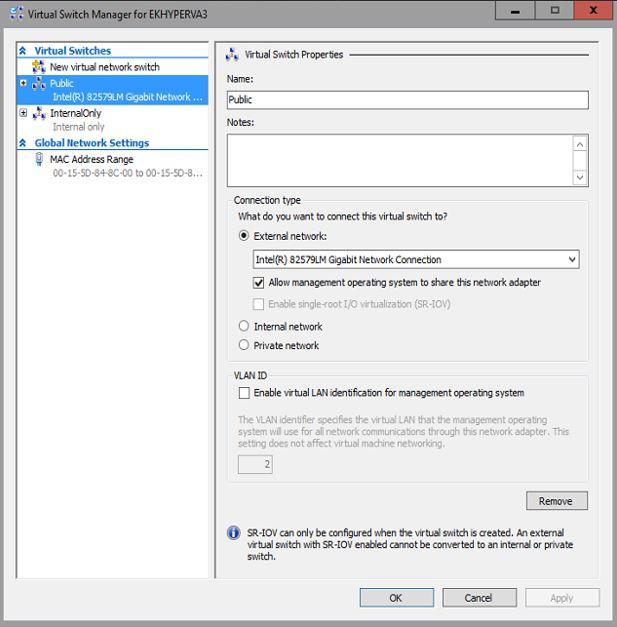 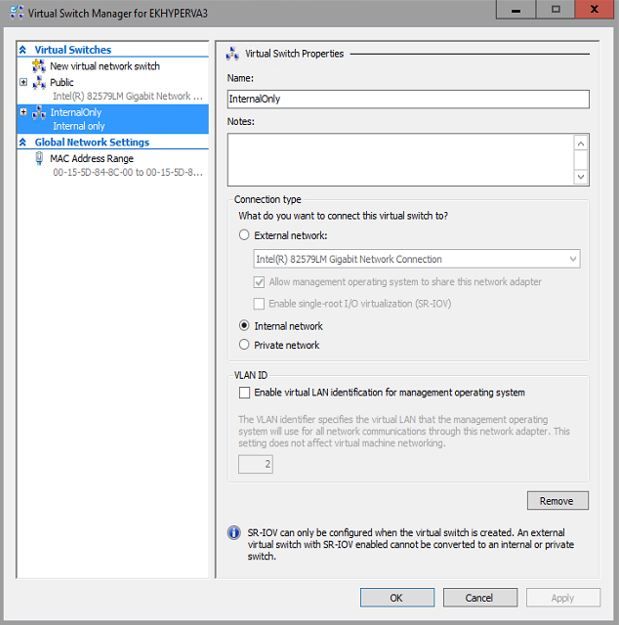 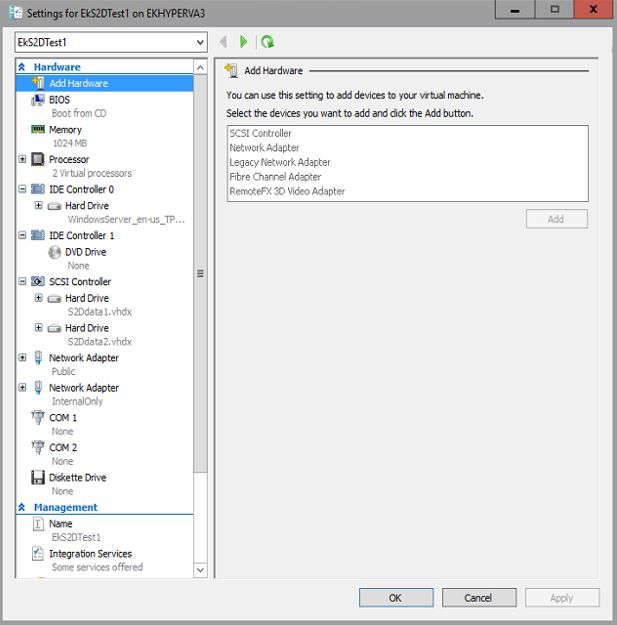 Note: Do not enable the virtual machine’s Processor Compatibility setting.  This setting disables certain processor capabilities that S2D requires inside the VM. This option is unchecked by default, and needs to stay that way.  You can see this setting here:


Once the VMs are configured, creating and managing the S2D system inside the VMs is almost identical to the steps for supported physical hardware:


You may not have a single machine with enough resources to host all VMs, or you may wish to spread the VMs across hosts to have greater resiliency to host failures.  Here is an diagram showing a configuration spread across two nodes, as an example:

Example: On this system I have an internal 10/100 Intel NIC and a dual port Pro/1000 1gb card. All Three NICs have virtual switches. I labeled one Public and connected it to the 10/100 NIC since my connection to the rest of the world is through a 100mb infrastructure.  I then have the 1gb NICs connected to a 1gb desktop switch (two different switches), and that provides my hosts two network paths between each other for S2D to use. As noted, three networks is not a requirement, but I have this available on my hosts so I use them all. 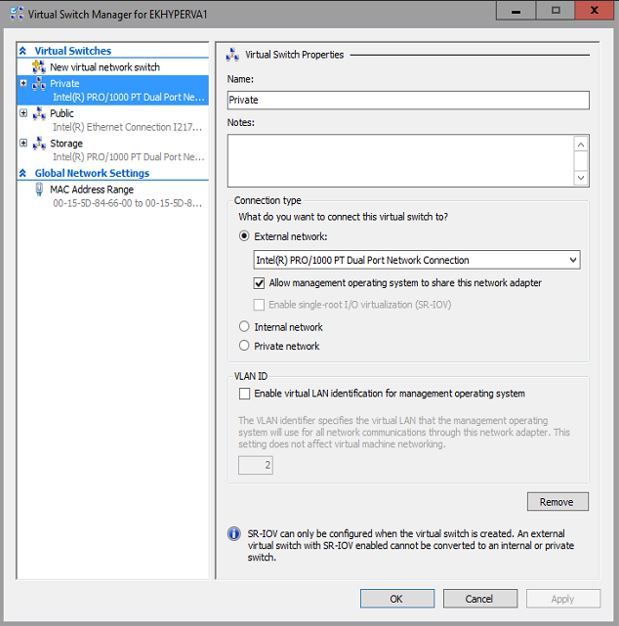 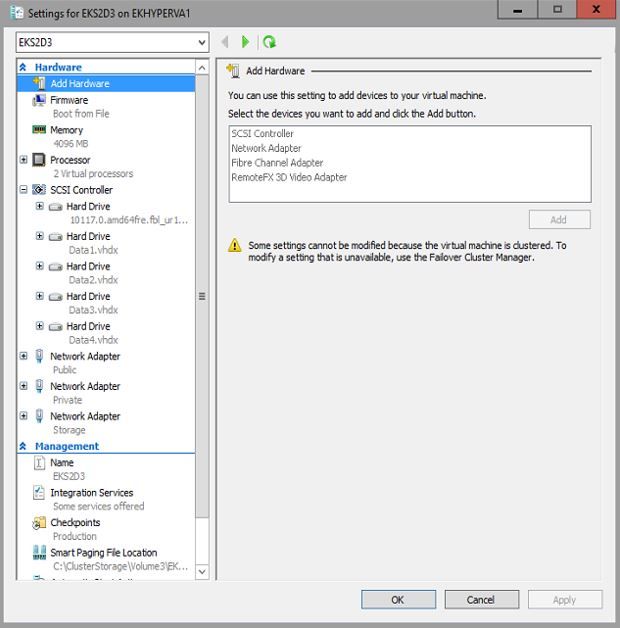 
How does this differ from what I can do in VMs with Shared VHDx?


Shared VHDx remains a valid and recommended solution to provide shared storage to a guest cluster (cluster running inside of VMs).  It allows a VHDx to be accessed by multiple VMs at the same time in order to provide clustered shared storage.  If any nodes (VMs) fail, the others have access to the VHDx and the clustered roles using the storage in the VMs can continue to access their data.

S2D allows clustered roles access to clustered storage spaces inside of the VMs without provisioning shared VHDx on the host.  S2D is also useful in scenarios where the private / public cloud does not support shared storage, such as Azure IaaS VMs.  See this blog for more information on configuring Guest Clusters on Azure IaaS VMs, including with S2D: https://blogs.msdn.microsoft.com/clustering/2017/02/14/deploying-an-iaas-vm-guest-clusters-in-mi...