Turn on suggestions
Auto-suggest helps you quickly narrow down your search results by suggesting possible matches as you type.
Showing results for
Show  only  | Search instead for
Did you mean:
Using EAC to manage multi-forest Exchange deployments
By

Following our last article, introducing the new Exchange Administration Center (EAC), we follow up on how the new EAC makes it really easy to manage multi-forest Exchange deployments.

First, let’s setup a resource forest environment as shown below, with a one-way forest trust setup so that Forest B trusts Forest A. 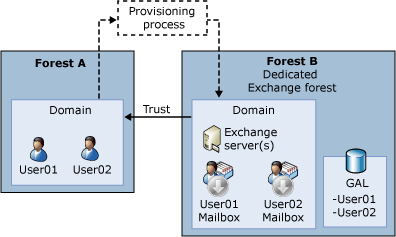 In a lab environment, we have a user, John Doe, setup in Forest A. We now want John Doe to be an Exchange administrator. To do this, we need to ensure that he has the appropriate Role-Based Access Control (RBAC) privileges in place in the Exchange resource forest. Since we are dealing with a multi-forest environment here, there are two ways of configuring RBAC, and we will try both:

You may already have users setup in an account forest. Configuring these users as linked mailboxes establishes their presence in the Exchange resource forest. By adding these linked mailboxes to existing RBAC role groups, the associated users thus effectively become Exchange administrators.

In the figure below, John Doe’s user account is setup in the accounts forest. Using EAC, an Exchange administrator can then create a linked mailbox for him, as shown below.

Figure 2: John Doe has been setup as a linked mailbox. 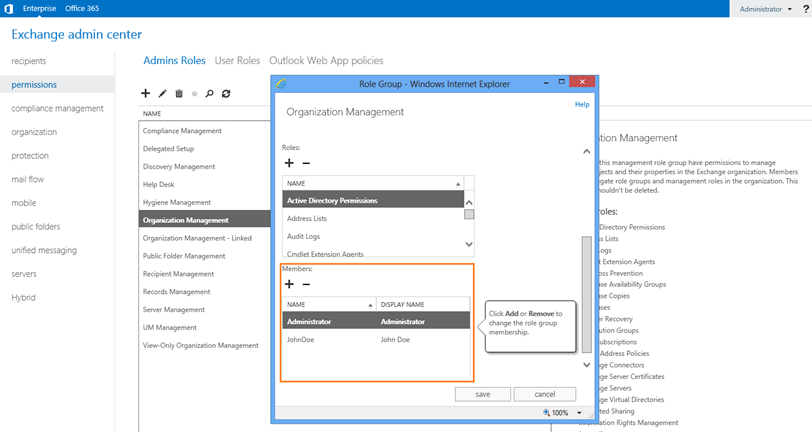 Figure 3: John Doe has been added as a member of the Organization Management role group.

Now, let’s try logging into EAC as John himself. John should now have Exchange administrative privileges, and that is what we see below.

Figure 4: Logging into EAC as John Doe, configured as a linked mailbox, and as a member of the Organization Management role group.

To demonstrate the above, we will do the following:

With the above steps, John Doe now has all RBAC privileges in the Exchange resource forest even though his user account is in the account forest.

We will now attempt to login to EAC as John Doe. We launch EAC from any desktop, and point it to a CAS server in the resource forest, and we are logged in. John has standard RBAC privileges as defined in the Organization Management RBAC role group and is able to manage Exchange in the resource forest accordingly.

As you can see, EAC makes it a snap to manage multi-forest Exchange deployments. You don’t need to remote into dedicated management machines to manage a specific Exchange forest, nor do you need to create special administrative accounts in every Exchange resource forest. You can do all this right from your own desktop with EAC, with your existing user credentials!

EAC is available in the latest Exchange 2013 Preview download bits as well as via the Office 365 Customer Preview offering. We will continue to write more about EAC in the upcoming weeks. In the meantime, do try the new EAC, and give us your feedback!