As a result, several users in these countries experience inconvenience with their Outlook meetings and appointments being off by one hour. Every year, we receive innumerous calls from customers reporting such behavior.

I will explain why the issue happens as well as how to minimize the impact for Outlook users.

Let's use Brazil as an example. The default time zone configuration for Brazil (GMT -03:00 Brasília) on any Microsoft operating system is:

For the year 2006/2007, the Brazilian government determined the following dates for the Daylight Saving Time:

Once the new dates are published by the government, administrators will need to update all Microsoft operating systems with the new DST dates. Generally they use the information on article KB: 317211, and the Time Zone Editor (tzedit.exe) utility to update the dates on the Time Zone in question.

As we can see there is a difference between the default DST Dates and the dates defined by the government. We are going to call this difference "Delta Period". 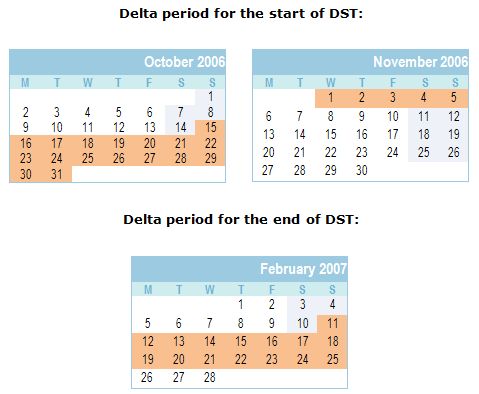 The question every customer asks is - why we experience this behavior? To answer this question, we need to understand how Outlook schedule meetings and appointments:

Three factors affect the scheduling of a meeting and appointment in Outlook:

What can I do to fix appointments on the delta period?

There is no centralized process that Exchange Administrators can use to update the users calendar.

Additional recommendations to minimize the occurrence of this inconvenience:

If you want more information, you can refer to the following Microsoft articles:

317211 How to configure daylight saving time dates for Brazil

0 Likes
Like
Share
5 Comments
Not applicable
Viviane, the main problem for me is why the "automatic adjust clock for daylight saving changes" option in conjunction with the automatic synchronization with an internet time server has never worked properly.

Ok, I can correct this manually. But why time.windows.com cannot be updated to set the correct time, ff sites like www.timeanddate.com can do that?

Thanks for your comment. We are not aware of any issue with the Windows Time Server. I recommend you to open an incident with Microsoft Support so this can be verified.

For other releases of Outlook (i.e: XP and 2003), Microsoft will release an Outlook Data Update tool, that will assist customer to adjust their calendars. This tool is tentatively scheduled for release in January 2007.

You can read more at:

As for CDO, this is what we have so far:

Thanks!!
0 Likes
Like
Not applicable
&quot;How is daylight saving time set in Israel?&quot; A good ref on how DST is followed in Israel is on the webexhibits
0 Likes
Like