In Exchange Server 2007, we completely rewrote Search - we upgraded from MS-Search 2.0 to 3.0 (which SQL Server 2005 also uses) and we changed from a "crawl" model to an "always up to date" model - we also rewrote the indexing part to be more efficient in how it communicates with the Exchange Information Store - the end result is an 35x improvement in indexing speed.

Because Search used so much resources, it was disabled by default in Exchange Server 2003, In Exchange Server 2007, it is enabled by default, and all our Microsoft Dogfood servers have it running - it hums along nicely, taking between 2 and 5% of CPU in steady state, rather than bringing the machine to its knees every night. Another added benefit of being on top of things is that the new messages are still fresh in the Jet cache, so reading them doesn't cause any additional I/Os.

You might notice that a third process actually uses most of the CPU - it is because MS-Search is actually composed of the core indexer (msftesql.exe) and a sacrificial filter daemon (msftefd.exe) which can be recycled at will. That's where the protocol handler, filters and word breakers live.

Full crawl is also much faster, but still uses a significant amount of CPU, memory and I/O. During more intensive processing phases, this could in principle disrupt regular mail flow. Since delivery of mail must take precedence over indexing, indexing backs off (throttles) when the load on mailbox server becomes too high. The indexing load is controlled by regulating the number of items (document chunks) that are processed per unit of time. A monitoring thread keeps track of the load on each MDB using the average latency it takes to retrieve documents from the MDB.  If this latency crosses a certain threshold (the default is 20 ms), it starts to restrict indexing by setting progressively higher processing delays per MDB (the delay value).  Before fetching a document from the MDB, the indexer checks the current throttling delay value, if it's larger than zero, it sleeps accordingly (throttling only occurs during full-crawls).

The delay value (DVt) for period t is calculated according to the following formula:

where LatencyThreshold is the latency that triggers  throttling, MaxDV is the maximum allowed delay value,  KP is the proportional gain factor and alfa is the feedback factor.

Here is a Performance Monitor screenshot of throttling in action (click on the picture if the width looks cut off for you): 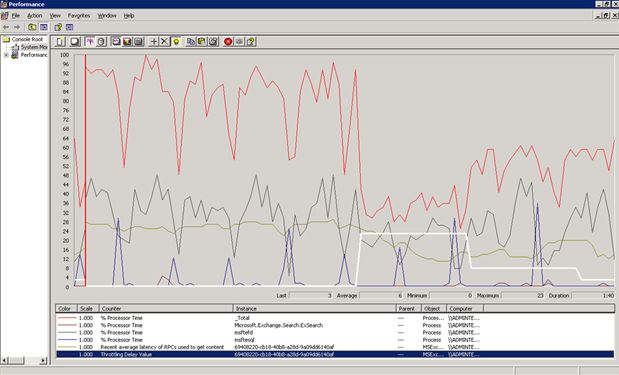