The Cloud On Your Terms (PART I): Deploying Hybrid

The Cloud On Your Terms (PART I): Deploying Hybrid

With Exchange Server 2013 and Exchange Online in Office 365 for Enterprises, customers continue to have the flexibility of moving to the cloud on their terms – whether switching fully to the cloud via a cut-over migration, migrating over time with a staged migration, or managing mailboxes both on-premises and online with a hybrid Exchange deployment. This unique hybrid option allows customers to move to the cloud at their own pace, while leveraging the sharing of calendar free/busy information, hosting mailbox archives in the cloud with Exchange Online Archiving, and enabling users in both organizations to connect and work seamlessly with each other.

A Brief History of Hybrid Deployment

Exchange Server 2013 includes improved support for Office 365, both in terms of making it easier to deploy and simpler to manage. The first of a two part post, this post will cover the changes we made to the hybrid deployment experience. A second post discussing the hybrid management improvements will follow shortly.

Now let’s a take a quick tour of the new hybrid deployment process and the new Exchange Administration Center (EAC) user interface. Although the user interface has significant changes, the requirements and sequence of tasks is very similar to Exchange 2010 SP2 from a process perspective.

For organizations planning a new hybrid deployment, we recommend that they deploy Exchange Server 2013 in order to leverage the improved deployment process and management experience.

Once these tasks are complete, run the Hybrid Configuration wizard to complete the configuration of your federation trust, organization relationships and mail flow connectors.

The Hybrid Configuration wizard can be found here within Exchange Administration Center: 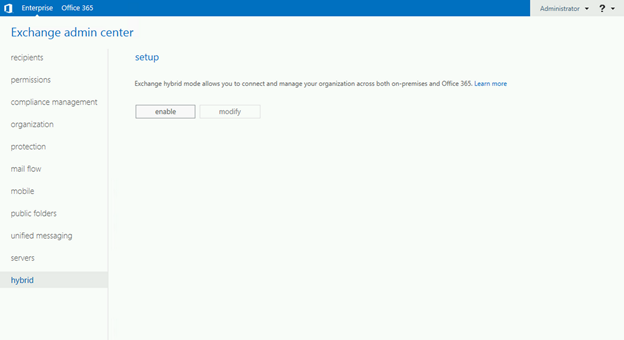 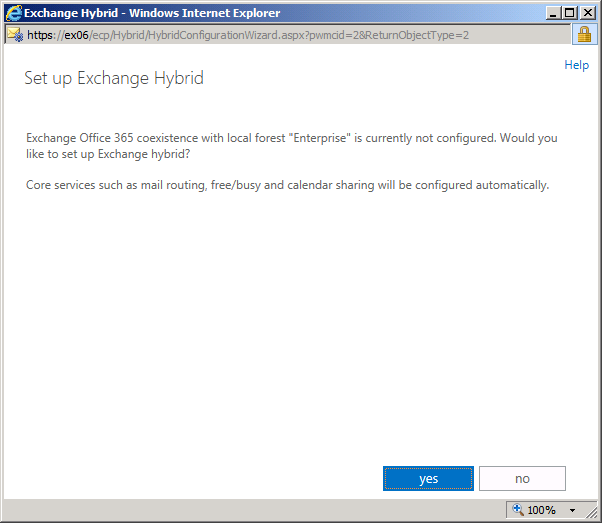 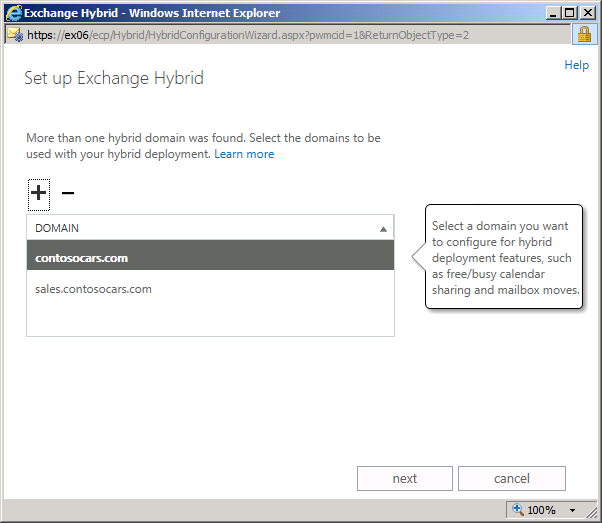 Next, you may be presented with domain proof token information for the domains you’ve selected to include in the hybrid deployment. You’ll need to create a TXT record on your public DNS to prove ownership of this domain. The Hybrid Configuration wizard will skip this step if the domain has already been federated. 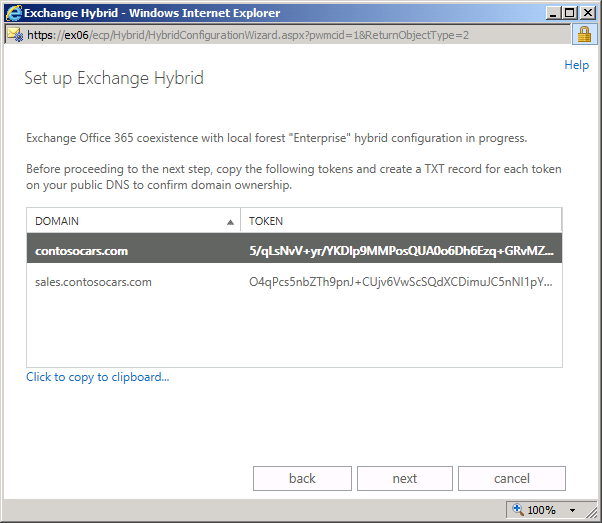 Next, you’ll select which server role you want to configure for bi-directional secure mail transport between the on-premises and Exchange Online organizations. You also have the option to enable centralized transport for outbound Exchange Online mail transport. Depending on how you answer, the wizard will either configure an Exchange Server 2013 Mailbox or Exchange 2010 Edge Transport server in your on-premises organization. For this post, we’ll select configuring a Client Access and Mailbox servers. 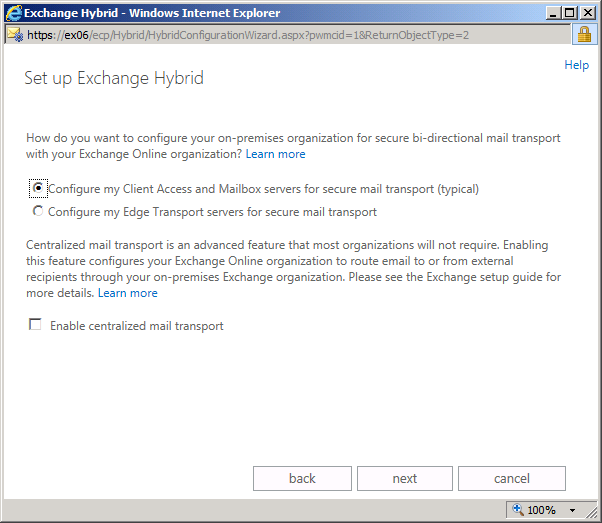 Next, you’ll select one or more on-premises Client Access servers you want to configure for bi-directional secure mail transport between the on-premises Exchange and Exchange Online organizations. 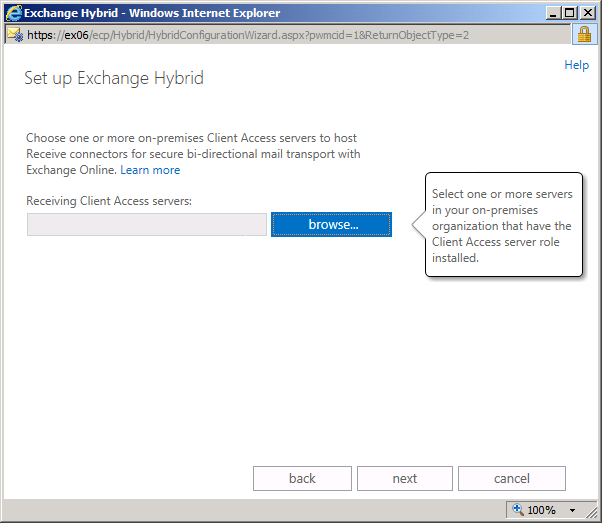 Next, you’ll select one or more on-premises Mailbox servers you want to configure for bi-directional secure mail transport between the on-premises Exchange and Exchange Online organizations. 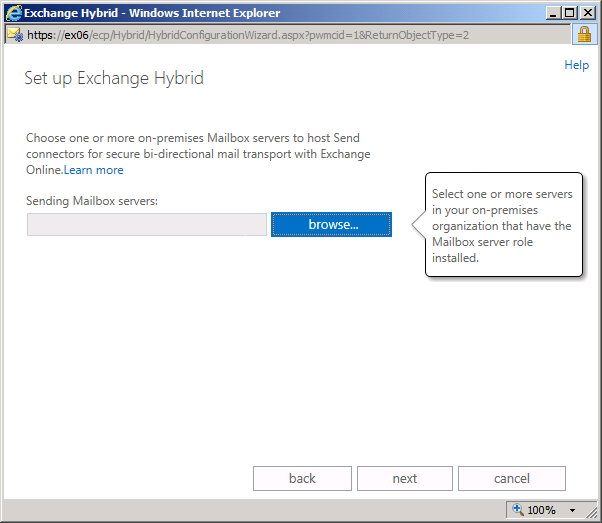 Next, you’ll select the digital certificate to use for secure mail transport. This certificate must be issued by a third-party Certificate Authority (CA) installed on the server(s) selected in the previous steps. 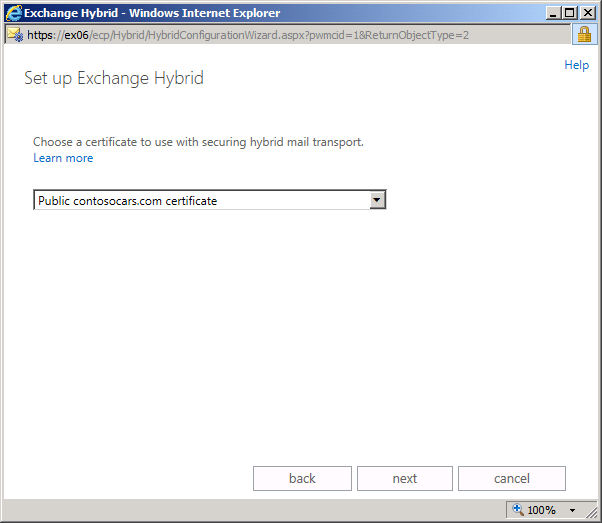 Next, you’ll enter the externally accessible FQDN for the on-premises Client Access server(s). The EOP service in Office 365 uses this FQDN to configure the service connectors for secure mail transport between your Exchange organizations. 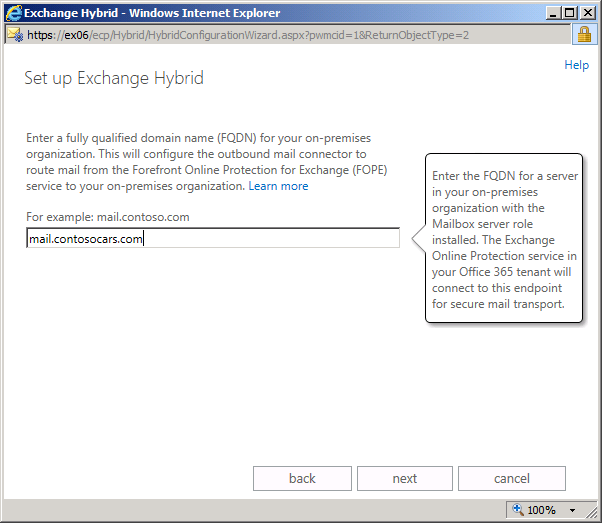 Finally, you’ll enter the credentials for accounts for both your on-premises and Office 365 tenant. Both of these accounts must be members of the Organization Management role groups. 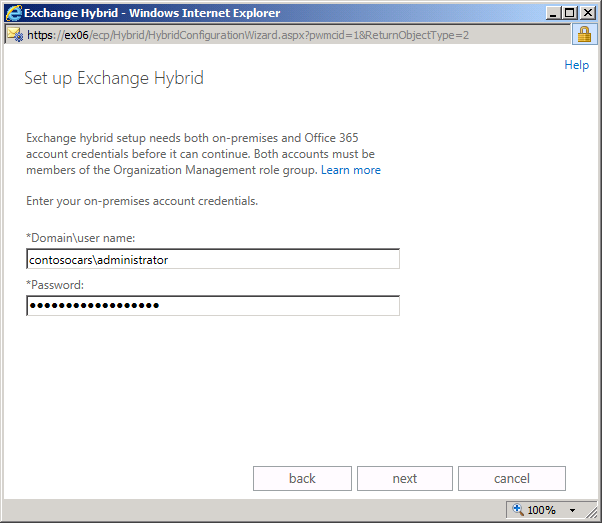 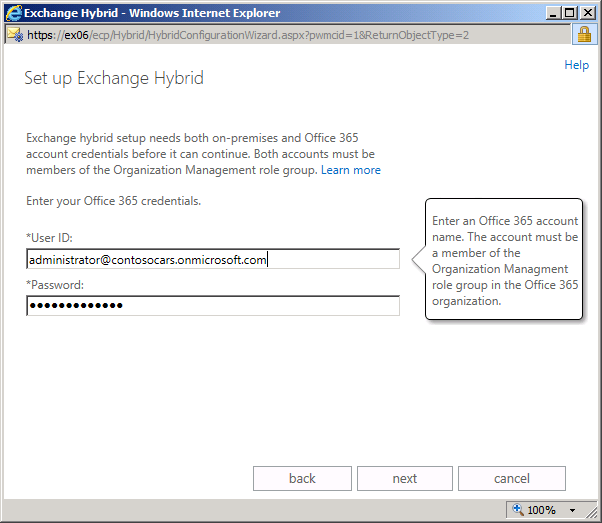 That’s it! The Hybrid Configuration wizard uses this information and automatically configures your on-premises and Exchange Online organizations for hybrid. 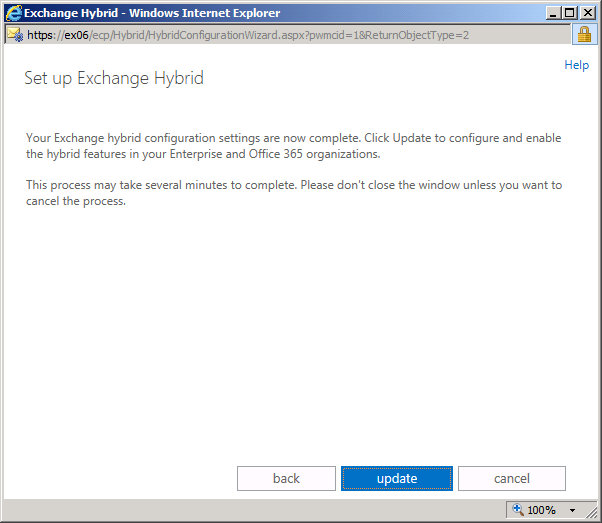 The Hybrid Configuration Engine now finds email address policies (EAP) that match the domains you select within the Hybrid Configuration wizard and updates them to include an email address based on a domain automatically generated by the Office 365 tenant service. This domain, known as the coexistence domain, is a domain created for each Office 365 tenant in the format of <your domain>.mail.onmicrosoft.com domain. For example, a coexistence domain for Contoso would be “contoso.mail.onmicrosoft.com” after the contoso.com domain was added to Office 365 as a federated domain.

What we’ve learned from Exchange 2010 SP2 customers was that some hybrid customers were manually editing email addresses to include the coexistence domain without going through Exchange tools and doing this without excluding the user from email address policies. This means that if the email address policy logic was triggered, which can happen inadvertently through a number of different means in Exchange, the user’s primary SMTP address may have been changed to match the policy template. These changes were unexpected for some of these customers and would often cause issues with hybrid mail transport. We’ve made a change in Exchange Server 2013 to support a new switch which allows the Hybrid Configuration Engine to add the extra email address for the coexistence domain for users without changing the primary SMTP address. This will occur even if your organization has manually edited user email addresses. We will be following up with another blog post to discuss this topic in more depth as we want to ensure customers know how to avoid this state when using manual methods to edit email addresses.

We hope that you’re as excited as we are about the new Hybrid Configuration wizard changes. Look for more articles soon covering topics such as troubleshooting, multi-forest support, and removing a hybrid configuration.