Turn on suggestions
Auto-suggest helps you quickly narrow down your search results by suggesting possible matches as you type.
Showing results for
Show  only  | Search instead for
Did you mean:
Squeaky Lobster rears its head again in the Microsoft employee giving campaign
By

This post is mainly for other softies who read the blog, but we hope our customers and partners enjoy it with us as the squeaky lobster has long been part of Exchange culture and lore and -- if we have anything to do with it -- will continue to embarrass the developer who started it all for years to come.

A little over 11 years ago, a developer on the JET team made an infamous checkin, to create a reg key controlling some obscure perf counters, named "Squeaky Lobster". The name was a reference to a girl he had a crush on at the time who donated a squeaky lobster to the annual Microsoft Giving Campaign charity auction. He thought it was a funny thing to donate to a giving campaign and gee whilikers, he had a checkin to make that day that surely nobody else would ever see, so why not?

And so, it began. Not with a bang, but a whimper.

But it doesn't end there, no no no. Fortunately, said developer has some friends and co-workers who won't let him forget about this incident of his youth, and celebrate Squeaky Lobster Day every September 26th by attempting to embarrass him. This year, the celebration is a little delayed, because the giving campaign doesn't start until October. and we decided that after 11 years (we turned it up to 11, awww yeah), it was time to donate another Squeaky Lobster to the giving campaign - except this time, it would be signed by Andrew himself!

Unfortunately this auction is only available inside Microsoft, but for those of you who do work here we encourage you to please bid on this (priceless, really) piece of Exchange history and continue the noble tradition of never letting Andrew forget: 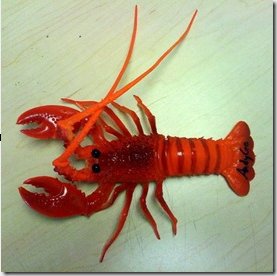