Properly calculating the SPECint 2006 rate value of your planned mailbox role processors is a critical step in the overall planning and design of your Exchange 2010 architecture. The SPECint 2006 rate value is used by the Mailbox Server Role Requirements Calculator to calculate the adjusted megacycles per processor core and the available per server megacycles of your planned mailbox role servers. This directly correlates to the required number of cores for mailbox, CAS, hub, and global catalog servers.

Today we are releasing version 1.1 of the Processor Query Tool. The PQT can assist you in determining your SPECint 2006 rate value by automating the manual process described in Mailbox Server Role Requirements calculator. The PQT allows you to quickly see the list of all servers that have been tested by the Standard Performance Evaluation Corporation (SPEC) with the same processor model you plan to deploy and the rate values produced by each of those tests.

If your particular server isn’t in the list it means the SPEC didn’t test your exact server model, however you can take advantage of the averaging feature of the PQT. The averaging feature will calculate the overall average SPECint rate value for all servers tested with your planned processor model and with the same number of cores per server that you plan to deploy in your environment. 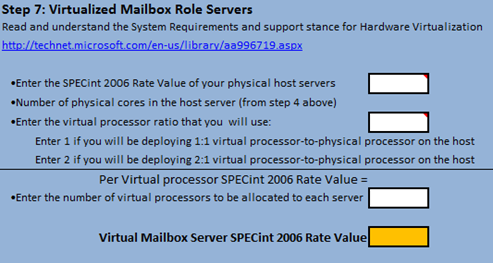