Turn on suggestions
Auto-suggest helps you quickly narrow down your search results by suggesting possible matches as you type.
Showing results for
Show  only  | Search instead for
Did you mean:
Recovering public folder information in Exchange 2013
By

For a second part of the series, please go here.

We are currently seeing that customers have started using and taking the advantage of the new public folders feature in Microsoft Exchange 2013. Since the public folders have been re-designed, it becomes very important to plan for recovery of deleted data as well.

This blog post we will be exploring various recovery scenarios that can occur with public folders in Microsoft Exchange 2013.

To understand this let’s take an example:

A user who deletes the content from a specific folder will see the following message: 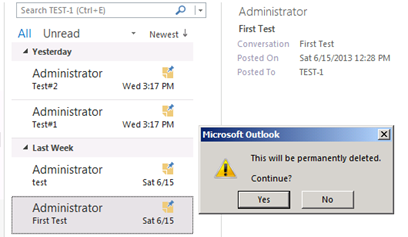 To then recover that data, user just needs to click on the Recover Deleted Items option in Outlook which will pop up a new window and will list the items to be recovered. From there, use the usual selection and Recover Selected Items functionality.

How to recover items which are past retention period?

If you need to recover the items from a public folder where deleted items have passed the retention period the only option is to restore from the last full good backup for the database which hosts the associated public folder content mailbox. This behavior is similar to the recovery of contents in normal mailboxes.

The missing data will be recovered to the affected public folder.

Outlook Clients make the job of recovering deleted public folders easy. The following things are necessary for the successful recovery of public folders:

In Exchange Admin Center (EAC) assign the permissions to the relevant user who wants to recover the public folder and click on save button and exit out.

Once the Root permissions have been assigned to the required user, the user can recover the public folder using the regular Outlook recover Deleted Items functionality. Once the folder is recovered, remove the permissions for the user that you added at the root level, if so desired.

While recovering public folders using Outlook is one of recovery options, we still have Exchange Management Shell which will help us in recovery scenarios and can make the job easier. Let’s say you need to restore a public folder to the root path or you are not the owner of the public folder which was deleted and you need to recover it.

You run the command:

Once the command is run it will create a text file. You need to open it and find the affected public folder path.

Let’s say I have a folder named “Test-3” which is deleted. I will search for the required folder in the text file:

Now open the Exchange Management Shell and run the following command, to recover the folder:

That is all! You can now open Outlook and access the public folder which you just recovered. The contents along with the permissions will be restored.

You can use the same process to also restore any deleted child public folder or entire branch of public folders which are deleted. Simply restore the Root folder and all of its content (including any child folders) will be restored with it.

Note: It’s not necessary to restore the Child public folder to its own Parent folder. It can also be restored to the root public folder hierarchy by specifying the desired path.

How to recover folders which are past deleted items retention period?

Similarly to recovering items past retention period, once you restore the database to a Recovery database you need to run a Shell command to restore the contents to the affected public folder.

There are certain pre-requisites for this recovery method:

Let’s walk through a scenario to understand this more clearly.

In order to recover the deleted June Reports folder from the restored database, we need to have a folder with a name of “June Reports” in the target public folder mailbox to which the data is being restored. This is a limitation of the restore process at this time. 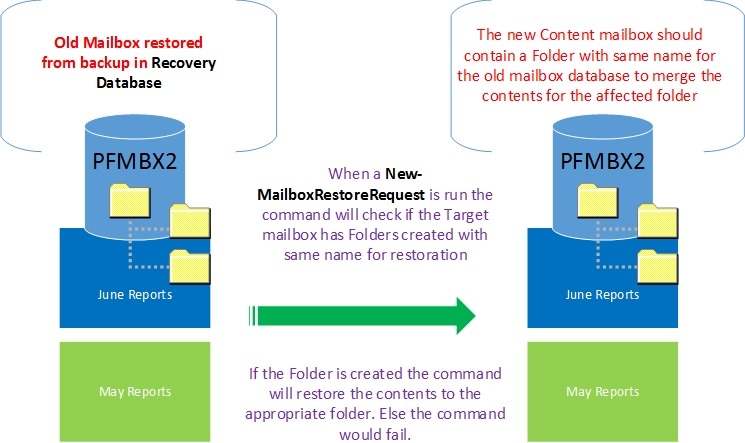 So, to walk through specific steps:

We need to recover a root public folder named June Reports. I have last full good backup with me which has the required data. Restore the database to a Recovery Database. Once the database has been restored you will have to perform the following steps:

Create a new public folder with name “June Reports” in a public folder content mailbox if it does not exists. If it exists, then you can skip this step.

Next you will run the command:

After that completes, you can run the below command to check if the command was successfully in restoring the contents:

To confirm the restore is completed, run the command Get-MailboxRestoreRequestStatistics and check the value of ItemsTransferred

Now, in Outlook the affected folder should have all restored items:

You should see the recovered items along with the new items in the folder.

I would like to Thank Ben Winzenz, Bill Long, Charlotte Raymundo, Nino Bilic and Bhalchandra Atre for their help in reviewing this blog post!