Turn on suggestions
Auto-suggest helps you quickly narrow down your search results by suggesting possible matches as you type.
Showing results for
Show  only  | Search instead for
Did you mean:
Public Folders and Exchange Online
By

Update 6/1/2021: The information in this blog post is now outdated. Please see the following for the updated information on this subject:

“You mean… this is really happening?”

How do we move our public folders to Exchange Online?

We are still putting the finishing touches on some of our migration documentation for on-premises Exchange Server environments to Exchange Online. We know there is a lot of interest in this documentation and we are making sure it is as easy to follow as possible. We will update this article with links to the content when more documentation becomes available on TechNet. The following two articles are available now.

Before we cover the migration process at a high level (and very deeply in those TechNet articles!), we want to be very clear everyone understands the following few important points.

So what are the steps I can expect to go through?

In the TechNet content we walk you through exactly how to use PowerShell and some scripts provided by the product group to help automate the analysis and content location mapping in Exchange 2013 or Exchange Online. The migration process is similar whether you are doing an on-premises to on-premises migration, or an on-premises to Exchange Online migration with the latter having a couple more twists. Both scenarios will include a few major steps you will go through to migrate your legacy public folder infrastructure. Again, the following section is meant to be an overview and not a complete rendering of what the more detailed step-by-step TechNet documentation contains. Consider this section an appetizer to get you thinking about your migration and what potential caveats may or may not affect you. The information below is tailored more to an Exchange Online migration, but our on-premises customers will also be facing many of the same steps and considerations.

Microsoft, what can I do/not do with these things in Exchange Online?

Now that we have given you an idea of what the migration process will be let us talk about the feature itself. Starting with the new Office 365, customers of Exchange Online will be able to store, free of charge, approximately 1.25 terabytes of public folder data in the cloud. Yes, you read the right… over a terabyte. The way this works is your tenant will be allowed to create up to fifty (50) public folder mailboxes, each yielding a 25 GB quota. However, when operating in a hybrid environment, public folders can exist only on-premises or in Exchange Online.

How is public folder management in Exchange Online performed?

Let’s go through each one of them, shall we?

In case the curious amongst you are wondering, we do not currently prevent customers from lowering the public folder mailbox quota values even though there is no reason you should do that. However, you are prevented from configuring quotas values larger than 25 GB.

If you have a particular business requirement which does not allow you to reduce the size of this single massive public folder in one of the ways previously suggested, then we will recommend you retain your entire public folder infrastructure on-premises instead of moving it to Exchange Online as we cannot increase the public folder mailbox quota beyond 25 GB. 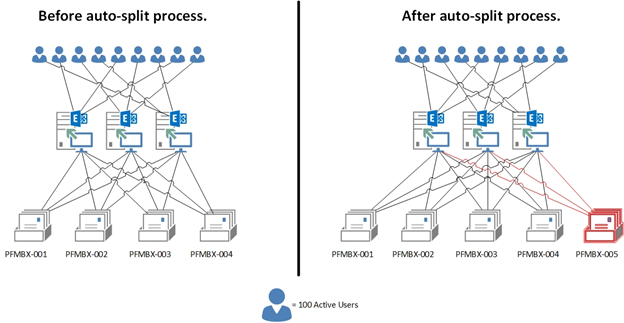 Once you begin utilizing the Exchange Online public folder infrastructure we are confident this built-in automation will help our customers focus on doing what they do best, which is running their business. Let us take care of the infrastructure for you so you have more time to spend on your other projects.

In summary we are extremely excited to deliver public folders in the new Exchange Online to you, our customers. We believe you will find the migration process from on-premises to Exchange Online fairly straightforward and our backend automation will alleviate you from having to manage many aspects of the feature. We really hope you enjoy using the public folders with Exchange Online as much as we enjoyed creating them for you.

Special thanks to the entire Public Folder Feature Crew, Nino Bilic, Tim Heeney, Ross Smith IV and Andrea Fowler for contributing to and validating this data.