In my previous article we saw that how easy it was to implement IIS ARR as a Reverse Proxy and Load Balancing solution for Exchange 2013. However that option is not the best if you are looking to achieve true high availability for your client connectivity. Read on and it’ll Arrrr! become clear.

In this post we’re going to cover another way of implementing IIS ARR (I’m calling this Option 2) for Exchange 2013. However just before that we need to understand the limitations of the previous posted solution (which we shall refer to as Option 1) so that you can see what we need to fix.

With the Option1 implementation, we are only performing health checks against OWA and AutoDiscover Virtual Directories (vdir’s). There were no explicit checks to make sure that Outlook Anywhere (OA), Exchange Web Services (EWS), Offline Address Book (OAB) and others were actually up and running. As these explicit checks didn’t happen, the Reverse Proxy could continue to forward other protocol requests to the CAS server, even when those services/protocols are down.

Let me explain this with an illustration. 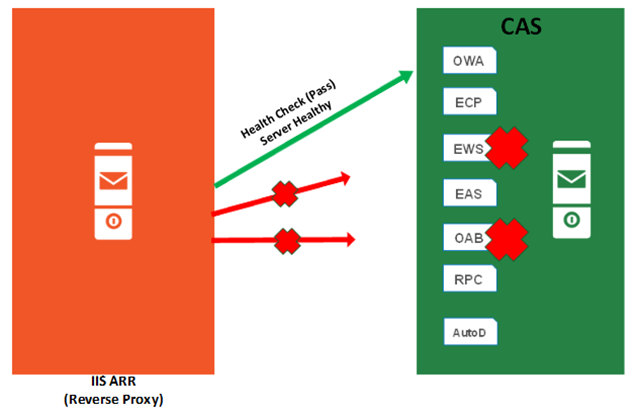 Let’s assume this time that the OWA virtual directory on CAS1 is down for some reason. Since the Health Check is only against the OWA vdir, the whole CAS1 server would be marked as unhealthy. Due to this all requests would now be directed to CAS2. So what we can see is, just because of the failure of one protocol all other requests are being directed to the second server, which is a loss of server resources. To overcome the above mentioned scenarios, you would create individual Server Farms and URL Rewrite rules for each individual protocol. This way, there would be individual Health Checks being performed against each protocol, thus providing you with a true Reverse Proxy and Load Balancing configuration.

Below is how IIS ARR would be able to achieve per-protocol health check:

Attaining this configuration (what we call Option 2) is what we will cover next.

STEP1: In this option we are going to implement individual Server Farms and URL Rewrite rules. However before you go ahead implementing this solution you need to make sure that you have published all the individual protocols with their own unique namespaces. (And you would of course require a certificate with all of these individual names on it) You would thus end up with something similar to the below.

STEP2: Then follow the same steps as earlier (from Option1), but create additional Server Farms and URL Rewrite rules as shown below i.e.: you would create a server farm and the corresponding Rewrite rule for each protocol.

The Health Test URL is in the format of https://FQDN/ProtocolName/HealthCheck.htm

That is all you have to do!!!...Now you have set up IIS ARR to validate the state of each protocol on the CAS server and only if a protocol is Healthy on a CAS server would IIS ARR forward the corresponding request and load balance accordingly.

Slight Variation on a Theme

Of course, rather than put all these names on the certificate, you could also just use a wild card certificate.

If you do choose to use a wildcard certificate, you should also make sure that you change the EXPR Outlook Provider, so that Outlook Anywhere clients can successfully connect to the Exchange Server (this behavior can be a particular issue if you have Windows XP clients). If you do not make this change then end users may continue to receive a prompt for a certificate mismatch.

Examples of how to change the relevant Outlook Providers are provided below:

Note: This change is not required if your end-users are running Windows Vista SP1 or later and only the internal, or the external may need to be set depending on how your certificates are deployed.

Testing if this all really works?

To simulate the failure of the OWA protocol on a server, we have stopped only the MSExchangeOWAAppPool on CAS1. Since we now have individual Health Test for each protocol, the server is marked Unhealthy only for the OWA protocol (ie: mail.tailspintoys.com). However the EWS and OAB protocols on the same server (TS-E2013-CA-01) continue to be marked as Healthy.

Comparison of the two options

Looking at the two options, we can highlight the advantages and disadvantages of implementing each individual solution. This table will help each of you evaluate which option would be the best suited for your Exchange 2013 environment.

Considerations for coexistence with Exchange 2007 and/or Exchange 2010

(These scenarios take into assumption that you have set up coexistence such that the Exchange 2013 CAS servers are internet facing and are publishing the client protocols (Outlook anywhere, OWA, ECP etc))

In this scenario all client protocol requests are proxied to the Exchange 2010 CAS servers by the Exchange 2013 CAS servers, hence no change is required on the IIS ARR server. The steps mentioned previously in the article are sufficient. Co-existing Exchange 2010 and 2013 is pretty easy no matter how you publish Exchange to the Internet.

In this scenario you need to remember that all protocol requests to Exchange 2007 are proxied by Exchange 2013 except for OWA and EWS. OWA requests would be redirected to Exchange 2007, and EWS requests must reach a 2007 EWS endpoint (AutoDiscover takes care of providing the correct version of URL to Outlook clients). This is achieved by using the legacy namespace (legacy.tailspintoys.com), which is just the same as when you migrated from Exchange 2003/2007 to Exchange 2010, if you ever did that.

For OWA and EWS to work correctly we need to do a few things in IIS ARR.

In summary, we have seen that IIS ARR is a very flexible Reverse Proxy Solution for Exchange 2013 and allows you to choose the appropriate implementation option to suit your business needs. Also it can be controlled more granularly by choosing what you want to publish externally. So for example, if your organization does not provide OWA to users on the internet then you don’t have to perform the configuration steps for OWA. Hopefully these articles have given you an idea of you can successfully implement IIS ARR for your Exchange 2013 environment.

I would like to whole heartedly thank Greg Taylor (Principal PM Lead) for his help in reviewing these article.