Turn on suggestions
Auto-suggest helps you quickly narrow down your search results by suggesting possible matches as you type.
Showing results for
Show  only  | Search instead for
Did you mean:
Outlook Anywhere runs best on Windows 2008 R2
By

We recently compared the performance of the Exchange 2010 Client Access role supporting Outlook Anywhere users on both Windows 2008 SP2 and Windows 2008 R2, and found that the improvements the Windows Team has made in R2 more than doubles the number of concurrent users a given server can support, assuming CPU is the limiting resource.

Our Client Access Server was an 8-core Xeon server (2L5335 Xeon 4-core processors @2 GHz, a 2007 chip design) running on Windows 2008 R2 with 16 GB of RAM. It was supported by: two servers running the Mailbox role, with 16 databases per server; a Hub Transport server; and an Active Directory server.

Users were simulated from 10 client machines, running Exchange Load Generator 2010, using the Outlook 2007 Cached module and the OutlookAnywhere_100 profile (formerly known as the 'Heavy Profile' - 20 sends and 80 receives per day).

We found the CPU consumed per user (MHz/user) increased linearly on both Windows 2008 SP2 and Windows 2008 R2. However, as shown on the graph below, the slope is 10 times smaller on Windows 2008 R2. The cost of the Exchange processes, dominated by the Microsoft.Exchange.RPCClientAccess.Service process, was independent of operating system. 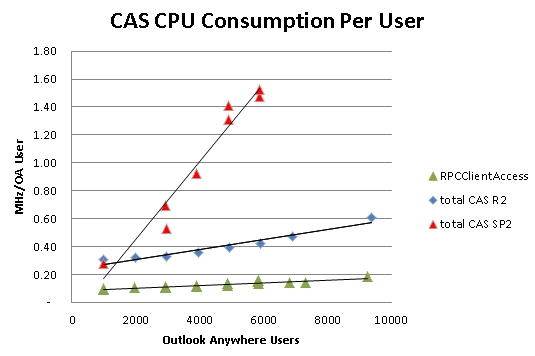 The Windows RPC/HTTP team has made many performance fixes in R2, so the dramatic improvement compared to Windows 2008 SP2 is expected. Since the improvements are in the operating system, we expect the same improvement with Exchange 2007 SP3.

Since we have an increasing cost/user, to make predictions about the total CAS CPU consumed we fit the data with a parabola. We consider the server 'full' when it runs at 75% total CPU, or in this case when 12 GHz is consumed. From these fits we estimate that on Windows 2008 R2 this server could support about 14,000 Outlook Anywhere Users, compared to about 6,500 on Windows 2008 SP2. Note that this assumes that CPU is the limiting resource on the Client Access Server, and as there is uncertainty in any projection we strongly advise you to run your own tests before putting servers into production. 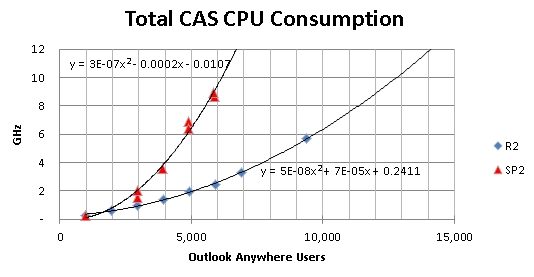 This operating system comparison was done using Basic Auth. A comparison between Basic and NTLM authentication on Windows 2008 R2 results in a very small 2% reduction in Outlook Anywhere users supported. 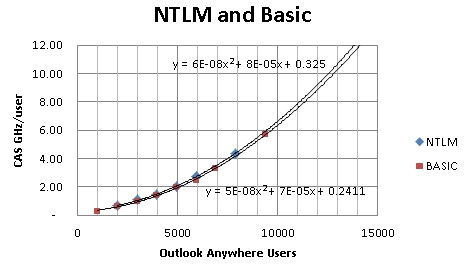 The cost per user of the other roles, all running Window2008 SP2, was basically flat above 3,000 users (only data from the CAS R2 Basic Auth runs are included here) so sizing those roles is straightforward. 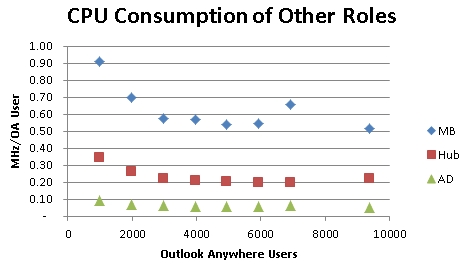 These results will be included in an upcoming TechNet whitepaper on Exchange 2010 CAS Guidance.