The purpose of this article is to provide high level overview of hierarchy synchronization process in public folders and provide some troubleshooting steps to monitor and troubleshoot hierarchy related issues. The information presented here applies to public folder deployment in Exchange on-premises as well as Exchange Online, with any differences called out. Before we get started, these are some of the terms used in public folder world:

Let’s discuss how the public folder synchronization works and the components involved.

In pull mode, hierarchy replication is driven by secondary hierarchy mailboxes. At regular interval, the secondary hierarchy mailbox connects to the primary hierarchy mailbox to pull the changes in hierarchy. This process is accomplished with the help of the ServiceHost process (running on each server) and the MRS proxy service (running on the server hosting the primary mailbox). The frequency of connection depends on whether clients were connected to the mailbox or not. This workflow is executed with the following frequencies: Additionally, the following situations also trigger sync operations between a secondary mailbox and primary: The process described above was the default model for full as well as incremental hierarchy synchronization in the early days of modern public folders and served well as long as the number of public folder mailboxes was not high. However, there were some limitations with this model: To address these problems, a new “push mode” of hierarchy sync was introduced.

The push mode of hierarchy sync is driven by primary PF mailbox, mainly for the incremental synchronization of hierarchy. This change was introduced in Exchange Server 2016 CU2 on-premises and in Exchange Online around the same time. In push mode, the primary PF mailbox proactively: Pull mode is still used for: In push mode, the primary PF mailbox drives the incremental hierarchy sync jobs, using transport to send email messages to a hidden distribution list containing the different public folder mailboxes present in the hierarchy. Some key properties of this distribution list: The hidden DL created for sending push notification messages cannot be seen in Exchange Online but you can use the following command to view the hidden DL in Exchange on-premises:

An admin can exclude specific PF mailbox from being automatically assigned by configuring IsExcludedFromServingHierarchy to $True Example:

An admin can override the system assignment by using this command:

The public folder mailbox serving hierarchy for the user can be found using this command:

For larger deployments, avoid manually assigning DefaultPublicFolderMailbox on users, as it may overload the assigned PF mailbox with lots of concurrent connections. As we learned earlier, the system assigns DefaultPublicFolderMailbox on users in such a way that connections are load balanced between public folder mailboxes available for serving hierarchy. Follow the best practices guidelines here for public folder mailbox placement and assignment.

Making sure hierarchy is healthy

Here are some tips and tricks to help keep your public folder hierarchy in top shape.

If you suspect a specific PF mailbox is not receiving hierarchy (perhaps users tell you they can’t see a folder they know to exist), you can use the following command to get diagnostic information about hierarchy:

Here are some other ways to view data; To compare the hierarchy between PF mailboxes

Then, you can check the output of “HierarchyInfo” from both the mailboxes and compare: 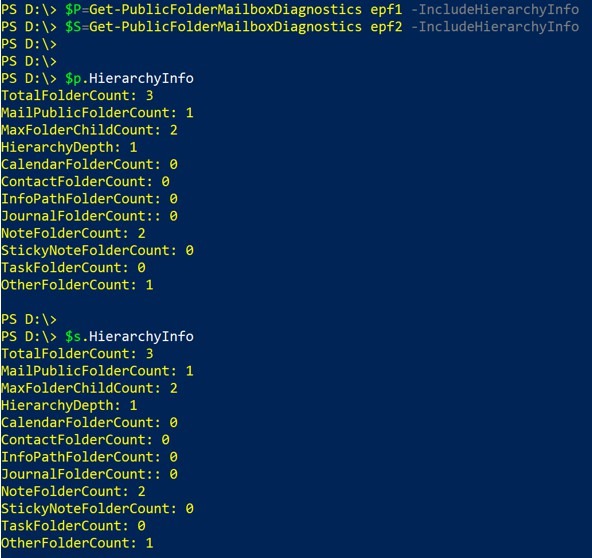 If you find the hierarchy information is not the same, you can use following command to view the time of the last sync:

The following command will give you a detailed failure message from the last sync failure, a blank output indicates sync has never failed:

You can explore the other values of AssistantInfo, SyncInfo & HierarchyInfo blocks. In case the need arises to contact Microsoft Support for assistance, you should export the report to XML format and send it along.

The following are some things to know related to the hierarchy sync of public folders:

Since push notifications are an email message delivered using transport they will be included in journaling if enabled in an organization. In such a scenario, you can use scoped journaling and exclude the SMTP address of primary public folder mailbox from the journaling rule (as that is a sender of push notification messages).

You may observe that the public folder mailbox shows in the “Top Sender and recipient report” in the Security & Compliance Center.

This is currently normal and not a sign of a problem, because the primary public folder mailbox sends a large number of push notification emails to secondary mailboxes via transport. The next version of the report will exclude the public folder hierarchy sync emails.

We hope this gives you better understanding of modern public folder hierarchy and some tools you can use to perform the troubleshooting. We would love to hear any feedback you may have on the topic. The Public Folder Team
0 Likes
Like
Share
3 Comments
Not applicable
And a couple of deeper questions on this topic:

1. When a new folder is created, is this an atomic process whereby the return to the caller does not happen until the new folder is replicated? I suspect from this post that the replication of structure changes is asynchronous, meaning that there can be a delay before a user connected to PFMB02 (non-primary) sees a change to the structure, while a user connected to PFMB01 (primary) sees the change immediately?

2. Can you explain the folder assignment logic? For example, one can call new-publicfolder -mailbox PFMB02 to create a folder and assign a content mailbox for that folder. Does the logic remain the same as written in the article? Does ever replica of the same folder have the same metadata with regards to the content mailbox?

0 Likes
Like
Not applicable
@Eriq VanBibber, here answers to questions

#3 For deploying larger PF trees, which usually happens during PF migration, yes; one must plan and create content mailboxes and decide placement of PF's; according to size of the individual PF size.

0 Likes
Like
Not applicable
I should have mentioned...i'm a developer of a mapi-based PF sync solution from www.priasoft.com. My questions come from that background.
0 Likes
Like