Turn on suggestions
Auto-suggest helps you quickly narrow down your search results by suggesting possible matches as you type.
Showing results for
Show  only  | Search instead for
Did you mean:
Generating user message profiles for use with the Exchange Calculators
By

Greetings Exchange Community! My name is Dan Sheehan, and I work as a Premier Field Engineer for Microsoft, specializing in Microsoft Exchange. Today I present to you the Generate Message Profile script which assists Exchange administrators/service owners with generating an Exchange “user message profile”. This message profile is a critical part of the information entered into the Exchange Server Role Requirements Calculator and the Exchange Client Network Bandwidth Calculator(more on those below). The script, which is published here on the TechNet Gallery, is designed to work in environments of all sizes, and has been tested in environments with hundreds of Exchange sites and servers. The current version works with the Management Shell of Exchange 2010 through Exchange 2016, and I am looking to create a one-off version for Exchange 2007. Without any further ado, on to the script.

An Exchange “user message profile” represents the amount of messages a user sends and receives in a day, and the average size of those messages. This critical information is used by the Role Requirements Calculator to determine the typical workload a group of users will place on an Exchange system, which in turn is used to properly size a new Exchange environment design. This information is also used by the Client Bandwidth Calculator to estimate potential bandwidth impact email users will have on the network, depending on their client type and versions used. Some Exchange service owners “guesstimate” a couple of different user message profiles based on the anticipated workload, while others use data from their existing environment to try and create a messaging profile based on recent user activity. Gathering the necessary information based on recent user activity and creating a user message profile is not an easy task, and quite often service owners turn to third-party tools for assistance with this process. This PowerShell script was created to assist Exchange service owners who want to generate average user message profiles based upon their current environment, but don’t have or want to use a third-party tool to gather the necessary information and generate a message profile. There are other messaging statistics gathering scripts published on the Internet, such as this this one by Mjolinor on the TechNet Gallery and this one by our own Neil Johnson (who BTW is responsible for the Client Bandwidth Calculator). Typically, those types of “messagestats” scripts create a per-user report of all messaging activity which takes a long time, includes information beyond what is required to create a user message profile, and the output requires further manipulation to come up with an average user message profile. The Generate Message Profile script on the other hand focuses on only gathering the messages sent and received by users, which is faster than gathering all messaging activity, and provides a user message profile per Exchange (AD) site versus individual user results.

The script uses native Exchange PowerShell cmdlets to extract the mailbox count from mailbox role servers and mailbox messaging activity from the Hub Transport role server message tracking logs for the specified date range. The information is then processed to obtain a per-site message profiles consisting of averages for sent messages, received messages, and message sizes. The script requires a start and end date, and can be run multiple times to accumulate groups/blocks of days into the final output. For instance, instead of gathering 30 straight days of data from the Exchange servers, which includes weekend days that generally negatively skew the averages due to reduced user load, the script can be run 4 consecutive times using the 4 groupings of weekdays within that 30 day period to help keep the averages reflective of a typical work day. The output to a CSV file can then be performed during the collection the 4th and final week, because the collection of message profiles are additive until the message profiles are exported to a CSV. The script can be run against Exchange servers in specific AD sites, collections of AD sites, or (the default) all AD sites, and the generated message profiles that are returned are organized by AD site name. The ability to specify a specific collection of AD sites is important for multi-site international Exchange deployments because not every location around the world follows a Monday through Friday work week. This selective site functionality can be combined with the script’s ability to accumulate and combine data from multiple data collections into a single report, even if some sites had to be queried using different date ranges. The script can optionally provide a “total” summary message profile for users across all collected sites using the site name of “~All Sites” (which will show up at the top of the output). The collected data can be exported to a CSV file at the end of each script run, otherwise it will be automatically stored as the PowerShell Console variable $MessageProfile for further manipulation or data collections. The script provides detailed output to the screen, including tiered progress bars indicating what site is currently being processed, how many server jobs in that site are being processed, and the running server processing results for that site. The script output also includes an execution time summary at the end so you can plan for timing of future data gathering efforts:

There are several script parameters (covered below) that can be used exclude certain types of mailboxes and messages from the data gathering and subsequent output of the script. For example, if you exclude all Journal data from the data gathering, then journal messages won’t be reflected resulting message profiles. This means the use of the words “all” and “total” below are in reference to the messages and mailboxes the script was told to gather and process, and not necessarily all of the data available on the servers. The data in the output is grouped into the following columns per Exchange site (as well as the optional “~All Sites” entry):

which will pop-up the window: 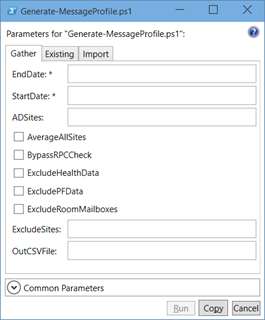 The script also supports the traditional -Verbose and -Debug switches in addition to what’s listed below:

NOTE: This list of parameters will be updated on the TechNet Gallery posting as the script is updated.

The following are just some examples of the script being used:

1. Process Exchange servers in all sites starting on Monday 12/1/2014 through the end of Friday 12/5/2014. Export the data, excluding the message data for Exchange 2013+ HealthMailboxes and any extest_ mailboxes, to the AllSites.CSV file:

2. Process Exchange servers in AD sites whose name starts with "East", starting on Monday 12/1/2014 through the end of Monday 12/1/2014 (I.E. It's data gathering for just one day). Output the additional Verbose and Debug information to the screen while the script is running. The collected data is available in the $MessageProfile variable after the script completes:

3. Process Exchange servers in the EastDC1 AD site, and any sites that start with the name "West", starting on Monday 12/1/2014 through the end of Tuesday 12/30/2014. Export the data, which should exclude most Public Folder traffic and all Journal messages, to the MultiSites.CSV file:

4. Import the data from the PreviousCollection.CSV file in the current working directory, and store it into the in-memory data collection $MessageProfile for future us::

5. Process the previously collected data stored in the in-memory $MessageProfile variable, and add an average for all sites to the collection as the site name "~All Sites":

2.     Is the output generated by this script an accurate representation of my users’ messaging profile, which I can use in other tools such as the Role Requirements Calculator?

3.     Should I inflate/enhance the message profile produced by this script to give myself some “elbow room” in my Exchange system design?

4.     The messaging profile for my users seems lower than I expected. What are some factors that could attribute to this/how can I increase the values generated by the script?

5.     Why did I get an alert that one or more sites were skipped or excluded?

6.     Why can’t I specify the hours of a day I want to be searched in addition to the days?

7.     Why does the EndBeforeDate need to be the day following the day I want to stop reporting on?

8.     Why would I want to store data in a CSV file and then later import it with the script?

9.     What is the purpose of the InMemory parameter?

10.  Why do I get an error about “inconsistent number of days” when I try to use the AverageAllSites?

11.  Why is the information saved to the $MessageProfile variable in the console if I don’t use the –OutToCSV parameter? Also how do I “wipe” the collected data from memory so I can start over?

$MessageProfile = $Null 12.  Why does the output of the script include a value called “TimeSpan” and also the time zone of the remote site?

13.  Why did you build in an ExcludePFData parameter switch if it doesn’t exclude all legacy Public Folder traffic?

14.  I see Equipment and Discovery mailboxes are excluded, why aren’t Arbitration Mailboxes excluded?

So there you have it, a PowerShell script to assist you with generating an average user message profile for your environment, with a number of options for you to tailor it to your preferences. I hope you find it useful with the two calculators, but also any future troubleshooting efforts of your existing environment. As I make enhancements or other changes to the script, I will be updating the TechNet Gallery posting. So please check back with that posting periodically. Lastly I am always open to suggestions and ideas, so please feel free to leave a comment here, on the TechNet Gallery submission, or reach out to me directly. Dan Sheehan Senior Premier Field Engineer