Turn on suggestions
Auto-suggest helps you quickly narrow down your search results by suggesting possible matches as you type.
Showing results for
Show  only  | Search instead for
Did you mean:
Exchange Server 2016 Architecture
By

In Exchange Server 2016, there is a single building block that provides the client access services and the high availability architecture necessary for any enterprise messaging environment. 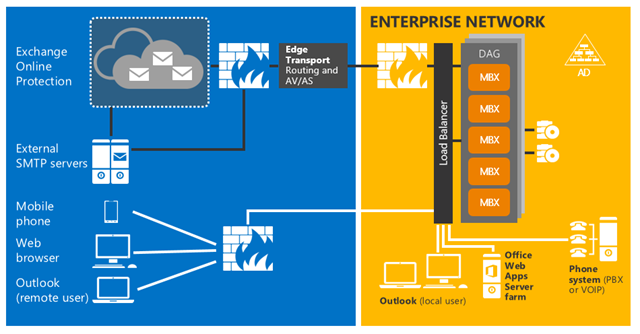 Figure 1: Building Block Architecture In our continuing quest to improve the product’s capabilities and simplify the architecture and its deployment, we have removed the Client Access server (CAS) role and added the client access services to the Mailbox role. Even without the CAS role, the system maintains loose coupling in terms of functionality, versioning, user partitioning and geographical affinity. The Mailbox server role now: No clients connect directly to the back-end endpoints on the Mailbox server; instead, clients connect client access services and are routed (via local or remote proxy) to the Mailbox server that hosts the active database that contains the user’s mailbox. Mailbox servers can be added to a Database Availability Group (DAG), thereby forming a high availability unit that can be deployed in one or more datacenters. DAGs in Exchange Server 2016 do have a few specific enhancements: Removal of the separate CAS role does not affect how communication occurs between servers. Communication between servers still occurs at the protocol layer, effectively ensuring that every server is an island. For a given mailbox’s connectivity, the protocol being used is always served by the protocol instance that is local to the active database copy.

Figure 3: Client Protocol Connectivity Now many of you may be thinking, wait how does authentication work? Well for HTTP, POP, or IMAP requests that use basic, NTLM, or Kerberos authentication, the authentication request is passed as part of the HTTP payload, so the Client Access services within each MBX server will authenticate the request naturally. Forms-based authentication (FBA) is different. FBA was one of the reasons why session affinity was required for OWA in previous releases of Exchange – the reason being that that the cookie used a per server key for encryption; so if another MBX received a request, it could not decrypt the session. With Exchange 2013, we stopped leveraging a per server session key and instead leveraged the private key from the certificate that was installed on the Client Access server. With Exchange 2016, we now leverage the organization certificate that is configured for the organization’s authorization configuration. This means that any Exchange 2016 server can decrypt the cookie. And yes, the Edge Transport server role will ship in Exchange Server 2016 (and at RTM, to boot!). All the capabilities and features you had in the Edge Transport server role in Exchange Server 2013, remain in Exchange Server 2016.

Why did we remove the Client Access server role?

The Exchange Server 2016 architecture evolves the building block architecture that has been refined over the course of the last several releases. With this architecture, all servers in the Exchange environment (excluding Edge Transport) are exactly the same—the same hardware, the same configuration, and so forth. This uniformity simplifies ordering the hardware, as well as performing maintenance and management of the servers. As with Exchange 2010 and in Exchange 2013, we continue to recommend role co-location as a best practice. From a cost perspective, the overall goal is to ensure that the architecture is balanced for CPU and disk. Having separate server roles can result in long-term cost disadvantages as you may purchase more CPU, disk, and memory resources than you will actually use. For example, consider a server that hosts only the Client Access server role. Many servers enable you to add a given number of disks in a very economical fashion—when you are deploying and using that number of disks, the cost is essentially zero. But if you deploy a server role that uses far less than the given number of disks, you’re paying for a disk controller that is either under-used or not used at all. This architecture is designed to enable you to have fewer physical Exchange servers in your environment. Fewer physical servers mean lower costs for a variety of reasons: This architecture ultimately distributes the load across a greater number of servers than deploying single-role servers because all Mailbox servers also handle client access because:

(Released in CU3): One of the challenging areas for on-premises environment was the amount of data that was replicated with each database copy in previous releases. In Exchange Server 2016, we have reduced bandwidth requirements between the active copy and a passive HA copy; to determine the bandwidth savings for your deployment configuration, you can leverage the Exchange Server Role Requirements Calculator. This was accomplished by enabling the local search instance to read data from its local database copy. As a result of this change, passive HA search instances no longer need to coordinate with their active counterparts in order to perform index updates. Another area of investment in search has been around decreasing the length of time to return search results, especially in online mode clients like OWA. This is accomplished by performing multiple asynchronous disk reads prior to the user completing the search term, which populates the cache with the relevant information, providing sub-second search query latency for online mode clients. 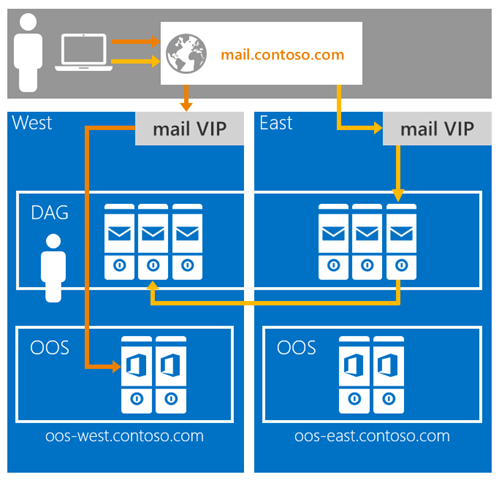 (scheduled for a future CU): Office 365 introduced the REST APIs (Mail, Calendar, and Contact APIs), and now these APIs are available in Exchange Server 2016. The REST APIs simplify programming against Exchange by providing a familiar syntax that is designed with openness (e.g., open standards support JSON, OAUTH, ODATA) and flexibility (e.g., granular, tightly scoped permission to access user data). These APIs allow developers to connect from any platform, whether it be web, PC, or mobile. SDKs exist for.NET, iOS, Android, NodeJS, Ruby, Python, Cordova, and CORS for use in single page JavaScript web apps. What about Exchange Web Services (EWS)? All existing applications that leverage EWS will continue to work with Exchange Server 2016. We are, however, focusing new platform investments on the REST APIs and the apps for Office extensibility model. We expect to make significantly fewer investments in EWS so that we can focus our resources on investing in a single modern API that will, over time, enable most of the scenarios that our partners currently use EWS.

During my session at Microsoft Ignite, I revealed Microsoft’s preferred architecture (PA) for Exchange Server 2016. The PA is the Exchange Engineering Team’s best practice recommendation for what we believe is the optimum deployment architecture for Exchange 2016, and one that is very similar to what we deploy in Office 365.

While Exchange 2016 offers a wide variety of architectural choices for on-premises deployments, this architecture is our most scrutinized one ever. While there are other supported deployment architectures, they are not recommended.

Exchange Server 2016 continues in the investments introduced in previous versions of Exchange by reducing the server role architecture complexity, aligning with the Preferred Architecture and Office 365 design principles, and improving coexistence with Exchange Server 2013. These changes simplify your Exchange deployment, without decreasing the availability or the resiliency of the deployment. And in some scenarios, when compared to previous generations, the PA increases availability and resiliency of your deployment. Ross Smith IV Principal Program Manager Office 365 Customer Experience