Turn on suggestions
Auto-suggest helps you quickly narrow down your search results by suggesting possible matches as you type.
Showing results for
Show  only  | Search instead for
Did you mean:
Exchange Server 2007 routing load balancing and fault tolerance
By

E2007 Routing employs several least cost deterministic algorithms to route emails to remote AD sites, connectors, remote Routing Groups etc. Some of these algorithms are explained in Exchange Server 2007 Active Directory Site and Connector Selection Algorithms. If there are multiple equal cost paths to a destination, E2007 routing does not load balance along these paths. Instead, it chooses one path and then routes all email using that path. The reason for this is to provide deterministic routing that facilitates easier troubleshooting of mail flow issues.

Once the path to a destination AD Site, connector, remote RG etc. has been chosen deterministically, there are several scenarios where load balancing and fault tolerance mechanisms come into play. This article describes those scenarios.

All these scenarios employ a consistent approach: If there are multiple candidate servers available (for example, multiple Hub Transport Servers in an AD site), then load balancing is accomplished using these servers in a round robin fashion. Fault tolerance is accomplished by failing over to a subsequent server in the list if the current server being attempted is unavailable.

Some scenarios where load balancing and/or fault tolerance are not supported are also called out.

When an SMTP connection is established from one AD site to another in order to transfer email, round-robin load balancing mechanism is employed using all the Hub servers in that remote AD Site. Fault Tolerance is achieved by failing over to another hub server in the AD Site if the first-choice Hub server is unavailable.

The discussion in this section applies to all types of send connectors (SMTP Send connectors, Foreign connectors, and Routing Group Connectors). It may be helpful to refer to send connector documentation here, here, and here if you are unfamiliar with some of the terminology used in this article.

In the example below, Connector, C1, is homed on Hub servers A and B in the local AD Site. Messages from server C to C1 are load balanced between A and B.

It should be noted that load balancing does not happen if the local transport server happens to be a source transport server of the connector. Local server proximity takes precedence over Local AD Site proximity and, therefore, mail is always routed using the local server. In the above diagram, if C1 also happens to be homed on C, then mails from C to C1 will be routed locally and are not relayed to A or B. 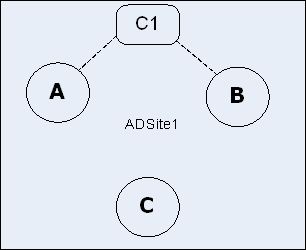 If multiple Edge Transport servers are subscribed to the same AD site using EdgeSync, a DNS connector with * address space is created homed on these Edge Transport Servers to route Internet email. If email is sent from another AD site to Internet, these emails are first relayed to the AD site where Edge servers are subscribed. Once the email arrives at an Hub Server in the subscribed AD Site, that Hub server will relay to one of the Edge servers that serve as the source transport server of the * DNS connector. Load balancing and fault tolerance are accomplished using these subscribed Edge Transport Servers.

Note: Inter-site relay is always between Hub servers. Hub servers in an AD Sites will not directly relay to the Edge Transport Server subscribed in another AD Site.

A brief description of how load balancing and fault tolerance described above works in the context of SMTP connection management is called for. Edge Connection Manager is the transport component that is responsible for establishing connections to remote servers (Hubs in a remote AD site, smart hosts etc.) using SMTP protocol.

Note: If C1 also happens to be sourced on E (in the local AD Site), then any email from ADSite3 to C1 will be routed using E and will not employ inter-site relay to ADSite1 or ADSite2. 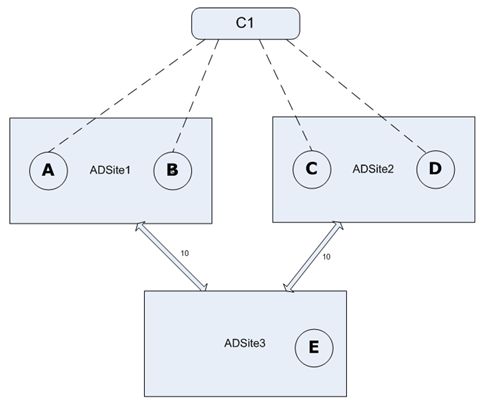 In the topology below, mail from ADSite1 to ADSite4 has two equal least cost paths – {1–2–4} and {1–3–4}. Path {1–2–4} is chosen because ADSite2 is alphanumerically lower than ADSite3 (see Exchange Server 2007 Active Directory Site and Connector Selection Algorithms for details). In this example, ADSite2 and ADSite3 are hub sites. 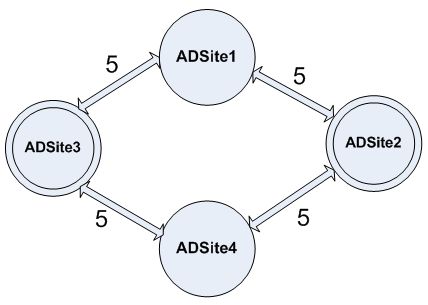 This means if mail cannot be relayed from ADSite1 to ADSite2 for any reason (such as due to network connectivity failure between ADSite1 and ADSite2), all mail to ADSite4 will be queued at ADSite1.