Turn on suggestions
Auto-suggest helps you quickly narrow down your search results by suggesting possible matches as you type.
Showing results for
Show  only  | Search instead for
Did you mean:
Exchange, Firewalls, and Support… Oh, my!
By

Exchange, Firewalls, and Support… Oh, my!

Over the years Exchange Server architecture has gone through a number of changes. As a product matures over time you may see us change what is supported as we react to changes in the product architecture, the state of technology as a whole, or major support issues we see come in through our support infrastructure.

I tried to get Harrison Ford to co-write this article with me given his specific talents, but alas he was busy and regretfully couldn’t partake. Please allow me to start with the short version up front so there is no confusion about what we currently DO and DO NOT support before I lose some of you to; 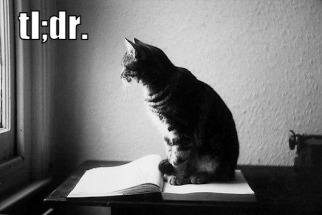 Why has this seemingly simple support statement become so muddied and confusing over the years? Maybe we didn’t make it blunt enough to start with, but there could be some other compounding points adding to the confusion.

Exchange Server 2003 was the last version of Exchange Server to allow deploying (at the time) a Front-End server in a perimeter network (aka DMZ) while locating the Back-End server in the intranet. While this could be made to work it required a specialized set of rules that essentially turned your perimeter network security model into the following: 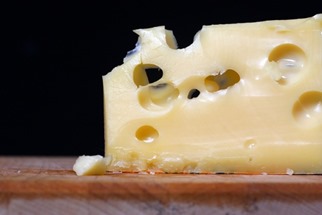 Image Courtesy of: The Internet

You could go from something complicated like this with endless port and protocol requirements…. 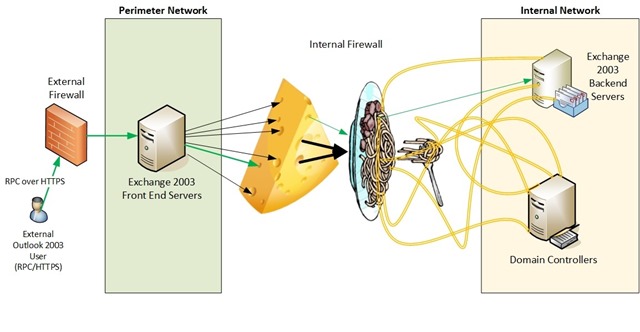 Figure 1: Legacy Exchange 2003 deployment with Front-End server in a perimeter network. What a mess. Who’s hungry?

Figure 2: Reverse proxy in the perimeter network and all Exchange servers within the intranet. Simplicity at its best!

The resulting increase in simplicity as well as the drop in support cases was strong enough for Microsoft to determine during the lifecycle of the next major version of Exchange Server, 2007, that we would no longer support deploying what is now the Client Access Server role in a perimeter network. From that time on all Exchange servers, except for Edge Transport Server role, were to be deployed on the intranet with unfettered access to each other. We do have this documented in http://technet.microsoft.com/en-us/library/bb232184.aspx.

TechNet includes a number of articles that document many if not all of the ports and protocols Exchange Server utilizes during the course of normal operation. These documents are often misunderstood as “configure your firewall this way” articles. The information is only being provided for educational purposes on the inner-workings of Exchange Server, or to aid with the configuration of load balancing or service monitoring mechanisms which often require specific port/protocol definitions to perform their functions correctly. In case you come across them in the future, here is a list of most of those articles.

This is a different story and yes there are things you can do here to remain supported. Exchange Server has for a number of revisions supported configuring static client communication ports for Windows based Outlook clients. After the client contacts the endpoint mapper service running on Windows under TCP Port 135 it will be handed back the static TCP port you have chosen to use in your environment. For Exchange Server 2010 you may be familiar with the following article describing how to configure static client communication ports for the Address Book Service and the RPC Client Access Service, thereby leaving you with 4 ports required for clients to operate in MAPI/RPC mode.

TechNet also has resources for versions prior to Exchange Server 2010: http://support.microsoft.com/kb/270836.

Starting in Exchange Server 2013 the only protocol supported for Windows Outlook clients is RPC over HTTPS. This architectural change reduces your required port count to one, TCP 443 for HTTPS, to be utilized by Autodiscover, Exchange Web Services, and RPC over HTTPS (aka Outlook Anywhere). This is going to make your life easy, but don’t tell your boss as they’ll expect you to start doing other things as well. It’ll be our secret. Promise. I’ll go through some examples of supported deployments, but will keep it easy and only use Outlook clients. The same ideas apply to other POP/IMAP/EAS clients as well, just don’t restrict Exchange servers from talking to each other. A setup like the following Outlook 2010 / Exchange 2010 diagram would be entirely supported where we have a firewall between the clients and the servers. In all of the following examples I have chosen static TCP port 59531 for my RPC Client Access Service on CAS and Mailbox, and static TCP port 59532 for my Address Book Service on CAS. UDP notifications are also thrown in for fun for those of you running Outlook 2003 in Online Mode, which I hope is very few and far between these days. Domain controllers were left out of these diagrams to focus on communication directly between clients and Exchange, and load balancers were also kept out for simplicity. 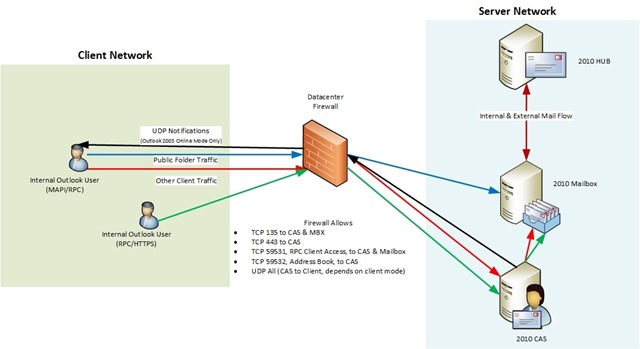 Figure 3: Firewall between clients and all Exchange servers. Supported if firewall is configured correctly to allow all necessary client access. AD not shown.

However, if you attempted to do something naughty like the following diagram and for reasons unknown to us put a firewall between CAS and Mailbox then there had better be ANY/ANY rules in place allowing conversations to originate from either side between Exchange servers.

Well what if you have multiple datacenters with Exchange and want to firewall everything everywhere because you believe that as the number of firewalls goes up your security must exponentially increase? We’ve got you covered there too, deploy it like this where you’ll see both MAPI/RPC and RPC/HTTPS user examples. I didn’t bother putting load balancers or Domain Controllers into any of these diagrams by the way. I’m putting faith in all of you that you know where those go. 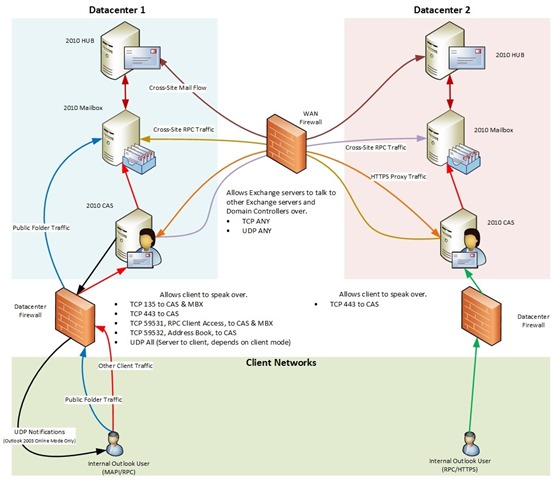 Boy this is going to be easy when all of you migrate to Exchange Server 2013 and are only dealing with RPC/HTTPS connections from clients and SMTP or HTTPS between servers. Except for maybe those pesky POP/IMAP/UM clients…

Figure 6 below depicts what Exchange 2013 network conversations may look like at a high level. A load balancer and additional CAS were introduced to show we don’t care what CAS a client’s traffic goes through as they all end up at the same Mailbox Server anyways where the user’s database is mounted. You may have read previously Exchange Server 2013 does not require affinity for client traffic and hopefully this visual helps show why.

The one tricky bit to consider if placing a firewall in between clients and Exchange Server 2013 would be UM traffic as it is not all client to CAS in nature. In Exchange Server 2013 a telephony device first makes a SIP connection through CAS (orange arrows) which after speaking with the UM Service on Mailbox Server will redirect the client so it may establish a direct SIP+RTP session (blue arrow) to the Mailbox Server holding the user’s active database copy for the RTP connection. 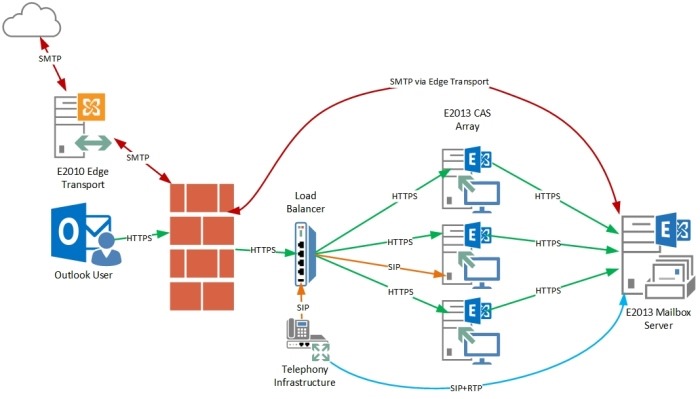 Figure 6: Showing at a high level SMTP, Windows Outlook Client, and UM traffic with a firewall between users and Exchange Server 2013.

So, Microsoft, if you’re saying this should be simple then what can I do and remain in a supported state?

The key here is to not block traffic between Exchange servers, or between Exchange servers and Domain Controllers. As long no traffic blocking is performed between these servers you will be in a fully supported deployment and will not have to waste time with our support staff proving you really do have all necessary communications open before you can start to troubleshoot an issue. We know many customers will continue to test the boundaries of supportability regardless, but be aware this may drag out your troubleshooting experience and possibly extend an active outage. We prefer to help our customers resolve any and all issues as fast as possible. Staying within support guidelines does in fact help us help you as expeditiously as possible, and in the end will save you time, support costs, labor costs, and last but not least aggravation.