Today, we released an updated version of the Exchange 2013 Server Role Requirements Calculator.

In addition to numerous bug fixes, this version includes new functionality: CPU utilization table, ReplayLagManager support, MaximumPreferredActiveDatabases support, Restore-DatabaseAvailabilityGroup scenario support, and guidance on sizing recommendations. You can view what changes have been made or downloadthe update directly. For details on the new features, read on.

In the above scenario, the worst failure mode is a site failure + 1 additional server failure (since this is a 4 database copy architecture).

ReplayLagManager is a new feature in Exchange Server 2013 that automatically plays down the lagged database copy when availability is compromised. While it is disabled by default, we recommend it be enabled as part of the Preferred Architecture.

Prior to version 7.5, the calculator only supported ReplayLagManagerin the scripts created via the Distribution tab (the Role Requirements and Activation Scenarios tabs did not support it). As a result, the calculator did not factor the lagged database copy as a viable activation target for the worst failure mode. Naturally, this is an issue because sizing is based on the number of active copies and the more copies activated on a server, the greater the impact to CPU and memory requirements.

In a 4-copy 2+2 site resilient design, with the fourth copy being lagged, what this meant in terms of failure modes, is that the calculator sized the environment based on what it considered the worst case failure mode – Site Failure (2 HA copies lost, only a single HA copy remaining). Using the CPU table above as an example, calculator versions prior to 7.5 would base the design requirements on 18 active database copies (site failure) instead of 22 active database copies (3 copies lost, lagged copy played down and being utilized as the remaining active).

ReplayLagManageris only supported (from the calculator perspective) when the design leverages:

Exchange 2010 introduced the MaximumActiveDatabasesparameter which defines the maximum number of databases that are allowed to be activated on a server by BCS. It is this value that is used in sizing a Mailbox server (and is defined the worst failure mode in the calculator).

In prior releases, the Distribution tab only supported the concept of Fail WAN, which allowed you to simulate the effects of a WAN failure and model the surviving datacenter’s reaction depending on the location of the Witness server. However, Fail WAN did not attempt to shrink the quorum, so if you attempted to fail an additional server you would end up in this condition: 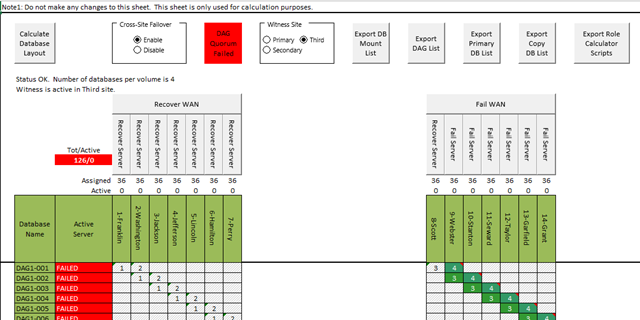 With this version 7.5 and later, the calculator adds a new mode: Fail Site.  When Fail Site is used, the datacenter switchover steps are performed (and thus the quorum is shrunk, alternate witness is utilized, if required, etc.) thereby allowing you to fail additional servers.  This allows you to simulate the worst failure mode that is identified in the Role Requirements and Activation Scenarios tabs. 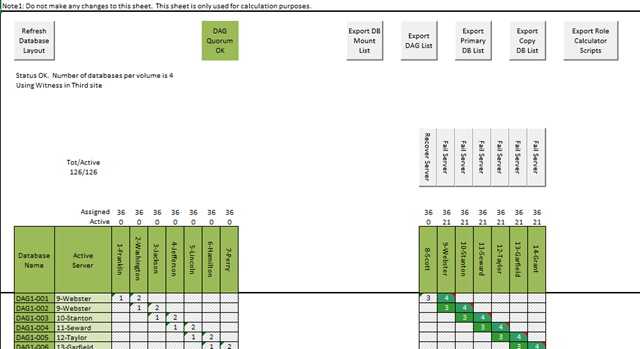 Note: In order to recover from the Fail Site mode, you must click the Refresh Database Layout button.

As Jeff recently discussed in Ask The Perf Guy: How Big Is Too Big?, we are now providing explicit recommendations on the maximum number of processor cores and memory that should be deployed in each Exchange 2013 server. The calculator will now warn you if you attempt a design that exceeds these recommendations.

As always, we welcome your feedback.

data 1GB, I suppose after 5 years with 100% retention, mailbox size should be 10GB (5GB+5x1GB). With current formula result is 30 Gb. It does not make any sense to me. Thank you. Mirek

Hello, where i can found the download file ? Thank you for your help