Exchange Server 2007 introduces a new mechanism for distributing Offline Address Books (OAB) that doesn't require Public Folders. It instead uses HTTP(S) and the Background Intelligent Transfer Service (BITS). There are several potential advantages of the new distribution mechanism including supporting more concurrent clients, reduced bandwidth usage, and more control over the distribution points. It is important to note that the new distribution mechanism requires Outlook 2007, but you can always choose to use both Public Folder Distribution and Web Based Distribution of OABs. That way, older clients can still access their OABs using Public Folders while Outlook 2007 clients can take advantage of the enhanced functionality.

The new web-based OAB distribution process depends on several components working together and without one of them will not function properly:

I think a few examples are in order to fully understand what is happening at a high level. The following diagram shows the topology which will be used for the examples. The assumption here is that all users have the same OAB and that OAB is distributed to all CAS servers. 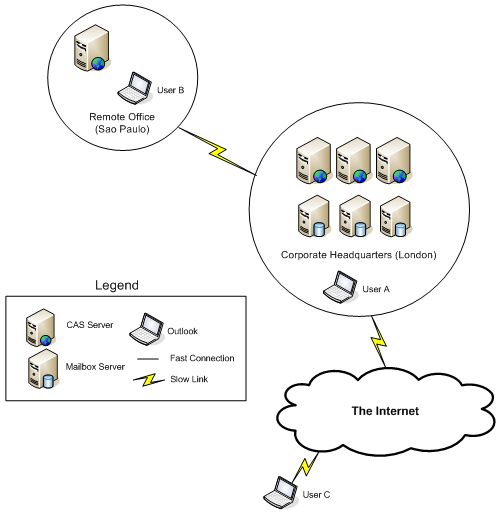 Before a user even connects, the following happens:

3) The Exchange File Distribution Service on the CAS server in Sao Paulo wakes up and copies the files over the slow link from the OAB Generation Server in London. This could take a while depending on the speed of the slow link. The new OAB is not made available until it is completely copied and verified

Note: Not all CAS servers will download the new OAB at the exact same time. There is a Poll Interval (default 8 hours) which starts the copying if there are new files. The first poll happens when the Exchange File Distribution Service starts, so the exact time a server polls will be different on each CAS server unless they all started up at the same time.

Once all of the CAS servers have the OAB, there are several user download scenarios:

User B's mailbox resides in the London site since there are no mailbox servers in the Sao Paulo office, but his OAB will be downloaded from the closest CAS server.

For any Internet user, the system has no idea where the closest CAS server is, so it defaults to a CAS server close to their mailbox server.

Each CAS server can handle a large number of concurrent connections since the download is happening via BITS and is being sent in small chunks at a time. Much of the bandwidth savings comes from only copying an OAB to a remote site once and then having clients at that site automatically download their OAB from there rather than using the site-link.

The OAB Virtual Directory supports direct connection as well as connections through ISA server. However, the BITS client does not support self-signed certificates so by default, OAB distribution points are created to use HTTP. You can enable SSL support if you provide a fully trusted certificate in IIS.