Turn on suggestions
Auto-suggest helps you quickly narrow down your search results by suggesting possible matches as you type.
Showing results for
Show  only  | Search instead for
Did you mean:
Configuring, validating and monitoring your Exchange 2007 storage
By

NOTE: The content of this article has been published in the official Exchange 2007 documentation. We recommend that you check the documentation for the most up-to-date version. Please go here: http://technet.microsoft.com/en-us/library/bb124518(EXCHG.80).aspx Edit: this post has been updated on 7/3/07, updates from previous versions are listed here. Introduction This is the final blog in my series about Exchange 2007 storage. In this blog I will tie together all of the content from previous blogs to outline our recommendations for configuring, validating, and monitoring your Exchange storage solution. There are four key objectives to this blog.

Capacity and performance are often at odds with each other when it comes to physical disks, and both must be considered before making a purchasing decision. The first concern is whether there will be enough space to store all of the data. The second concern is that the transactional I/O must be measured or predicted to ensure that the solution also meets the performance requirements for acceptable disk latency and a responsive end user experience. The third concern, is to ensure that the non transactional I/O has both enough time to complete, and enough disk performance and throughput to meet the required service level agreement (SLA). The Holy Grail is to take these three parts and find a balance in the design of the actual hardware to meet all four objectives. Capacity Having enough capacity is absolutely critical. When a database LUN runs out of space, the databases on that LUN will dismount. When a transaction log LUN runs out of space, it will cause all of the databases in that storage group to dismount. Provisioning additional space is often hard to do quickly, and performing an offline compaction could take a long time. In most cases running out of disk space will result in an interruption of availability for one or more databases for a period of time that typically exceeds most recovery time objectives (RTO). Mailbox Size\Mailbox Count The first metric to understand is mailbox size. The amount of data an end user is allowed to store in their mailbox will help in determining how many users can be housed on the server. While final mailbox sizes and quotas can and do change, having a goal in mind is the first step in determining your needed capacity. For example, if you have 4000 users on a server with a 250MB mailbox quota, then you need at least 1TB of disk space. Moreover, there are additional components which must be factored into the equation. If a hard limit is not set on the mailbox quota, it is difficult to estimate the how much capacity you will need. Database Whitespace The database size on the physical disk isn't just the number of users multiplied by the user quota. When the majority of users are not near their mailbox quota, the databases will consume less space and whitespace isn't a capacity concern. The database itself will always have free pages, or whitespace, spread throughout. During online maintenance, items marked for removal from the database are removed, freeing up these pages. The percentage of whitespace is constantly changing with the highest percentage immediately after online maintenance, and the lowest percentage right before online maintenance. The whitespace in the database can be approximated by the amount of mail sent and received by its users. For example, if you have 100 - 2GB mailboxes (200GB) in a database that send and receive an average of 10MB of mail per day, the whitespace would be approximately 1GB (100*10MB). Whitespace can grow beyond any approximation if online maintenance is not able to complete a full pass. It is important that enough time is allocated for online maintenance to run each night, so that a full pass can complete within one week or less. Database Dumpster Each database has a dumpster that stores hard deleted items. By default, items are stored for 7 days in Exchange 2003, and 14 days in Exchange 2007. These include items that have been purged from the deleted items folder. Exchange 2007 will increase the overhead consumed by the database dumpster, because deleted items will now be stored for twice as long. After the retention period has passed, these items will be removed from the database during an online maintenance cycle.  Eventually, a steady state will be reached where your dumpster size will be equivalent to 2 weeks worth of incoming mail as a percentage of your database size.  The exact percentage will depend on the amount of mail deleted and on individual mailbox sizes.  The dumpster will add a percentage of overhead to the database dependent upon the mailbox size and the message delivery rate for that mailbox.  For example, with a constant message delivery rate of 52MB a week, a 250MB mailbox would store approximately 104MB in the dumpster adding a 41% overhead.  A 1GB mailbox storing the same 104MB in the dumpster would add a 10% overhead. Database Size Over time, user mailboxes will reach the mailbox quota, so an amount of mail equivalent to the incoming mail will need to be deleted in order to remain under the mailbox quota.  This means that the dumpster will increase to a maximum size equivalent to two weeks' worth of incoming mail.  If the majority of users have not reached the mailbox quota, only some of the incoming mail will be deleted, so the growth will be split between the dumpster and the increase in mailbox size.  For example, if you take a 250MB very-heavy message profile mailbox that receives 52MB of mail per week (average message size 50KB), you'd have 104MB in the dumpster (41%), and 10MB in whitespace for a total mailbox size of 364MB.  The other extreme could be a 2GB very-heavy message profile mailbox that received 52MB of mail per week, and then you'd have 104MB in the dumpster (5%), and 10MB in whitespace for a total mailbox size of 2.11GB.  Fifty 2GB mailboxes in a storage group would be 105.6GB.

Here is a formula to show database size with the 2GB mailbox example: 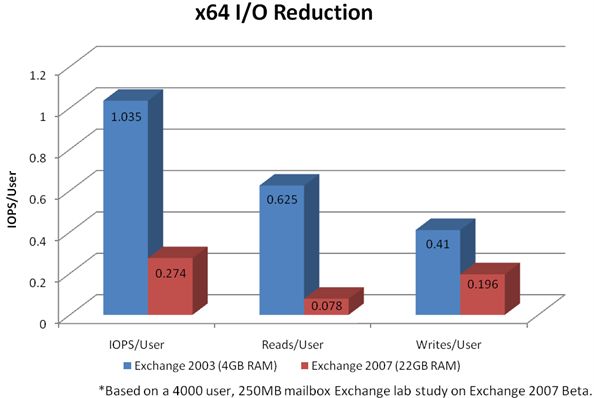 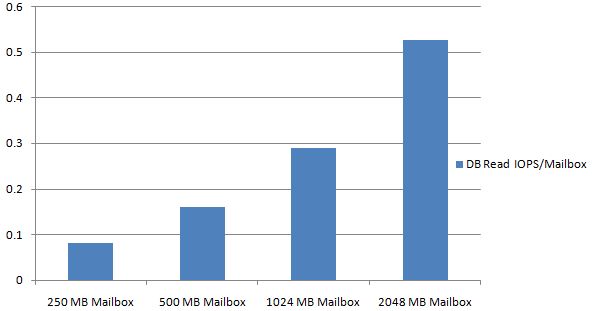 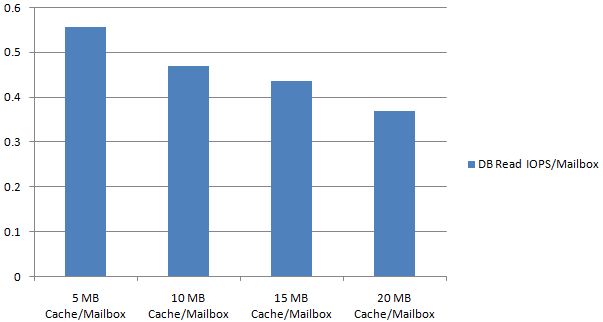 On most storage, there is a way to see performance metrics, and monitoring these metrics can catch performance issues early, before they bubble up to the Exchange Server. If available, MOM integration from the storage vendor can assist in making sometimes proprietary metrics easy to understand. Some of the general metrics to keep an eye on are: Summary The goal is to reduce cost and complexity while enabling large mailboxes. The transactional I/O in Exchange 2007 has been greatly reduced, particularly database reads. CCR enables non-shared storage clustering & large mailboxes. Features such as content indexing and MRM help manage large mailboxes. Exchange 2007 storage solutions are different, yet the validation and monitoring is the same. It is no longer just about the IOPS per user. The number of users and storage groups on a server, as well as the amount of database cache (RAM) has a significant effect on server I/O. The capacity and the non-transactional I/O requirements must be balanced with the transactional I/O needs. - Robert Quimbey
0 Likes
Like
16 Comments