We all know that email distribution groups (DGs) are great for easily sharing information or engaging in discussions with a large group of people. Whether it is a DG for business-related discussions or a DG about upcoming yard sales this weekend, DGs have been a helpful part of email life since the beginning of... well... email. Yet, the amount of traffic for some DGs can overload your inbox and become a distraction from all the other important tasks of your job. How do you handle this torrent of enticingly distracting DG messages?

One way is to create an Inbox rule to move messages sent to the DG to a specific folder, so instead of a flood of messages in your inbox, you can automatically store them in a folder for later review. However, sender behavior can break this process. To reduce the noise generated by Reply All’s to a DG message, some senders add the DG to the BCC line. This stops Reply All’s to the DG but is also considered bad email etiquette. And for privacy reasons, Inbox rules don't evaluate anything on the BCC line, so the message ends up as noise in your inbox instead of going to special folder you created.

Twice a year at Microsoft we let our developers go wild and come up with innovative features or new tech outside of their normal work. A few Exchange Transport engineers who were dedicated members of an internal "for sale / want to buy" DG had this exact problem: people would BCC the DG so these emails would bypass Inbox rules and land in inboxes as unwanted noise during the business day. So, these devs-gone-wild came up with a solution to block messages when the DG is on the BCC line.

Admins can now thwart people from adding a DG to the BCC line with a new "-BccBlocked" switch on the Set-DistributionGroup cmdlet:

When -BccBlocked is set to true and senders add the DG to the BCC line and click send, they'll receive an NDR telling them they can't do that: 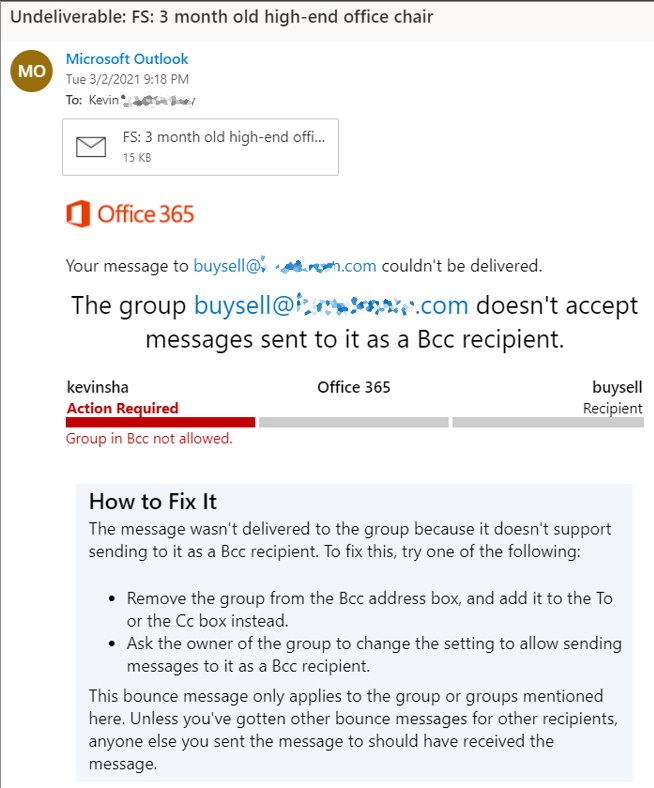 To send the message to the DG they'll have to put it on the To or CC lines.

Blocking DG BCC is optional and set to False by default on all DGs. Getting the current state of BccBlocked for a DG is as simple as:

The feature has been deployed worldwide. Note that this feature only applies to members within the same organization - external senders will not be blocked. It for nested DGs it will only block members of the top-level DG.

While we intend to expose the management of this setting in the Exchange admin center later this year, for now it's only available via Remote PowerShell. "What about Microsoft 365 Groups?" you might ask. While there are a lot of large DGs out there that can likely benefit most from this, we're also looking to expand this to Microsoft 365 Groups at some time in the future. We'd love to hear your feedback in the comments below about how useful you think this might be for Microsoft 365 Groups, or about anything else about this feature!