During a rousing presentation that was marked by wild cheers and standing ovations, we announced a few features designed to simplify hybrid Exchange deployments and speed onboarding to Exchange Online (EXO). The features we discussed focused on two key problems, hybrid administration and configuration as customers prepare to move to the cloud and the complexities and security blockers some customers face when publishing their on-premises environments. Let’s review.

Back in June, we launched Organization Configuration Transfer (OCT). The idea is to take the configurations made in Exchange Server on-premises and transfer them to Exchange Online to reduce the burden of re-configuring all your settings before onboarding. Today we announced OCTv2, due out October 2018.

What does OCTv2 do?

First and foremost, seven additional objects have been added to OCT as part of v2. But the real difference in v2 is how we deal with object conflicts. In OCTv1, we run a bunch of new-* commands and when we find an object on-prem that matches and object with the same name in the cloud, we simple skip over it. As part of v2, if an object with the same name already exists both on-premises and online, you can now choose to either overwrite the values of the objects in EXO or keep them as is. And, just in case you overwrite the cloud settings and didn’t mean to, we’ve provided a rollback script to undo those changes.

What are the Exchange Server Versions supported?

OCT supports Exchange Server 2016, 2013 and 2010. OCT requires the latest cumulative update or update roll-up available for the version of Exchange you have installed in the on-premises organization. But if that’s really too much of a burden, the immediate previous release is also supported. You want to run any other CUs or RUs, you’re out of luck. Exchange Server 2019 will be supported once it reaches GA.

To establish a hybrid Exchange environment, customers must publish their on-premises environments. This includes, but is not limited to, adding external DNS entries, updating certificates, and allowing inbound network connections through your firewall. Over time, we’ve learned of two consistent problems here, (1) this is hard for some customers. The number of support cases asking for help in these areas tells us that. And (2) some customers, really their security wonks, do not want to publish their on-premises environments to the internet. The Microsoft Hybrid Agent Today, we introduced the world to the Hybrid Agent. Put simply, the goal of the Hybrid Agent is to fix those customer problems. Now, when running the Hybrid Configuration Wizard (HCW) you are presented with the option to use Exchange Modern Hybrid 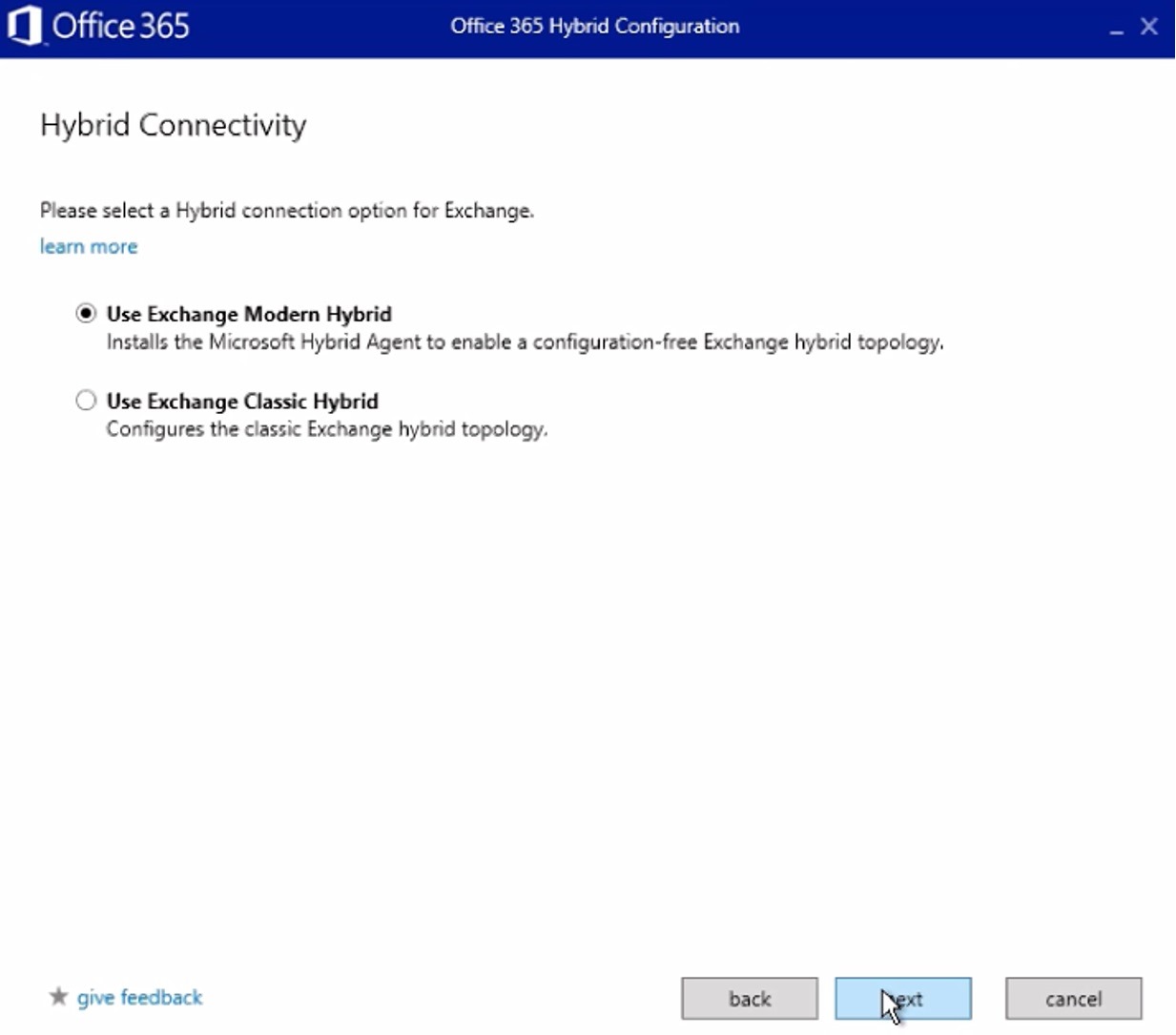 This will install an agent, built on the same technology as Azure Application Proxy, this will publish your Exchange on-premises environment to EXO without requiring any of the changes customers have struggled with.

V1 of the Hybrid Agent will support the core scenarios of mailbox moves and free/busy for your hybrid deployment and is in private preview now. We’re focused on getting to public preview and GA as quickly as possible. In the meantime, we’re also working on additional scenarios we can support with the Hybrid Agent.

Well, if you missed the session at Ignite, go back and watch the replay (when available). Then come back here and stay tuned for updates. Kavya Chandra, Georgia Huggins
0 Likes
Like
Share
24 Comments
Not applicable
To really make networks and security happy would it be possible to extend this to inbound to on-premises SMTP traffic as well?
0 Likes
Like
Not applicable
Awesome work, guys! As someone who performed his first hybrid migration with Exchange 2010 SP1 and that very long whitepaper, I really wish we had something like this before. New migrations will definitely be a lot smoother.

Maybe I missed it, but what Exchange versions are supported with the Hybrid Agent?

I would speculate that it should be possible, as the mailbox migration already implies the local Active Directory being updated from the cloud. Having an Exchange OnPrem for editing Exchange attributes is the reason to keep it, but if the Hybrid Agent already edits (at least some) of those attributes, it should be straightforward enough :)

"We’re in Private Preview for the agent as we announced at Ignite – once that’s done we’ll move on to a Public Preview. That’s planned for the first quarter of next year"