With the growing trend toward desktop virtualization, it is Microsoft’s goal to provide enterprises with a flexible model for centralized computing, whereby the broadest range of client devices can help securely access company data and applications from any location on the network.

As with Remote Desktop Services in Windows Server 2008 R2, virtual machine-based desktop virtualization faces increasing performance challenges when enterprises attempt to use this technology to support a globally distributed workforce. A key consideration of performance relates to Remote Desktop protocol efficiency which continues to present an issue for bandwidth constrained environments. This limitation can manifest itself by limiting the number of users who can access virtualized desktops (user density) over available bandwidth, and with a degraded user experience. Remote Desktop Protocol (RDP) 7.0, similar to previous RDP versions, provides a competitive experience for low bandwidth (e.g. 56 Kbps) connections. After bandwidth requirements, network latency is the second fundamental challenge for customers and partners that wish to deploy virtualized desktops for a broad range of end-users and applications.

With the release of the Windows Server® 2008 R2 and Windows® 7 operating systems, RDP 7.0 is even more feature-rich than its predecessors—enabl ing new remoting functionality such as accelerated bitmap rendering, multi-media redirection streaming, and network topology awareness. In short, RDP 7.0 is better able to support today’s ever increasingly complex and rich multi-media environment.

To improve the user experience when connecting over high latency networks, RDP 7.0 added “client hint” functionality. “Client hint” can be enabled by using the Remote Desktop Connection (RDC) 7.0 client UI to set the connection speed on the Experience tab. 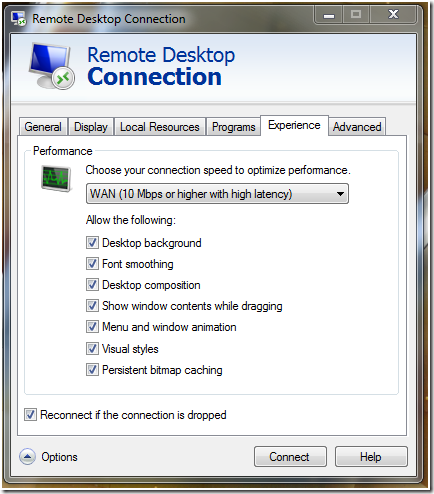 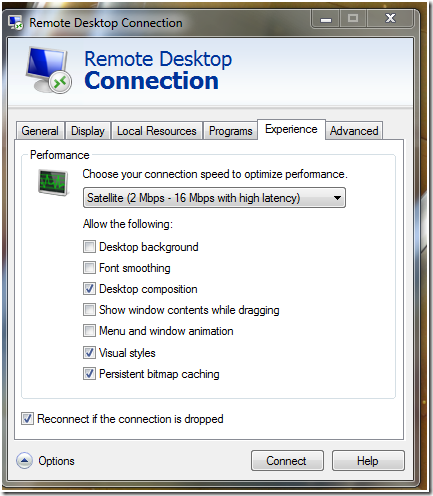 As these features become integrated into the enterprise environment, it is important to analyze and understand their impact on enterprises’ current network infrastructure and end-user experience. The Remote Desktop Protocol Performance Improvements in Windows Server 2008 R2 and Windows 7 white paper details RDP features and the potential for improvements to usability and the quality of the end-user remoting experience, as well as system deployment metrics.

Note: You should not interpret the performance characteristics presented in the white paper as benchmark measurements that all systems can support. Only empirical testing on the target system can provide an accurate benchmark of your specific scenario.