Turn on suggestions
Auto-suggest helps you quickly narrow down your search results by suggesting possible matches as you type.
Showing results for
Show  only  | Search instead for
Did you mean:
New resources for educators and students
By

New resources for educators and students

Microsoft Learn Student Ambassadors help peers learn things they care about most, from social issues to new technologies. Ambassadors get a first look at new Microsoft technologies, gain leadership skills, and receive mentoring from professionals in the industry, and their peers benefit from their knowledge, which can now be shared via the Microsoft Learn platform. All our incoming 2020 interns are invited to join the Student Ambassadors and it’s open to any higher-ed student who wants to apply.

New hub on Microsoft Learn for educators and students 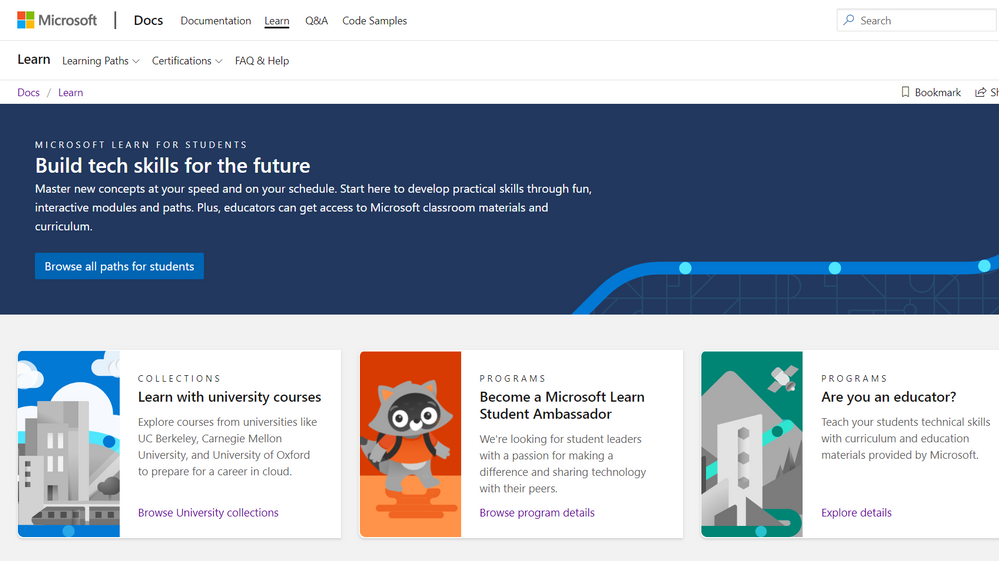 Microsoft Learn now has a new home for educators and students.

Hot off the presses is the celebrated Data 8 – Foundations of Data Science content from Berkeley, adding to our collection of university content:

We continue to offer foundational developer paths designed especially for students that faculty can easily teach in the classroom.

A new series of learning paths to inspire and challenge students to build with social impact and responsibility in mind. This content takes a solution-driven, project-based approach to learning:

Last year, we launched a 44-part video series called Python for Beginners, consisting of short lessons aimed to help students learn Python and then build AI apps on Azure. People kept asking for more, so we’ve expanded it with 50 additional new videos that dive deeper into the popular Python libraries like NumPy, Pandas, and Scikit-learn.

The Imagine Cup will help kick off Microsoft Build on Tuesday, following Satya’s opening, and we will have over 30 tailored sessions in the Student Zone including content on Minecraft, MakeCode, VS Code and GitHub, plus a live coding session with Scott Hanselman and a high school student who attended Build last year and was so motivated that she’s spent the last year learning to code! We’ll also have content from partners including NASA, Crazy Aunt Lindsey of the FabLab, and Twitch’s comfiest coder, Instafluff.  The new class of 2020 interns will be joining us at Build for the first time, and we’ll have a behind-the-scenes screening of last year’s viral intern hit, Microsoft the Musical, with some of the cast and writers!