Deep Reinforcement learning to train an intelligent agent for autonomous systems with Bons.ai

Deep Reinforcement learning to train an intelligent agent for autonomous systems with Bons.ai

Learn how to simplify the design, development and deployment of intelligent agents for your autonomous systems using project bonsai. You'll learn concepts such as Machine Teaching and deep reinforcement learning are using to build bonsai brains on the platform.

During this session the team will provide real world scenarios of how project bonsai is being used in the industry. This session will introduce the concepts of Machine teaching and how we can use it together with Deep Reinforcement learning to train an intelligent agent for autonomous systems on Microsoft’s Project Bonsai.

Who is it aimed at? Engineers/Developers/Anyone interested in AI & Autonomous systems. 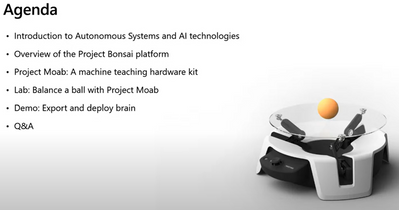 Watch On Demand
You’ll learn what makes autonomous systems different from other forms of AI and how you can build your autonomous AI on Microsoft project Bonsai.

Josh Ndemenge
Josh is a cloud developer advocate for Data at Microsoft who has a passion for building solutions that solve immediate problems in the society using Hardware (Electronics) Engineering, Data & AI.

John Alexander
John is a Sr. Machine Teaching Advocate on the Microsoft Autonomous Systems team. John has a passion for designing and building accessible experiences using machine learning coupled with vision, voice, touch, and virtual/mixed reality. He speaks regularly at conferences and is the co-founder of Kansas City .NET Meetup and KC Windows Mixed Reality meetup (now part of KCVR). Based in Kansas City, Missouri USA, John loves to paint, draw, game, do voiceovers, and spend time with his spouse and three children on all sorts of adventures.