Turn on suggestions
Auto-suggest helps you quickly narrow down your search results by suggesting possible matches as you type.
Showing results for
Show  only  | Search instead for
Did you mean:
Time Zone Update for Azerbaijan
By

First published on TECHNET on Mar 22, 2016
The government of Azerbaijan recently announced that they will not be observing DST this year. DST was previously scheduled to begin on March 27 th , 2016. Microsoft is preparing an update to Windows which will reflect this change. We anticipate an update to be available on Tuesday, May 10, 2016.


Though we plan to release a data update, there is insufficient lead before the time change goes into effect.  Therefore, we offer the following guidance temporary workaround until such an update can be properly created, tested, distributed, and installed.

Our official policy statement can be found on the site at http://microsoft.com/time .

Until an update is made available, we recommend our customers to continue using time zone “(UTC +04:00) Baku” and turn off the “Adjust for daylight saving time automatically” setting. This can be done in advance as DST is currently not in effect. 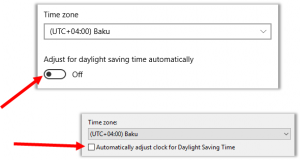 Once the update is available, we recommend users to turn this setting back on as it will properly account for DST in prior years while leaving it out for the current year.
0 Likes
Like