I find having a checklist can be a great tool to use not only when reviewing an existing Hyper-V implementation, but one which can be leveraged as part of pre-planning stages, to ensure best practices are implemented from the start.

It’s important to note this is not an exhaustive compilation, rather a grouping of features/options commonly used in businesses I’ve had the pleasure of assisting.

A special thanks to Ted Teknos, Ryan Zoeller and Rob Hefner for their input/suggestions/corrections as I put this together!

Disclaimer: As with all Best Practices, not every recommendation can – or should – be applied. Best Practices are general guidelines, not hard, fast rules that must be followed. As such, you should carefully review each item to determine if it makes sense in your environment. If implementing one (or more) of these Best Practices seems sensible, great; if it doesn't, simply ignore it. In other words, it's up to you to decide if you should apply these in your setting.

⎕ Ensure hosts are up-to-date with recommended Microsoft updates, to ensure critical patches and updates – addressing security concerns or fixes to the core OS – are applied.

⎕ Ensure all applicable Hyper-V hotfixes and Cluster hotfixes (if applicable) have been applied. Review the following sites and compare it to your environment, since not all hotfixes will be applicable:

⎕ Ensure hosts have the latest BIOS version, as well as other hardware devices (such as Synthetic Fibre Channel, NIC’s, etc.), to address any known issues/supportability

⎕ Host should be domain joined, unless security standards dictate otherwise. Doing so makes it possible to centralize the management of policies for identity, security, and auditing. Additionally, hosts must be domain joined before you can create a Hyper-V High-Availability Cluster.

⎕ RDP Printer Mapping should be disabled on hosts, to remove any chance of a printer driver causing instability issues on the host machine.

⎕ Do not install any other Roles on a host besides the Hyper-V role and the Remote Desktop Services roles (if VDI will be used on the host).

⎕ The only Features that should be installed on the host are: Failover Cluster Manager (if host will become part of a cluster), Multipath I/O (if host will be connecting to an iSCSI SAN, Spaces and/or Fibre Channel). (See explanation above for reasons why installing additional features is not recommended.)

⎕ Default path for Virtual Hard Disks (VHD/VHDX) should be set to a non-system drive, due to this can cause disk latency as well as create the potential for the host running out of disk space.

⎕ If you choose to save the VM state as the Automatic Stop Action, the default virtual machine path should be set to a non-system drive, due to the creation of a .bin file is created that matches the size of memory reserved for the virtual machine.  A .vsv file may also be created in the same location as the .bin file, adding to disk space used for each VM. (The default path is: C:\ProgramData\Microsoft\Windows\Hyper-V.)

⎕ If you are using iSCSI: In Windows Firewall with Advanced Security , enable iSCSI Service (TCP-In) for Inbound and iSCSI Service (TCP-Out) for outbound in Firewall settings on each host, to allow iSCSI traffic to pass to and from host and SAN device. Not enabling these rules will prevent iSCSI communication.

To set the iSCSI firewall rules via netsh, you can use the following command:

⎕ Ensure latest NIC drivers have been installed on the host, which resolve known issues and/or increase performance.

⎕ NICs should not use APIPA (Automatic Private IP Addressing). APIPA is non-routable and not registered in DNS.

⎕ VMQ should be enabled on VMQ-capable physical network adapters bound to an external virtual switch.

⎕ Jumbo frames should be turned on and set for 9000 or 9014 (depending on your hardware) for CSV, iSCSI and Live Migration networks. This can significantly increase throughput while also reducing CPU cycles.

⎕ NICs used for iSCSI communication should have all Networking protocols (on the Local Area Connection Properties) unchecked, with the exception of:

⎕ NIC Teaming should not be used on iSCSI NIC’s. MPIO is the best method. NIC teaming can be used on the Management, Production (VM traffic), CSV Heartbeat and Live Migration networks.

⎕ If you are using NIC teaming for Management, CSV Heartbeat and/or Live Migration, create the team(s) before you begin assigning Networks.

⎕ If using aggregate (switch-dependent) NIC teaming in a guest VM, only SR-IOV NICs should be used on guest.

⎕ If using NIC teaming inside a guest VM, follow this order:

⎕ When creating virtual switches, it is best practice to uncheck Allow management operating system to share this network adapter , in order to create a dedicated network for your VM(s) to communicate with other computers on the physical network. (If the management adapter is shared, do not modify protocols on the NIC.)

Please note: we fully support and even recommend (in some cases) using the virtual switch to separate networks for Management, Live Migration, CSV/Heartbeat and even iSCSI.  For example two 10GB NIC’s that are split out using VLANs and QoS.

** CSV/Heartbeat & Live Migration Networks can be crossover cables connecting the nodes, but only if you are building a two (2) node cluster. Anything above two (2) nodes requires a switch. **

⎕ Turn off cluster communication on the iSCSI network.

⎕ Redundant network paths are strongly encouraged (multiple switches) – especially for your Live Migration and iSCSI network – as it provides resiliency and quality of service (QoS).

⎕ If aggregate NIC Teaming is enabled for Management and/or Live Migration networks, the physical switch ports the host is connected to should be set to trunk (promiscuous) mode. The physical switch should pass all traffic to the host for filtering.

⎕ Turn off VLAN filters on teamed NICs. Let the teaming software or the Hyper-V switch (if present) do the filtering.

⎕ Legacy Network Adapters (a.k.a. Emulated NIC drivers) should only be used for PXE booting a VM or when installing non-Hyper-V aware Guest operating systems. Hyper-V's synthetic NICs (the default NIC selection; a.k.a. Synthetic NIC drivers) are far more efficient, due to using a dedicated VMBus to communicate between the virtual NIC and the physical NIC; as a result, there are reduced CPU cycles, as well as much lower hypervisor/guest transitions per operation.

⎕ Disk used for CSV must be partitioned with NTFS. You cannot use a disk for a CSV that is formatted with FAT, FAT32, or Resilient File System (ReFS).

⎕ Unless your storage vendor has a different recommendation, disks used for VHD/VHDx files, including CSV’s, should use 64K formatting (Allocation Unit Size).   (added 09/02/2014)

⎕ Use caution when using snapshots. If not properly managed, snapshots can cause disk space issues, as well as additional physical I/O overhead. Additionally, if you are hosting 2008 R2 (or earlier) Domain Controllers, reverting to an earlier snapshot can cause USN rollbacks . Windows Server 2012 has been updated to help better protect Domain Controllers from USN rollbacks; however, you should still limit usage.

⎕ It is not supported to create a storage pool using Fiber Channel or iSCSI LUNs.

⎕ Page file on Hyper-V Host should managed by the OS and not configured manually.

⎕ New disks should use the VHDX format. Disks created in earlier Hyper-V iterations should be converted to VHDX, unless there is a need to move the VHD back to a 2008 Hyper-V host.

⎕ Use Dynamic Memory on all VMs (unless not supported).

⎕ Guest OS should be configured with (minimum) recommended memory

⎕ Set preferred network for CSV communication, to ensure the correct network is used for this traffic. (Note: This will only need to be run on one of your Hyper-V nodes.).

(NOTE: I n order to configure CSV Redirected Access over one particular cluster network, SMB Multichannel will have to be disabled.)

*** Set preferred network for Live Migration, to ensure the correct network(s) are used for this traffic:

⎕ The Host Shutdown Time (ShutdownTimeoutInMinutes registry entry) can be increased from the default time, if additional time is needed to be certain local VMs have had enough time to shut down before the host reboots. 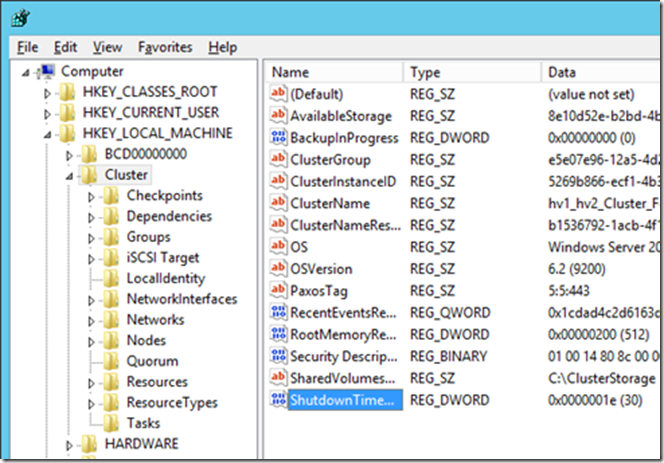 ⎕ Run the Cluster Validation periodically to remediate any issues

⎕ Consider enabling CSV Cache if you have VMs that are used primarily for read requests, and are less write intensive. Scenarios such as Pooled VDI VMs; also can be leveraged for reducing VM boot storms.

⎕ Update inbound traffic on the firewall to allow TCP port ‘80’ and/or port ‘443’ traffic. (In Windows Firewall, enable “Hyper-V Replica HTTP Listener (TCP-In)” rule on each node of the cluster.

To enable HTTP (port 80) replica traffic, you can run the following from an elevated command-prompt:

To enable HTTPS (port 443) replica traffic, you can run the following from an elevated command-prompt:

⎕ Virtual hard disks with paging files should be excluded from replication, unless the page file is on the OS disk.

⎕ Test failovers should be performed monthly, at a minimum, to verify that failover will succeed and that virtual machine workloads will operate as expected after failover

⎕ Feature and performance optimization of Hyper-V Replica can be further tuned by using the registry keys mentioned in the article below:

⎕ Place all Cluster-Aware Updating (CAU) Run Profiles on a single File Share accessible to all potential CAU Update Coordinators. (Run Profiles are configuration settings that can be saved as an XML file called an Updating Run Profile and reused for later Updating Runs. http://technet.microsoft.com/en-us/library/jj134224.aspx

⎕ An Active Directory infrastructure is required, so you can grant permissions to the computer account of the Hyper-V hosts.

⎕ Loopback configurations (where the computer that is running Hyper-V is used as the file server for virtual machine storage) are not supported. Similarly, running the file share in VM’s that are hosted on compute nodes that will serve other VM’s is not supported.

⎕ Important: See “Use caution when using snapshots” under the Disk section for more information regarding snapshots .

⎕ Ensure Integration Services (IS) have been installed on all VMs. IC's significantly improve interaction between the VM and the physical host.

⎕ If your SAN supports ODX, you should strongly consider enabling ODX on your Hyper-V hosts, as well as any VMs that connect directly to SAN storage LUNs.

IMPORTANT: VHD-based or VHDX-based virtual disks attached to a virtual IDE controller do not support this optimization because integrated development environment (IDE) devices lack support for Offloaded Data Transfer. The virtual hard drive needs to be connected to the virtual machine via a virtual SCSI controller. (added 04/22/2014)

⎕ If you are converting VMware virtual machines to Hyper-V, consider using MVMC (a free, stand-alone tool offered by Microsoft.

I sincerely hope you find this blog posting useful! If you do, please forward the link on to others who may benefit!