Turn on suggestions
Auto-suggest helps you quickly narrow down your search results by suggesting possible matches as you type.
Showing results for
Show  only  | Search instead for
Did you mean:
Windows PowerShell and DSC on Linux in Microsoft Azure
By

Windows PowerShell and DSC on Linux in Microsoft Azure

Hello everyone! I'm Preston K. Parsard, Platforms PFE and I'd like to talk about running PowerShell and Desired State Configuration (DSC) on Linux in Microsoft Azure. Just in case you haven't heard yet, PowerShell has been open sourced and released for Linux since 18 August, 2016. More details and other resources for the announcement can be found here . If you are new to DSC in general, you may want to first hop over to one of the posts my colleage Dan Cuomo wrote about for a quick intro and a plethora of online training resources here , then pop back to this post and continue reading.

What challenges does this address?

Different operating system platforms require different tools, standards and procedures, and in many cases, multiple teams of IT Pros. This requires more resources and can create silos within the IT department. DevOps aims to enhance business value by improving operations for people, proceses and technology by encouraging cross-platform collaboration and integration to simplify IT operations.

For teams with Windows administrators in a predominantly Windows environment, who manage a few Linux systems, or Linux administrators in largely Linux shops that must also administer some Windows machines; Both may now realize the benefit of leveraging a single set of tools and standards such as PowerShell and DSC.

1.    Efficiency: With this script, you can now quickly create a basic test environment infrastructure in as little as about 30 minutes, to begin explore the features of PowerShell and DSC on Linux.

2.    Cost: There is no capital investment required to set up storage, networking, compute, a home lab, or a physical facility since this is all done in Azure. An Azure subscription is required though, which you can try it free for 30 days here .

3.    Administration: The administrative requirements to create this environment is much lower than managing physical infrastructure directly, and the complexity of the setup is handled automatically in the code.

4.    Training & Skills Development: PowerShell and DSC on Linux is still a fairly new concept, but now you can review this post and use the script to reference how it works in detail, sort of like the "Infrastructure as Code" idea to develop these cross-platform skills. You may even decide later to contribute back to the PowerShell Core community to make things better and easier for all of us in the spirit of collaboration and continuous improvement.

As an IT Pro, knowledge of a widely accepted technology implemented across multiple platforms means you can also offer and demonstrate more valuable skills for your current or future employers, plus it's just more fun anyway!

What is the script overview?

We'll cover creating a small lab to support running PowerShell and DSC on Linux, and since this will be created in Microsoft Azure, there are no hardware requirements except the machine you will be running the script from. When you're finished, you can easily remove all the resources to reduce cost and rebuild again whenever you need to.

The script will deploy all the infrastructure components required, including network, storage, and the VMs themsleves. One of the cool features of this script is that you don't have to worry about downloading the additional files from GitHub, such as the DSC configuration script or the shell script for the Linux systems to install PowerShell core on each distro. The main script includes functions that will auto-magically download, stage and copy these files for you, in addition to any DSC resources from www.powershellgallery.com ! You have the option of creating between 1-3 Windows VMs, and exactly 3 Linux VMs. By default, 1 Windows 2016 Datacenter VM will be created, but you can use this command to specify a parameter value for more Windows VMs when you run the script.

The Windows VMs are really placeholders at this point, since the script will be enhanced to eventually integrate the Windows servers into PowerShell and DSC operations with the Linux VMs. For now, the focus will be on just configuring the Linux distros for Azure Automation DSC and to run PowerShell, though you can always be creative and continue experimenting with Windows/Linux PS and DSC integration youreself in the meantime, then give us your feedback so we can all make the experience even better!

The 3 Linux VMs deployed will have these distros:

The desired state is to simply create a new text file in the path of \tmp\dir\file with the content of file being ... hello word . No prizes for guessing that one, right? While this may seem simplistic, remember that you can continue to experiement with more sophisticated configurations and resources, so this is just to get started and introduce you to the basic concepts for now. Who knows, we may even update the script for more complex scenarios in the future. We can test this simple configuration after the deployment using the following commands:

We can also test running PowerShell in each of these builds. For convenience, I've included a few sample commands within comments at the end of the main script labled as:

What are the requirements?

Before diving in any further, let's cover what we'll need first.

During the script execution, you will be prompted for the following information:

To make it easier to visualize, here is the diagram of the solution. Just follow the index numbers and match them up with the sequence outlined on the right to get a general idea of the process. 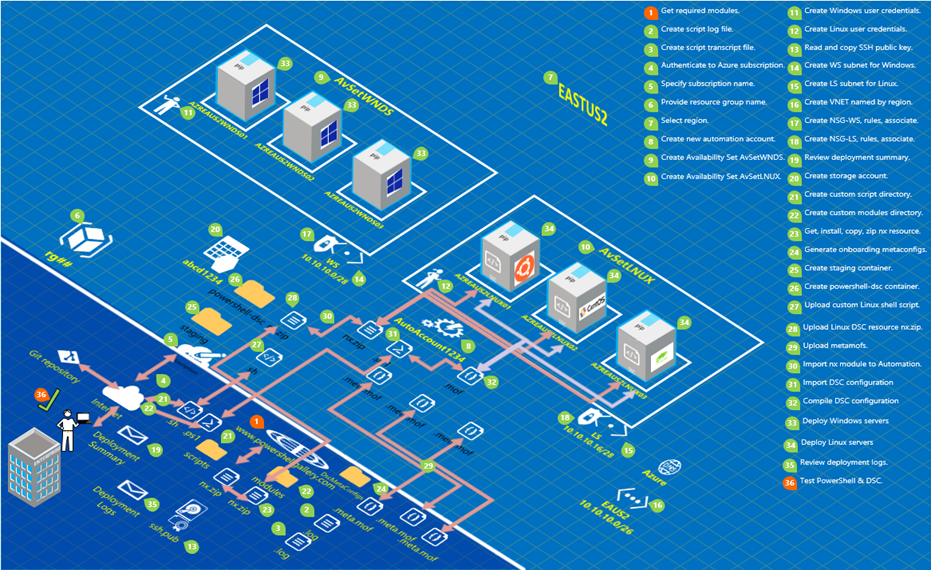 What are the details for each step?

In the following list, more details of each step outlined in the diagram is covered.

To test the results, follow the steps outlined here for each Linux VM. For brevity, only UbuntuServer LTS 16.04 distro will be shown in this example, but you should test all 3 distros to ensure that the results are consistent after-all.

You can review or download the script from GitHub here . I've included comments where I think it was necessary to make it readable. Remember that the only file you need to download and run is this one:

What did we just cover?

So we've outlined some key benefits of cross-platform tools like PowerShell and DSC for heterogeneous environments, provided a quick overview of the script, it's requirements, included a diagram, some details and the link for the script itself in GitHub. Feel free to sumbit any issues in GitHub for the script or contribute by forking the repository and making pull request.

That's it friends. Thanks for reading and hanging in there with me! Happy automating!

Where can I get more information?