Turn on suggestions
Auto-suggest helps you quickly narrow down your search results by suggesting possible matches as you type.
Showing results for
Show  only  | Search instead for
Did you mean:
Update Rollups For Windows Server 2012 and Windows 8 Explained
By

If you pay attention to the updates we rollout each month or take note of what Windows Updates are on your Windows 8 PC or Windows Server 2012 Server, you may have seen some monthly rollup updates. Below are the rollups from the first one when we released Windows 8 up to April 2013:

(Note that we recently renamed the updates from Cumulative Update to Update Rollup which we feel better describes them).

This post will discuss the intended purpose of these rollups, where they come from, and the intended audience. Note that the way we package updates may change as our products evolve so this information is relevant only to Windows 8 and Windows Server 2012.

So to start, these update rollups are not cumulative updates. You do need to apply each of the monthly update rollups to get the fixes and enhancements from each month. Installing the February 2013 Update Rollup does not get you the January 2013 to October 2012 rollup updates. This is to say, these rollups are independent of each other. Searching on the KB number (or just use the above links for existing updates) will discuss what each rollup is addressing that month. Note that these updates do not focus on a particular component as we have seen with previous cumulative or rollup type updates but are broader to Windows.

There are several mechanisms used to decide which fixes are put into these updates including feedback from Premier Customers, Original Equipment Manufacturers (OEM), Independent Hardware Vendors (IHV), Independent Software Vendors (ISV), telemetry from Windows Error Reporting ( WER ), forums, blogs and internal Microsoft organizations. Based on this data, we then make the decision on whether to include these fixes in the upcoming update on some of the below criteria:

· Impact to the end user. The impact needs to be rather significant. For example, does the problem being fixed result in a BugCheck, data loss, or other significant event.

· Applicability or number of systems impacted. This is where the telemetry data is important (turn on WER to make the products better). We also rely on estimate volumes from our OEMs, ISVs and IHVs.

· Confidence that the fix will not cause regressions. This confidence is based on our code analysis and extensive testing.

Note that the update rollups are not security-related and are intended to improve the overall performance and reliability of Windows. Security issues are still evaluated and deployed as discussed on the Microsoft Security Response Center site.

Most consumers will take these updates on a monthly basis without even realizing it and improve their overall experience. It is recommended that enterprises follow this same path and distribute these update rollups monthly, just as they do the Security updates from the second Tuesday of the month. It is expected that these updates can be distributed and tested using the same procedures that are used for the monthly Security updates so as to not significantly increase the burden on IT staff.

If you install updates by manually downloading updates from the Windows Update catalog or links from the related KB article, you also need to be aware that there may be prerequisite fixes that need to be installed first. This is handled automatically when using Windows Update , WSUS , Configuration Manager , etc. For example, if you go to the Microsoft Download Center and search on the March update rollup (paste in KB2811660 in the search field), you will see a several typical links for the different architecture types. Selecting any of these (note that Windows 8 x64 and Windows Server 2012 are the same) will display the chained updates. We use the word chained here because if were to install parent KB2811660 from Windows Update, it will install all of the other child updates automatically. So again, the typical home user will not only get KB2811660 installed but also KB2800088, KB2812829, KB2815769, and KB2823233 automatically. Users who do not use Windows Update will need to manually install all of the updates from the download center when searching on the parent update rollup– so for the March update, a total of five updates. Home users who use Microsoft Update and As mentioned, customers who utilize WSUS and System Center Configuration Manager with its approval process do not need worry about the parent / child relationships as they take care of that for you.

Here is an example of the March update rollup and how it appears on the Microsoft Download Center: 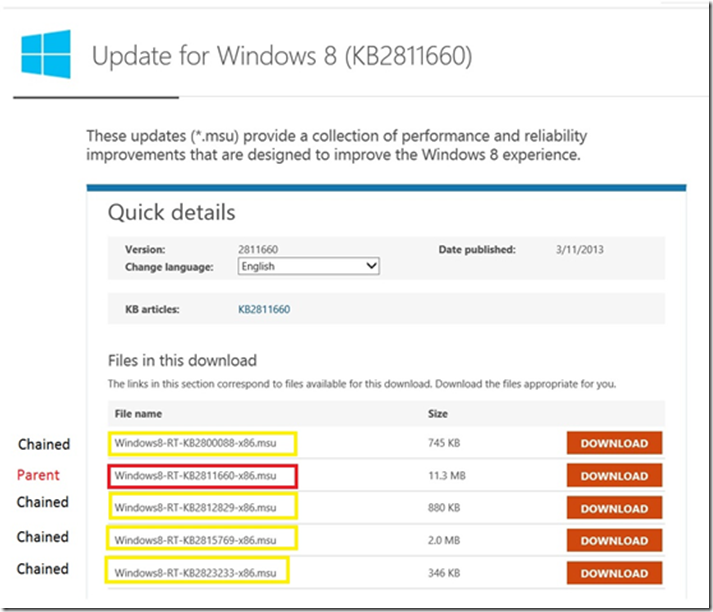 The end goal of these update rollups is for home and enterprise users to maintain a solid and well tested baseline of the overall Operating System (OS). Update Rollups are a way for us to accommodate the way our customers are using the product today. These update rollups allow customers to maintain an up-to-date system simpler and in a more speedy fashion than ever before.