Turn on suggestions
Auto-suggest helps you quickly narrow down your search results by suggesting possible matches as you type.
Showing results for
Show  only  | Search instead for
Did you mean:
Understanding Workflows
By

Workflows within the FIM Portal are used in combination with Sync rules to build, manage, control, or manipulate data that. Prior to the FIM Portal any manipulation of data from one data source to be managed to or from another data source need Custom Rules Extensions that required an understanding of Visual Basics or C#, which often required onsite developers or 3rd party consultants that are often expensive and hard to come by. One of the many issues with having to use Rules Extensions to manage data was scalability, maintenance or troubleshooting. After the rules extensions are in place if a need arises where a change needs to be implemented it would once again require onsite developers or at that point someone with a basic knowledge of VB and or C# to understand the existing Rules Extension in order to make the necessary changes. The worst possible scenario is where a change is needed in the Rules Extension and the source code is nowhere to be found for one reason or another.  Workflows are used to perform a variety of different task which include but certainly not limited Notification when a specific action has taken place, Authorization when someone would like to make a change to a specific attribute, or actions such as completing a function on behalf of the user when a specific action has taken place. A combination of all these different task can be performed for any desired circumstance. In the end Workflows are put in place for automation of your environment as well as streamlining your organization’s processes. More importantly these workflows can be used to follow a specific standard such as naming conventions and applying appropriate permissions.

Often when these steps are performed manually they are done incorrectly and not necessarily by incompetence but by common mistakes like Typos, or forgetfulness. Workflows by them-selves do nothing but when they are associated with an MPR (Management Policy Rule) they can be used to perform functions as mentioned previously. These same workflows can be associated with multiple MPR’s but it is important to understand what the workflows are doing and when they should be “Triggered” or “Applied”. If not properly planned and tested you could find yourself in a looping scenario where a workflow gets applied again and again because the action that the workflow performs is associated with a “trigger” that applies the workflow. For example if you have a workflow that builds a display name but the MPR that “triggers” the workflow is for multiple attribute such as Create and Modify First Name, Last Name, or Display Name than the very action being performed would build or modify the objects Display Name, which would cause the workflow to be triggered a second time where even if the 2nd result would build the same Display Name and there may not be a change its still wasted resources on your machine, and additional unnecessary SQL “Churn”. Other situations could exist where the workflow gets in an endless loop which would eventually slow your environment to a crawl. Bottom line is to be sure and test any and all workflows before they are put in production.

When you first install the Forefront Identity Manager Portal you are given 3 Types to choose Each Workflow type having additional functions associated with that particular activity. Additionally there is a select Run On Policy Update which is used in conjunction with Transition Set MPR’s 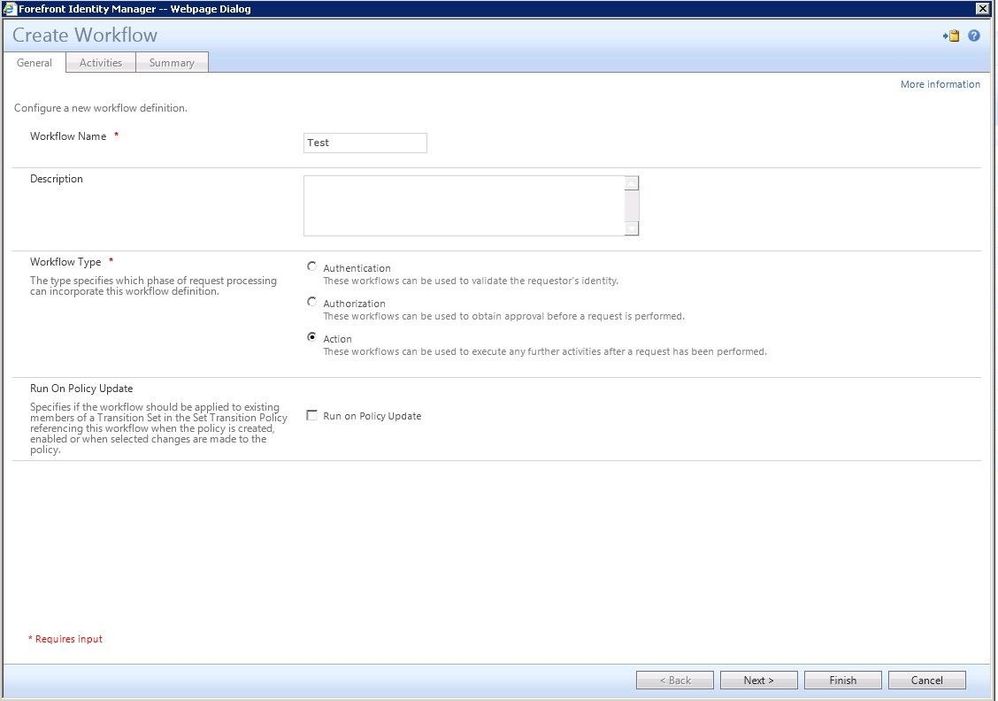 Working with the Default Workflow library

Functions are a built-in method used to define the type of modification you need the synchronization engine to apply when generating an attribute value for an object.

In FIM, you can group the existing functions into the following categories:

Logic functions are used to perform an operation based on conditions evaluated by the system.

Now that you are at least a bit more familiar with working with the Default Workflows within the FIM Portal, you may wish to begin understanding Advanced Work Flows which utilize Custom Workflow Activities built with the .NET Framework.