Turn on suggestions
Auto-suggest helps you quickly narrow down your search results by suggesting possible matches as you type.
Showing results for
Show  only  | Search instead for
Did you mean:
Unable to import WIM into SCCM console
By

Ran across an interesting issue today.  When trying to import an OSD WIM image into the ConfigMgr console we received an error that ‘the specified path does not contain a valid WIM file’.  Generally, this error can be linked to a corrupt install of the WAIK or spaces in the UNC path.  Thats what we thought so we uninstalled the WAIK only to find that we couldn’t reinstall it.  When trying to reinstall we received an error stating “The installer encountered an unexpected error installing the package.  This may indicated a problem with the package.  The error code is 2908”.  We tested further and found this error to be generated with most any MSI we would try to install.  Only the most basic MSI installed without issue.

Ultimately, we traced the issue down to the fact that the core registry keys Windows Installer writes to/adjusts when performing an install were locked. When we attempted to access the components key for the SID representing the local system, we received an access denied.  In fact, before we cleared the permissions problem on the components key (which we did by taking ownership of it again), we couldn’t see any of the subkeys.  Even after resolving permissions on the components key itself, the child keys remained locked and nothing we did in regedit resolved the problem. 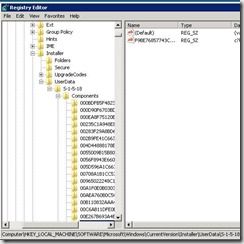 Finally, we used the SUBINACLS utility to reset permissions and access was restored.  The command line we used is below.

With the registry access restored, we were able to install the WAIK and were able then to import WIM’s without problem.