If you’re not familiar with Storage Tiers, the idea is to be able to mix Solid State Disk (SSD) storage with conventional disks (HDD).  However, Storage Tiers provides the ability to store more frequently accessed data on SSD media...with both types of media used as block based storage for the same virtual disk: the best of both types of storage.   That’s a pretty high level summary…and a pretty awesome concept.  Previously, in my basement lab I had two different pools:  one for each type of storage.

If implementing tiers using PowerShell, some calculations may be required…and it looks a bit complicated if you’re just attempting to try out.   Granted, below are quite a few screen shots and this is a lengthy post.  However, the process using the UI is fairly easy.   I made one diversion into PowerShell to show how to define MediaTypes for storage devices if they’re not detected automatically.  The technique I use for that is very similar to Jose’s example but is another variation to show that you’re not limited to just one technique.

If you’ve read my recent post about expanding a storage pool , you may have a better understanding of how Storage Spaces uses columns .  Using the UI to configure Storage Tiers will attempt to use the defaults for the number of columns.  Using some quick and easy PowerShell during the creation process, you may change the column defaults for a specific storage pool.

Remember: If you have difficulty reading any of the screenshots below, you can obtain a full size image by clicking on them.

1. The first step involves attaching the devices you intend to use.  You must have at least one SSD and one physical drive attached.   For this example, I chose 4 SSD devices, and 9 1 TB drives.   This is indeed an odd arrangement but I’ve chosen it with a purpose: to show the layout of a defined virtual disk, and to show that Storage Spaces will use what it can from this arrangement and leave remaining space for other uses.   In this example, I’ve connected the devices and can see them within Server Manager. 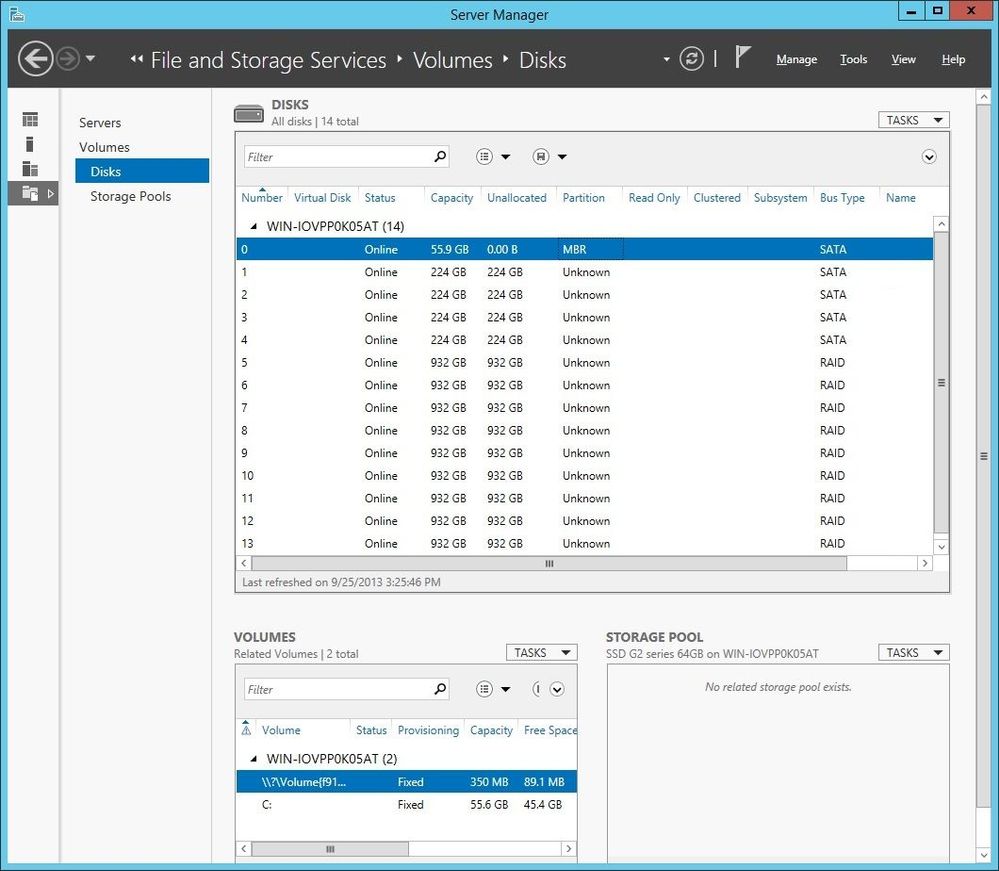 2. Next, drop into Storage Pools within Server Manager to see the Primordial pool of available disks. 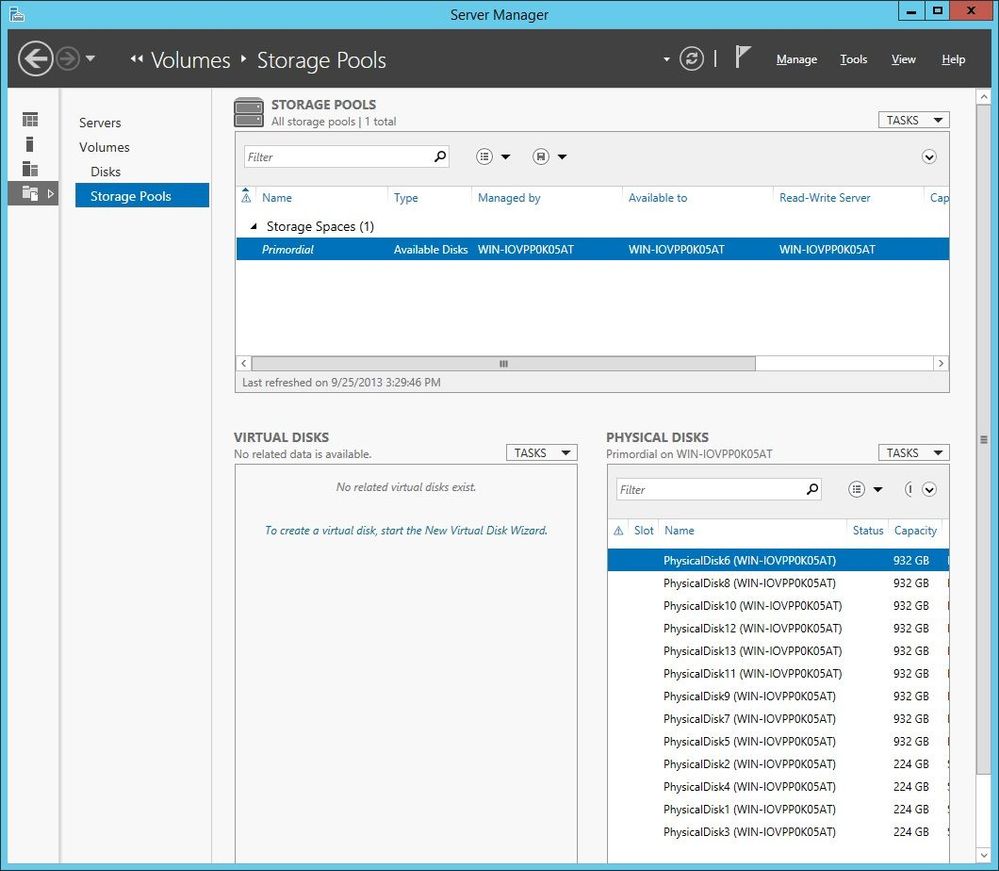 3. Right-click the Primordial pool, and create a new pool. 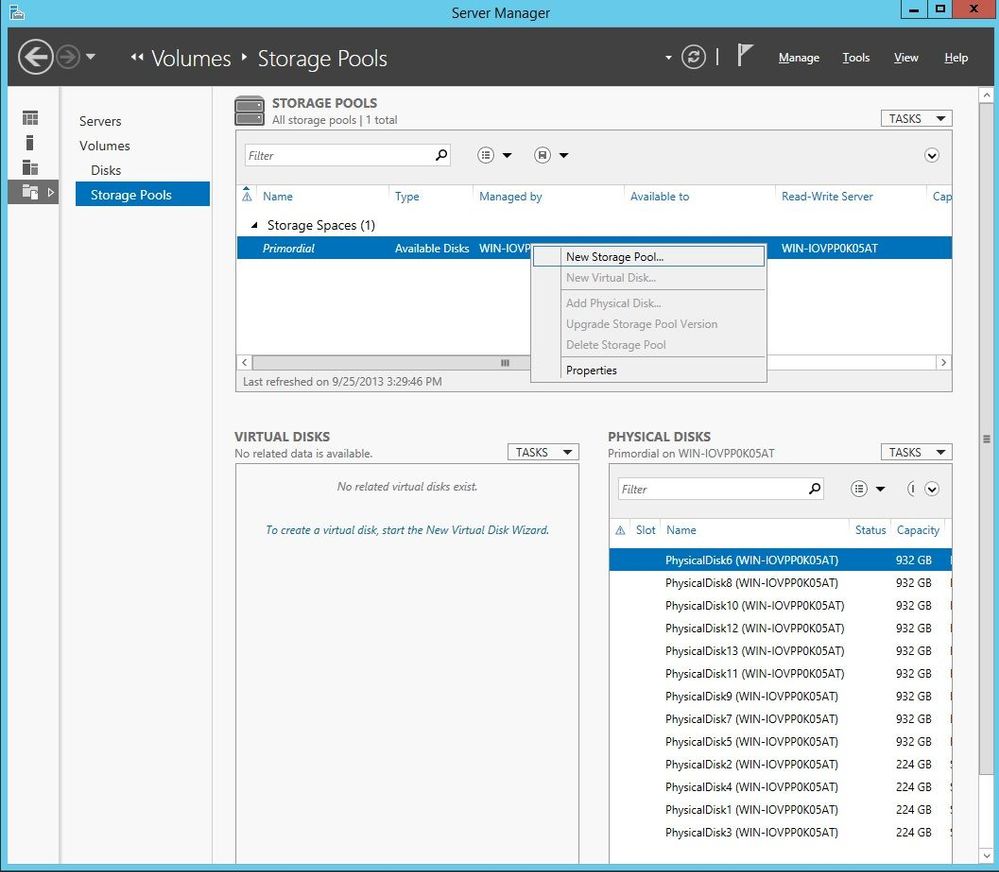 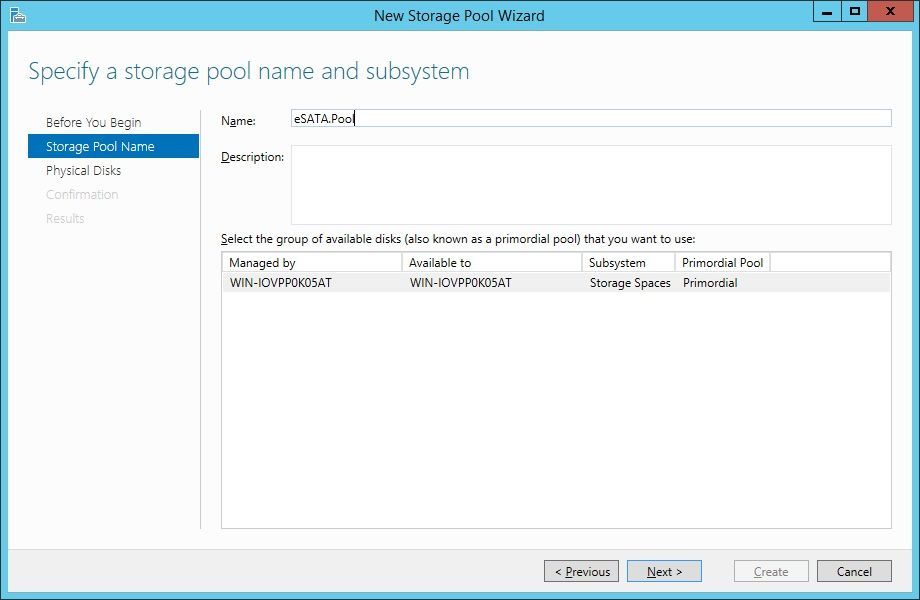 5. In my example, I’m choosing 2 of the disks to be hot spares.   The only reason I chose the specific devices below is because they’re the top drives in each external eSATA cabinet and are easy for me to keep track of this way.  ;)  In this section of the wizard, you will also choose the devices to include in the pool.  You may click the checkbox on the line with column labels to select all available devices should you so choose. 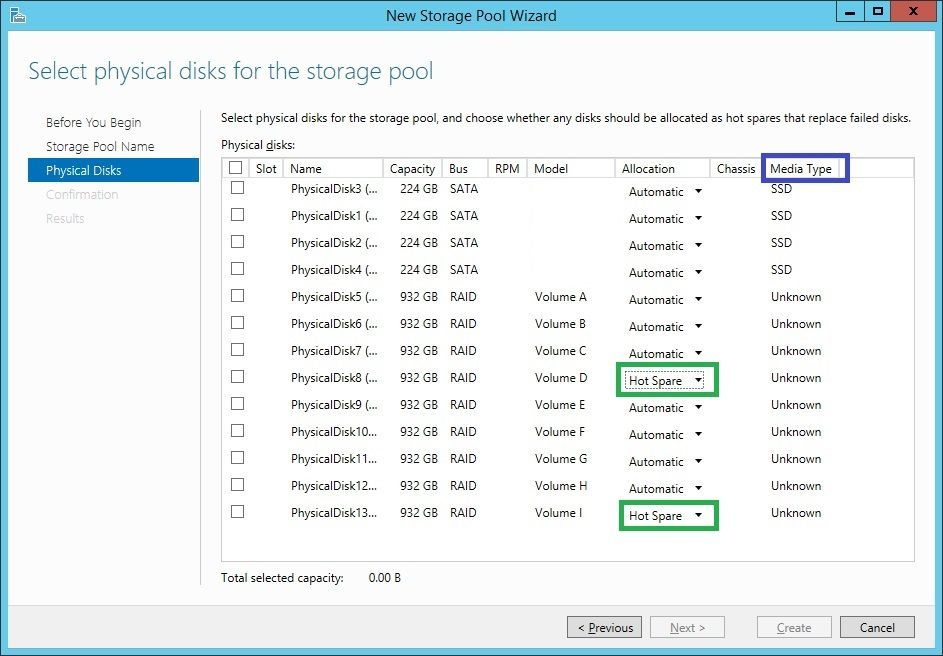 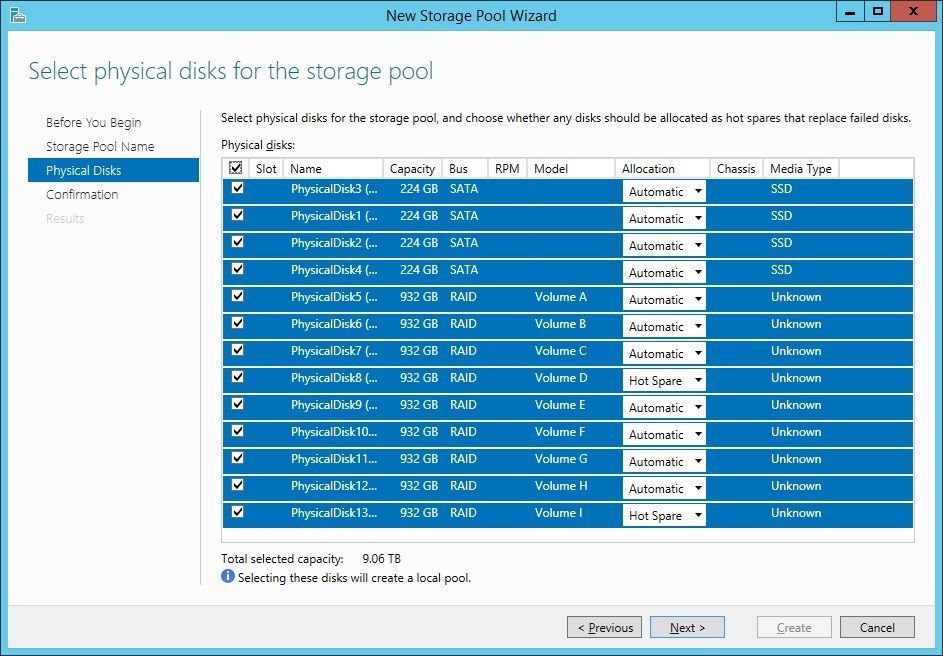 Notice that the SSD devices were detected as SSD media.  However, in this case the physical drives show as unknown.   If yours are not detected like in this example, they should be set correctly which can be done using PowerShell.  We will proceed for now but will need to correct this later.  Leaving the majority of the devices as Unknown will result in error in a later step.  Next, confirm choices and proceed. 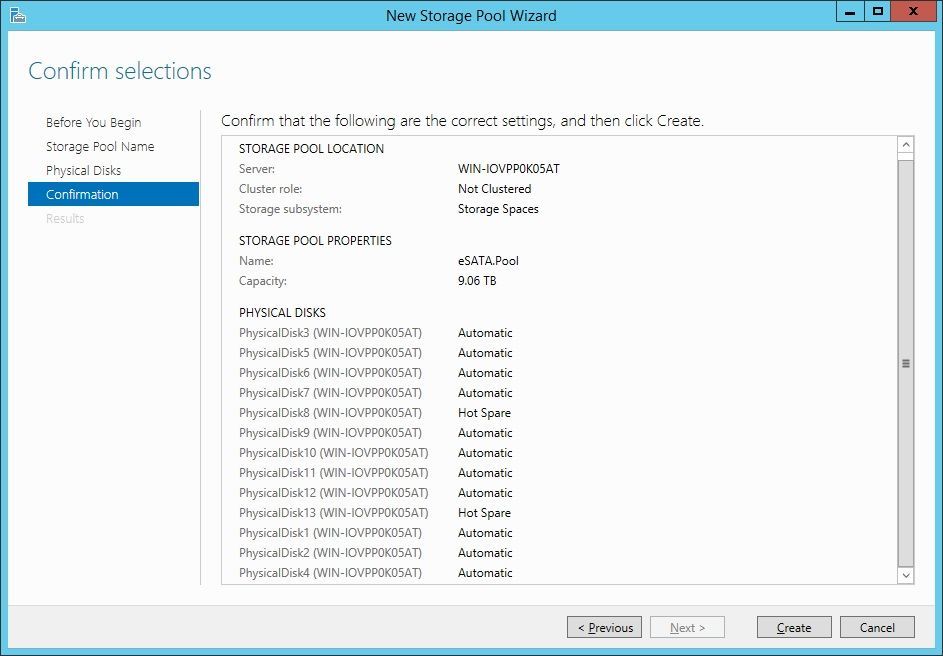 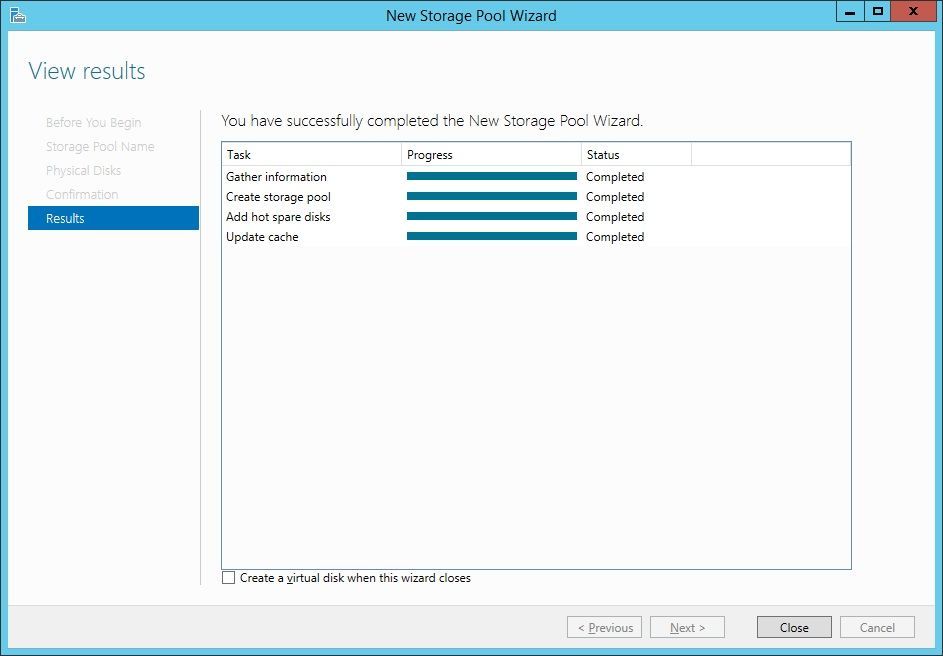 6. If you proceed forward from here and attempt to create a virtual disk, you may receive the following status message.  Also note that the new option to create tiered storage is grayed out.  This is because the devices in the pool currently don’t meet the minimum requirements due to the Unknown MediaType of my physical disk storage. 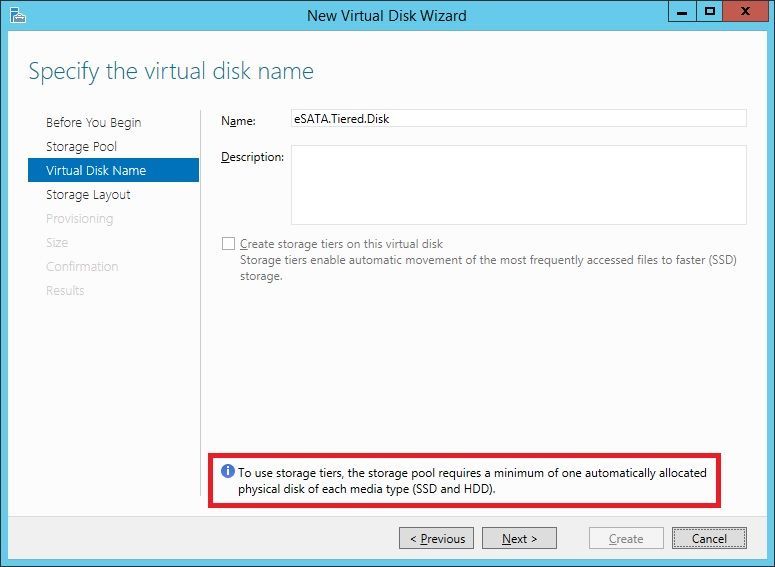 Figure 9: Can’t proceed if storage type needs to be defined

7. The above problem is an easy fix.  If your storage was properly detected as HDD, then you can skip this step.  Otherwise, open a PowerShell prompt and use commands like in the example below: 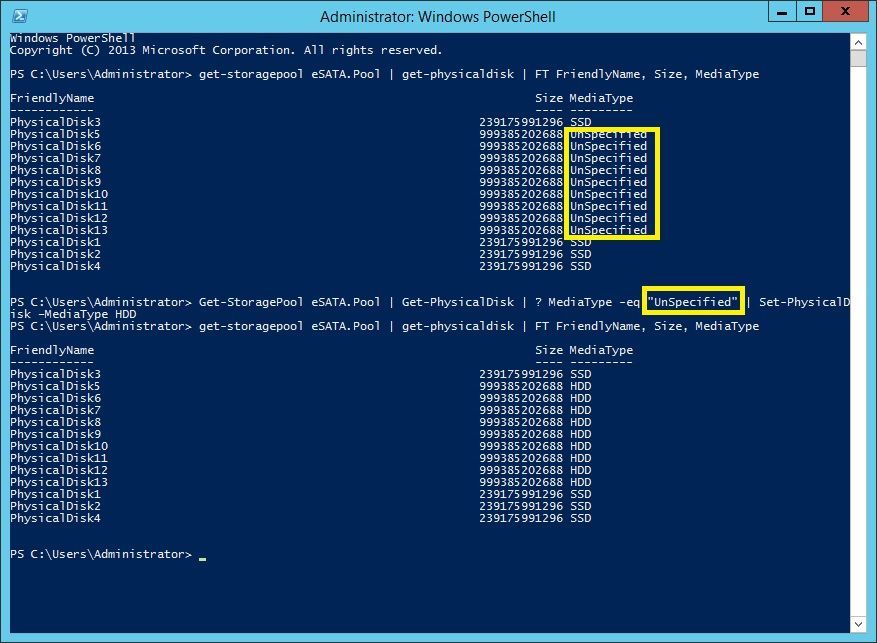 8. This is also a good time to override the defaults on number of columns to be used within this particular storage pool.  By default, as you’ll note from the first command below, the pool is defined to use automatic selection.  I am planning to use a mirroring on the virtual disk to be created and want to use two columns.   If I were going to create a simple volume, I would want 4 columns as I have 4 SSD drives.   You may also be thinking that I’m crazy for mirroring SSD drives.  SSD drives are not exempt from failure.

9. Getting back to the UI…now is a good time to refresh Server Manager.  The UI needs to be refreshed to be aware of the changes just made or subsequent steps may yield errors.

10. Next, we will create the virtual disk.  You don’t have to create the tiers first in PowerShell because the UI will do this for you by using the available checkbox to enable tiering. 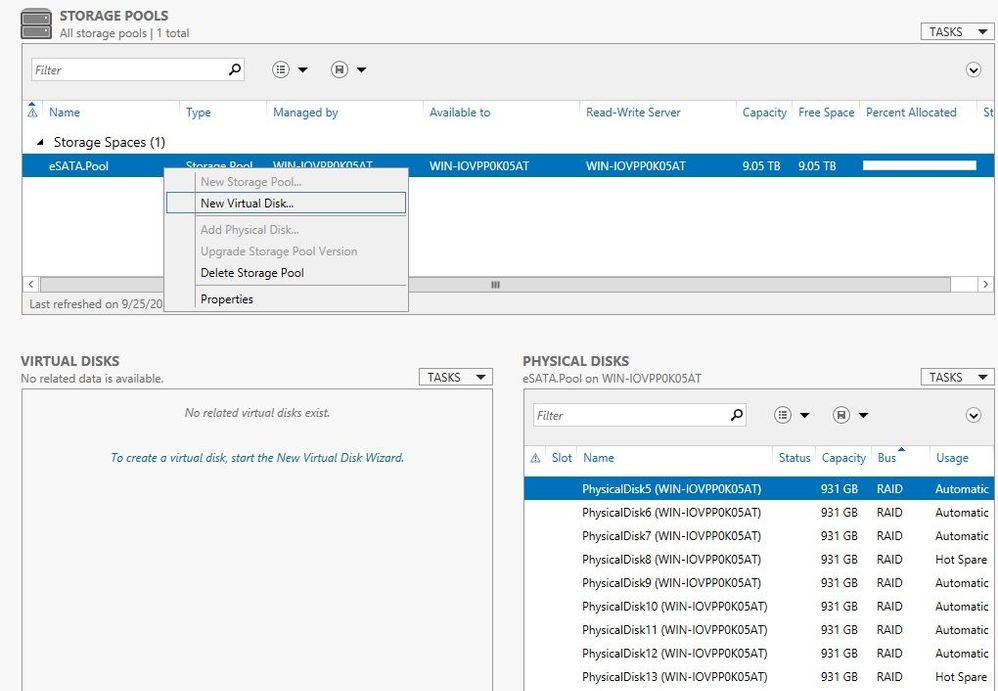 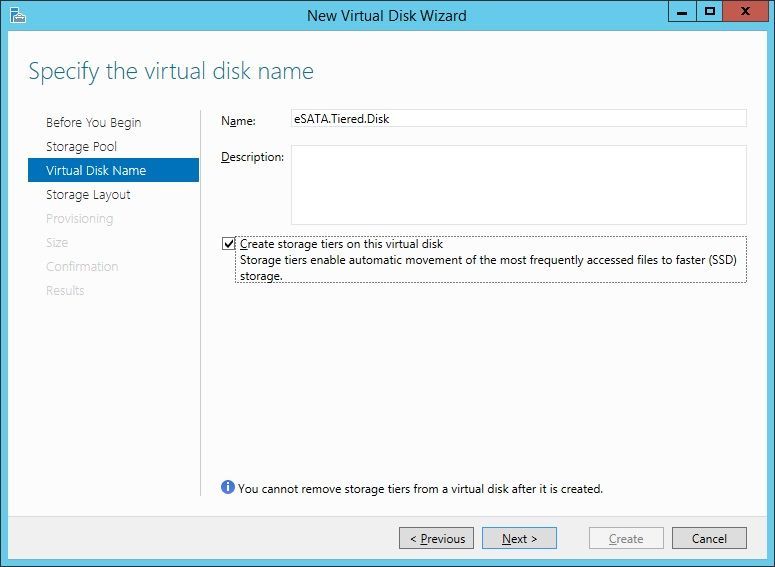 Figure 14: Use the checkbox to enable Storage Tiers

11. Select the layout for the storage.  In my example, I want to use mirroring. 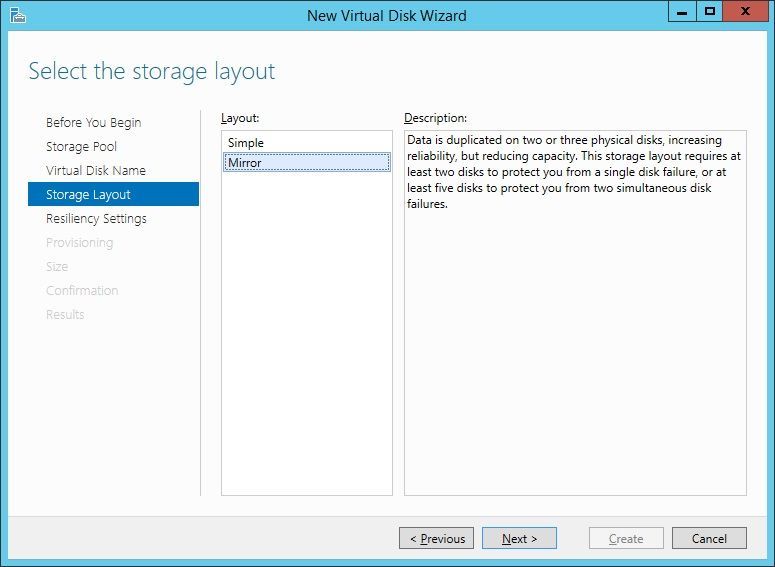 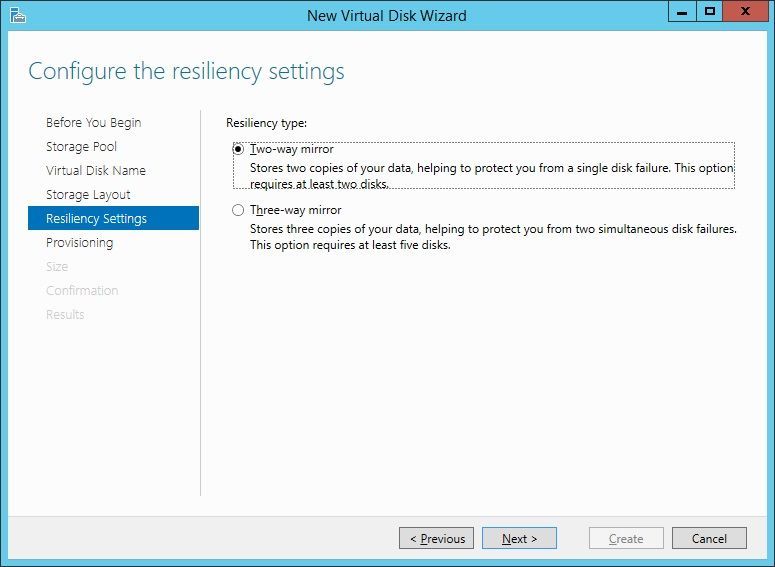 13. When using tiers, you must use fixed provisioning. 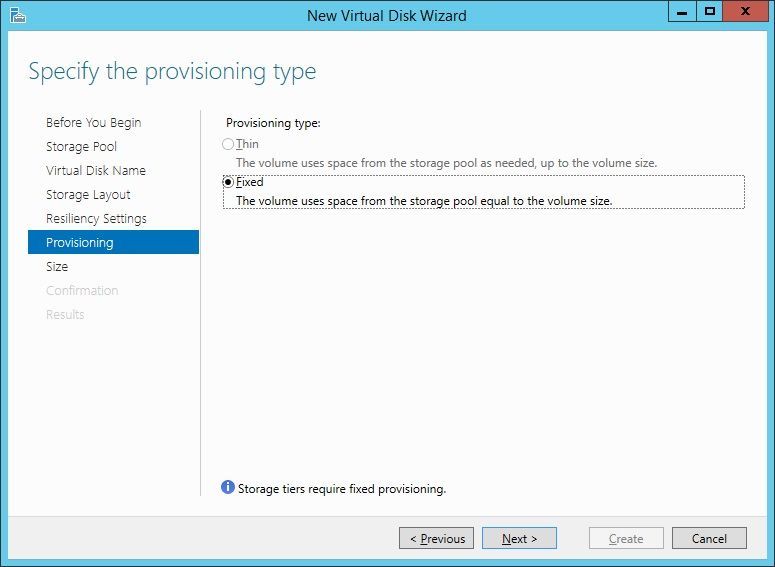 14. Here you get to view the size of the tiers for the virtual disk.   Both tiers will be put together to make the resulting virtual disk.  In this example, I’m going with the maximum for each. 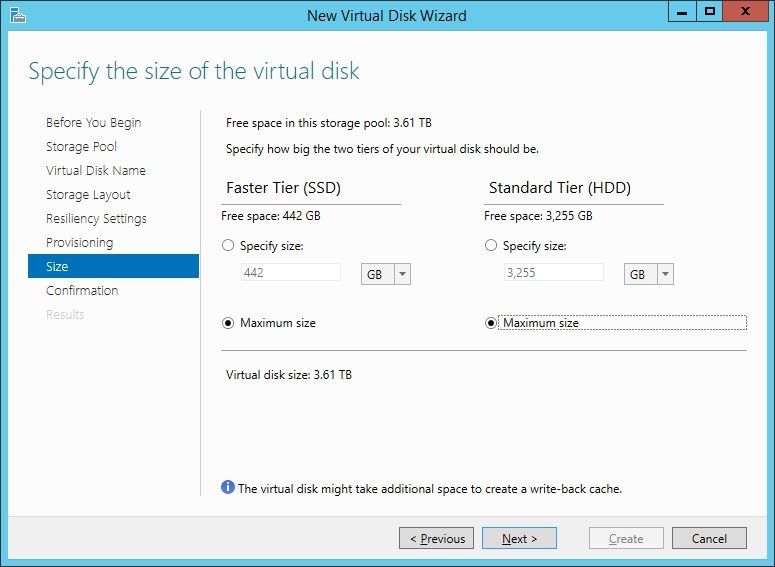 15. Reviewing the selections below, you see that out of 9TB of available data, the resulting virtual disk is only 3.6TB.  Remember that we used all the available SSD space (which was smaller than available HDD space to begin with), and that by choosing mirroring that we’re really using 7.2TB for a 3.6TB volume.   Any space not used will remain available in the pool.  The maximum size of 3.6TB for this virtual disk is due to the overall disk layout. 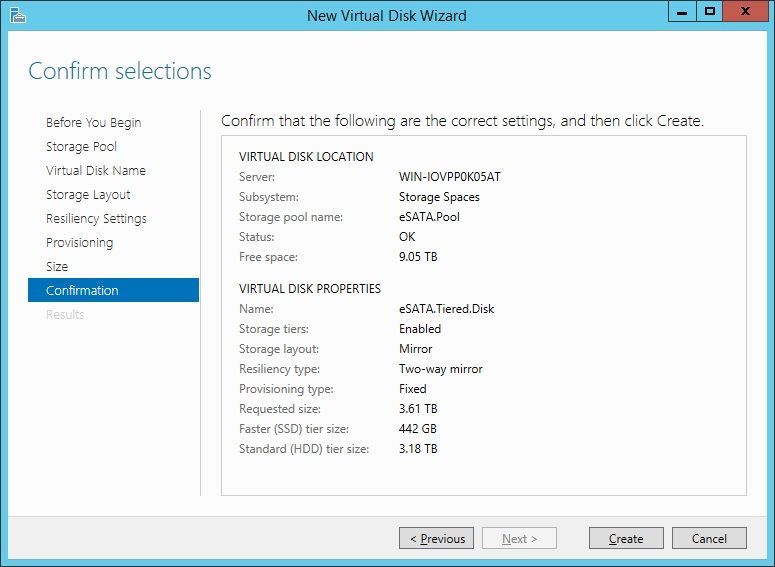 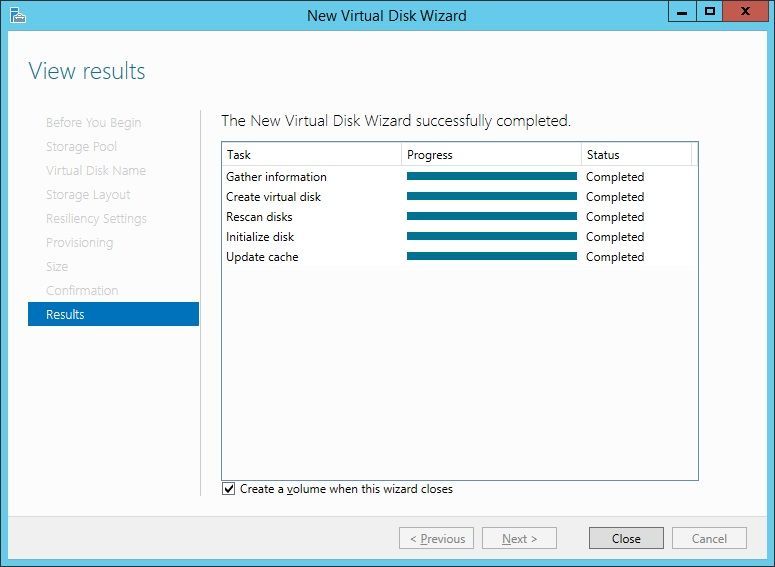 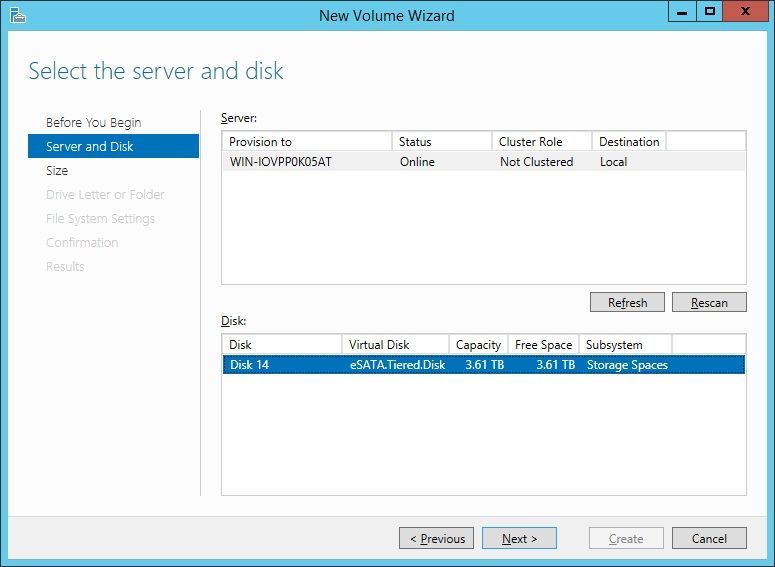 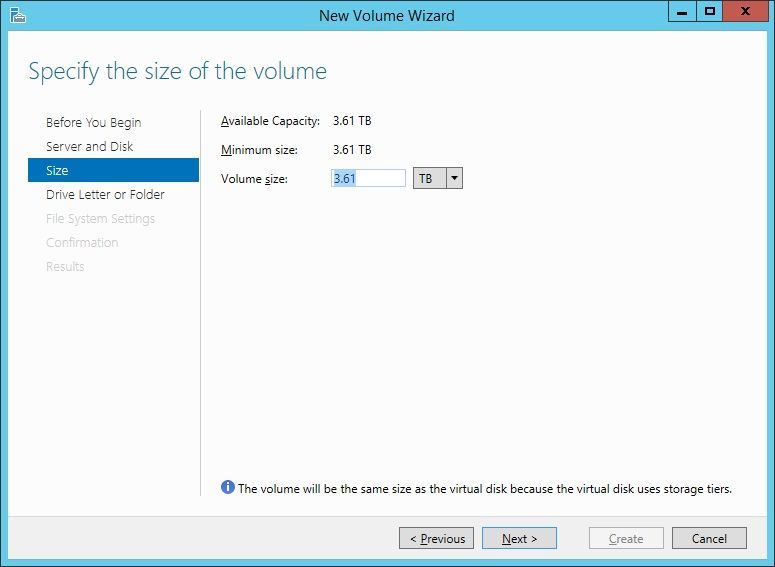 17. Assign a drive letter for the volume. 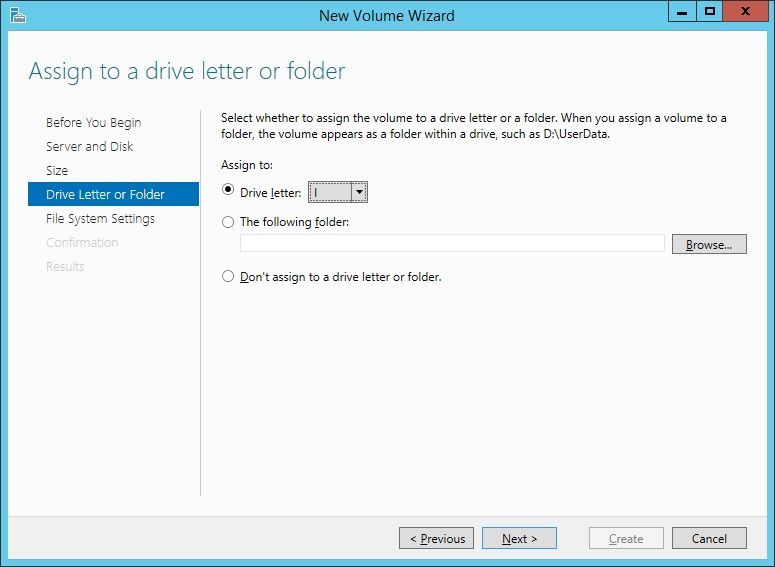 18. Specify a volume label if you choose. 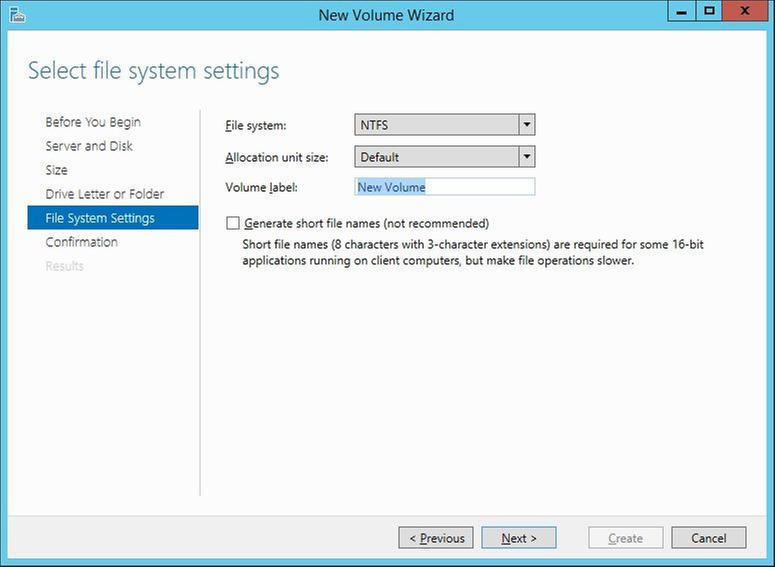 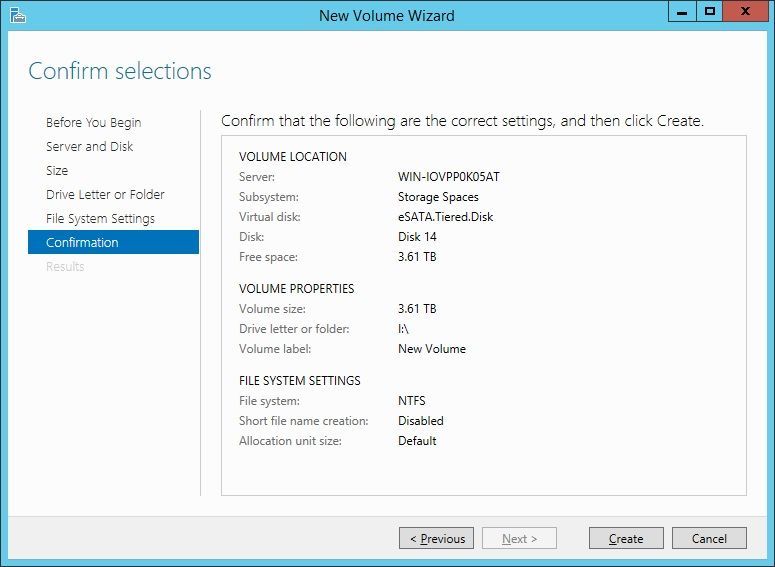 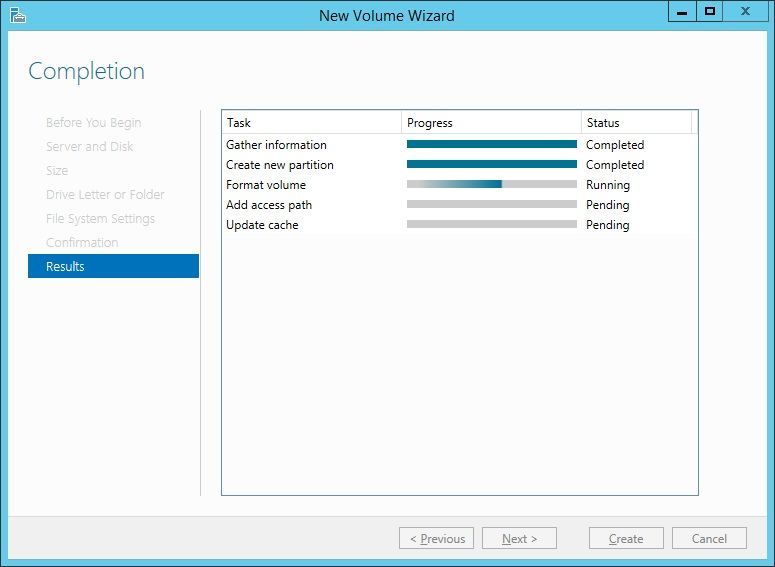 Figure 26: Last step may take a while to complete

20. Once everything has completed, if you look at the storage pool again, you will see that space remains available in the pool -- even though we chose the maximum size for the virtual disk and volume.  This is due to the storage configuration I chose for this example.  Based on the configuration options I chose for the virtual disk, Storage Spaces chose the largest virtual disk it could create based on the available disk layout and columns needed.  Therefore, essentially the space on two remaining 1TB drives remains for whatever I might want to use it for. 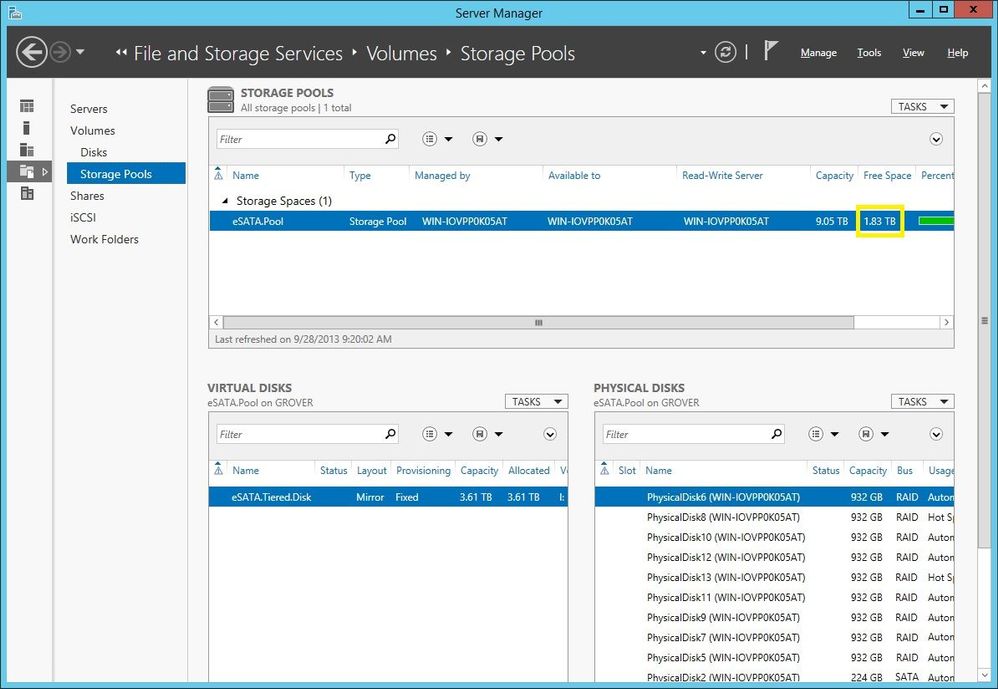 21. After the wizard completes, the volume may be used for data.  You may or may not know that there are scheduled tasks associated with Storage Tiers.  Initially they are not enabled, but after establishing the first tiered storage, they will be enabled automatically.  After successful completion, those tasks should appear enabled as follows. 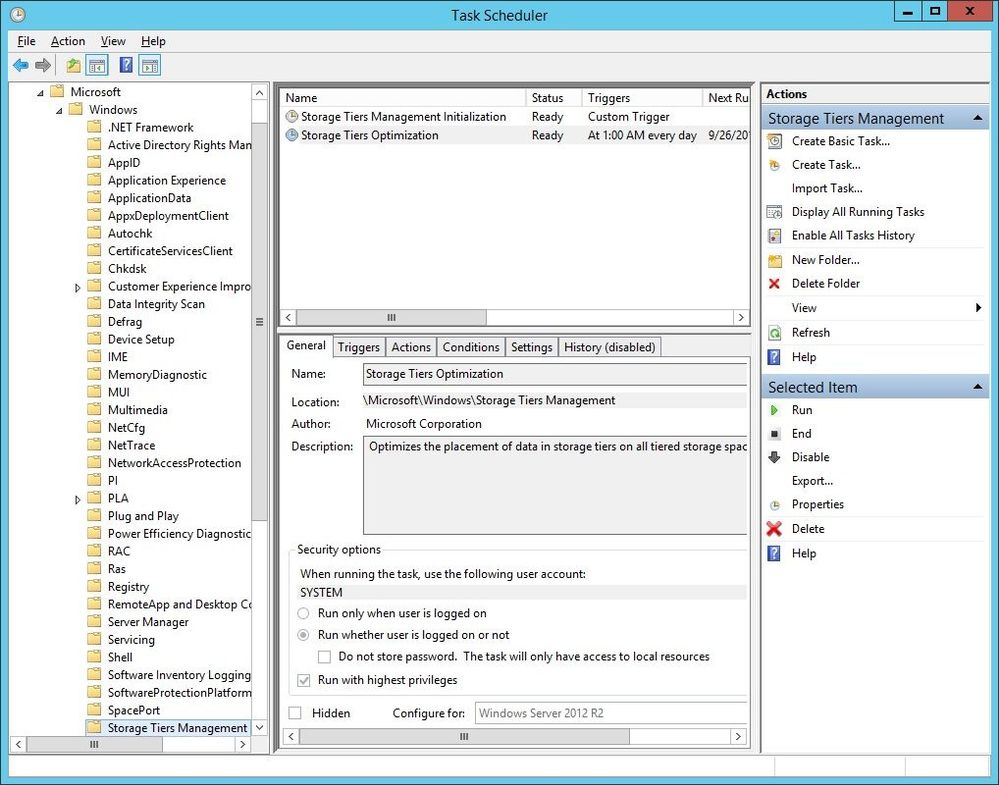 I hope this helps to illustrate how to create tiered storage with Storage Spaces using Windows Server 2012 R2.  Having the option to use different classes of storage within the same virtual disk is a great feature to have as an option for your storage needs.

For More Information about Storage Spaces:

Prior Posts about Storage Spaces