One of the most exciting aspects of SQL Server 2019 are the enhanced capabilities around the PolyBase feature that enables access to non-SQL Server external data sources through a process referred to as virtualization.  The data remains at the external data source but can be queried from with SQL Server using native Transact-SQL just as if the data were stored locally.

As the PolyBase feature is implemented into mission-critical environments, organizations will seek high-availability solutions to ensure continuous operation of externalized data sources.

The abridged version of this article is that the PolyBase feature is compatible with Always On Failover Cluster Instances, but is incompatible (and therefore unsupported) with Always On Availability Groups.  If that statement provides the needed information, then you can probably stop reading.

If you are curious as to why this is the case, the remainder of this article details why the PolyBase features works with one high availability deployment topology but not the other.

First, a brief review of the PolyBase services is important as their behavior is influenced by the chosen high-availability design.

A Failover Cluster Instance of SQL Server uses a network name that moves between the WSFC nodes to provide high availability.

For this section of the article, the PolyBase scale-out topology is as follows:

The view from Failover Cluster Manager. 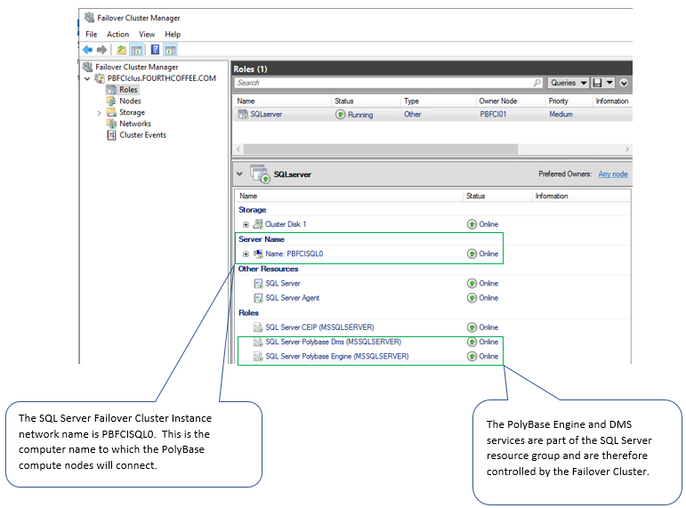 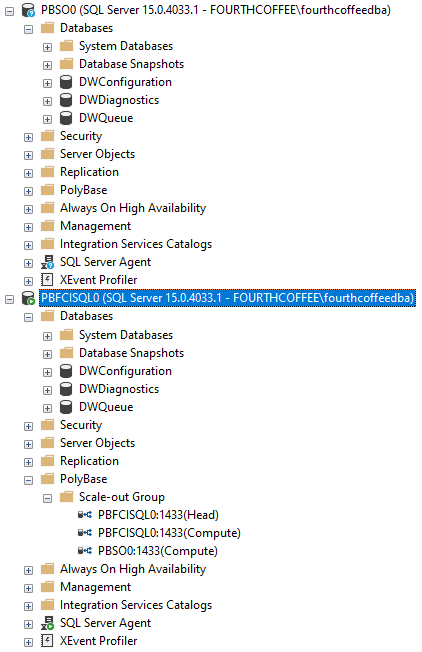 In a PolyBase scale out topology, compute nodes open a persistent connection to the host serving as the head node.

With the environment shown above, compute node “PBSO0” creates a persistent connection to “PBFCISQL0”, which is the Failover Cluster Instance (FCI) acting as the PolyBase head node.

When Failover Cluster resource group “SQLserver” and its associated resources (which include the PolyBase Engine and DMS services) moves from one node to another, the persistent connections from compute node “PBSO0” to head node “PBFCISQL0” are terminated as the SQL Server instance is taken offline.

The “PBFCISQL0” FCI SQL Network Name is currently hosted on the cluster node PBFCI00 and as shown below there are numerous connections from the PolyBase scale-out compute node “PBSO0”. 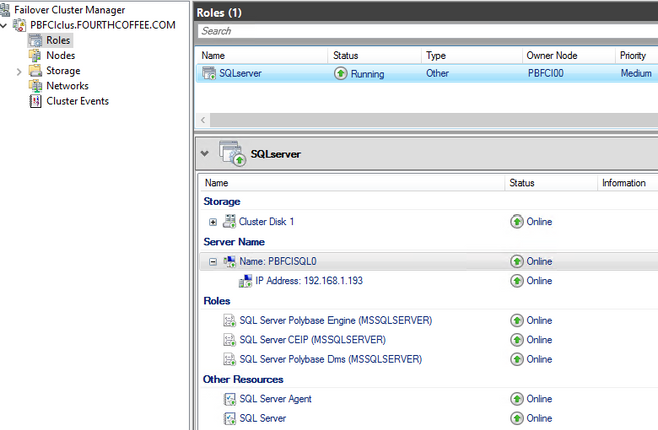 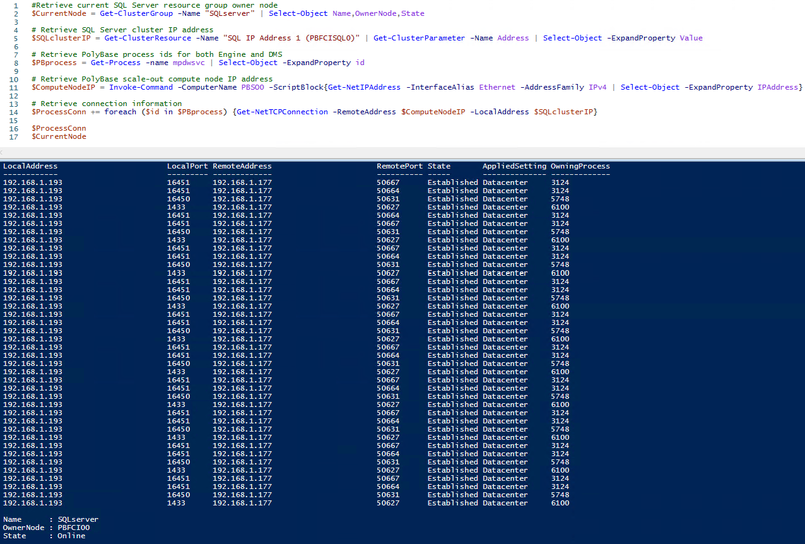 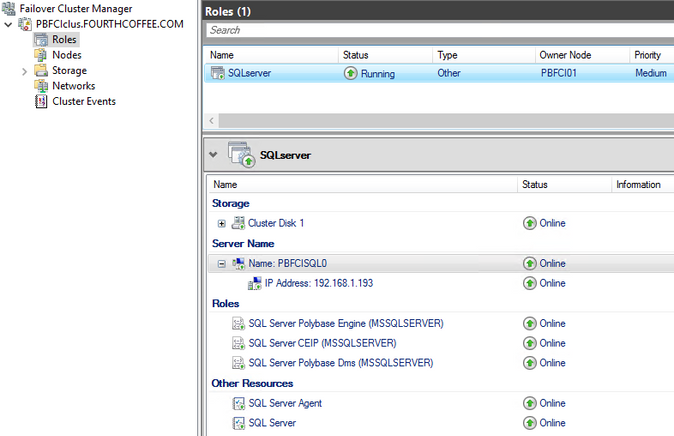 Now that all the resources in the SQL Server Resource Group are back online, now on the “PBFCI01” cluster node, let us review the logs on the “PBSO0” PolyBase scale-out compute node. 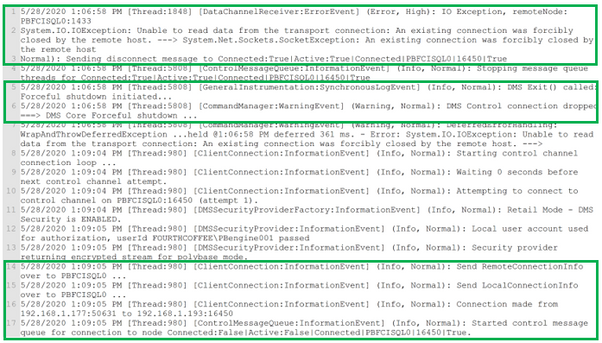 In fact, the PolyBase DMS service on the “PBSO0” scale-out compute node terminates completely, as is evidenced in lines 5 and 6 above as well as in the System Event Log as shown below. 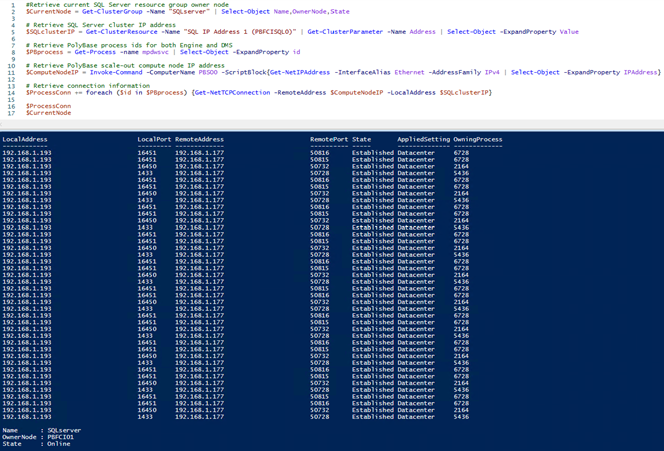 At the time of this blog’s authoring, high availability for the PolyBase head node using Always On Availability Groups is not a supported configuration.  And here’s why.

For this section of the blog post, the PolyBase scale-out topology is as follows:

When the “ExternalAG” availability group transitions from one replica to another, such as from PBAO1 to PBAO2, the PolyBase Services (Engine and Data Movement Service) are not automatically stopped and/or restarted on either of the Always On Availability Group replica servers.  As a result, the PolyBase scale-out compute node in our topology, PBSO001, is unaware that the availability group has moved from one replica to another. 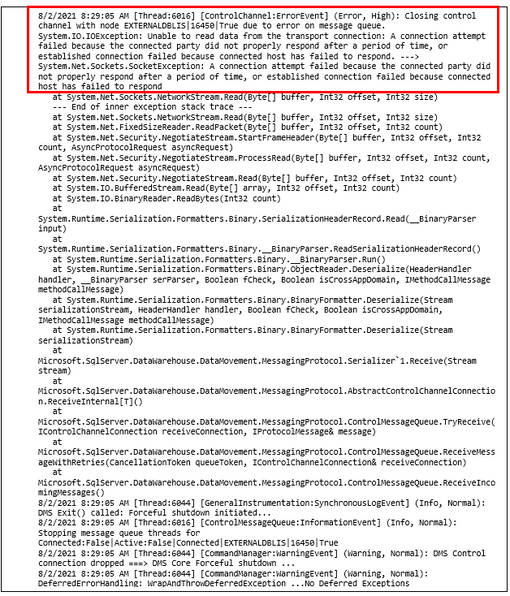 Hopefully this article made clear the interaction between the PolyBase feature and common SQL Server high availability solutions.  To summarize, if high availability for PolyBase is a requirement for your environment, the only viable deployment topology at this time are Always On Failover Cluster Instances.