Hello all. Jacob Lavender here again for the Ask PFE Platforms team to share with you a little sample tool that I've put together to help with performing network captures. This all started when I was attempting to develop an effective method to perform network traces within an air gapped network. My solution had to allow me to use all native functionality of Windows without access to any network capture tools such as Message Analyzer, NETMON, or Wireshark. In addition, I'd need to be able collect the trace files into a single location and move them to another network for analysis. Well, I know the commands. The challenge is building a solution that junior admins can use easily. Several weeks later I found the need for it again with another customer supporting Office 365. This process resulted in the tool discussed in this post. Time and time again, it seems that we've spent a great deal of effort on the subject of network captures. Why? Because one of the first questions a PFE is going to ask you when you troubleshoot an issue is whether you have network captures. Same is true when you go through support via other channels. We always want them, seem to never get enough of them, and often they are not fun to get, especially when dealing with multiple end points. So, let's briefly outline what we're going to cover in this discussion: Topic #1: How to get the tool. Topic #2: Purpose of the tool. Topic #3: Requirements of the tool. Topic #4: How to use the tool. Topic #5: Limitations of the tool. Topic #6: How can I customize the tool? Topic #7: References and recommendations for additional reading. Compatible Operating Systems:

Topic #1: Where can I get this tool? https://gallery.technet.microsoft.com/Remote-Network-Capture-8fa747ba Topic #2: What is the purpose of this tool as opposed to other tools available? This certainly should be the first question. This tool is focused toward delivering an easy to understand approach to obtaining network captures on remote machines utilizing PowerShell and PowerShell Remoting. I often encounter scenarios where utilizing an application such as Message Analyzer, NETMON, or Wireshark to conduct network captures is not an option. Much of the time this is due to security restrictions which make it very difficult to get approval to utilize these tools on the network. Alternatively, it could be due to the fact that the issue is with an end user workstation who might be located thousands of miles from you and loading a network capture utility on that end point makes ZERO sense, much less trying to walk an end user through using it. Now before we go too much further, both Message Analyzer and Wireshark can help on these fronts. So if those are available to you, I'd recommend you look into them, but of course only after you've read my entire post. Due to this, it is ideal to have an effective method to execute the built-in utilities of Windows. Therein lies NetEventSession and NETSH TRACE. Both of these have been well documented. I'll point out some items within Topic #7. The specific target gaps this tool is focused toward:

With that said, this tool is not meant to replace functionality which is found in any established tool. Rather it is intended to provide support in scenarios where those tools are not available to the administrator. Topic #3: What are the requirements to utilize this tool?

Note: Technically, we don't have to have Message Analyzer or any other tool to search within the ETL file and find data. However, to do so, you must have an advanced understanding of what you're looking for. Take a better look at Ed Wilson's great post from the Hey, Scripting Guy! Blog : https://blogs.technet.microsoft.com/heyscriptingguy/2015/10/14/packet-sniffing-with-powershell-look... Topic #4: How do I use this tool? Fortunately, this is not too difficult. First, ensure that the requirements to execute this tool have been met. Once you have the tool placed on the machine you plan to execute from ( not the target computer ), execute the PS1 file. PFE Pro Tip: I prefer to load the file with Windows PowerShell ISE (or your preferred scripting environment). Note: You do not have to run the tool as an administrator. Rather, the credentials supplied when you execute the tool must be an administrator on the target computer. Additional Note: The tool is built utilizing functions as opposed to a long script. This was intentional as to allow the samples within the tool to be transported to other scripts for further use – just easier for me. While I present the use of the tool, I'll also discuss the underlying functions. Now, that I have the tool loaded with ISE, let's see what it looks like.

Note: The file share must be accessible from both the local client and the target computers. Here is why:

Note: As stated by the tool, capture files can take up a great deal of space. However, the defaults within the tool are not very large.

You can customize the values of the network captures. The commands are located within the Start-NETSH and Start-Event functions.

For the purpose of this tool, I utilized the defaults with NO customization.

Now, you might be asking why are we mounting a drive letter instead of using the Copy-Item command to the network path. Yeah, I tried that without thinking about it and got a big giant ACCESS DENIED . This is due to the fact that we can't double-hop with our credentials. Kerberos steps in and screams HALT! HALT WITH YOUR DOUBLE-HOP COMMAND!

If you read the article, you'll see there are multiple ways to address this. I opted for the simple path of just mounting the network share as a drive letter. Simple. Easy. Can be used again without special configuration of computers, servers, or objects in AD. Keep it simple, right? Additionally, we want to minimize any special configuration of systems to accomplish this.

Now, again in the background the tool is performing a little extra logic:

For this example, I'm selecting N for NETSH TRACE. NETSH TRACE provides a CAB file by default which I'll show you in Step 10.

Again, we have some behind the scenes logic happening.

Windows 7 and Windows Server 2008 R2 do not have the NetEventSession option available. So, the utility is going to establish what version of Windows the target computer is. If the computer is either Win7 or W2K8R2 it will not allow you to use NetEventSession. It will force the use of NETSH TRACE upon you.

NOTE: Also note that the utility is going to provide a report to you at the end of execution. Within that report it includes the running processes on the target computer.

Well, one of my favorite features of NETMON and Message Analyzer is the conversation tree. I like to know which of my applications are talking and to who. This is performed on the backend by the application to map PIDS to executables. Well, the capture file might not tell me the executable, but it does give me the PID. So, by looking at the report I can identify which PID to focus on and then use that when looking at the network trace file in Message Analyzer. Yay.

As you can see, it states the location. On the target computer we can even see the temporary files which are put in place for the capture:

Once the specified time is reached, the utility sends a stop command to the target computer to end the network capture:

Finally, the tool will move the files used for the trace to the specified network share, and then remove them from the target computer.

If we open that report file, we're going to be presented with this (there are more than two processes within the actual report) : 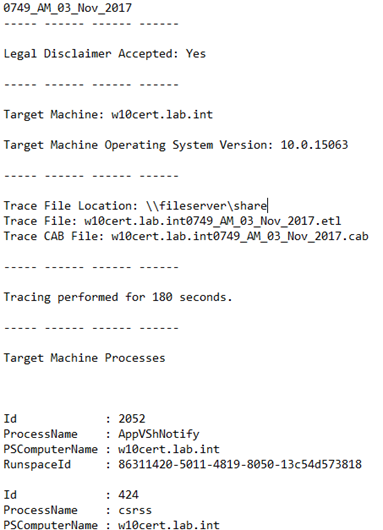 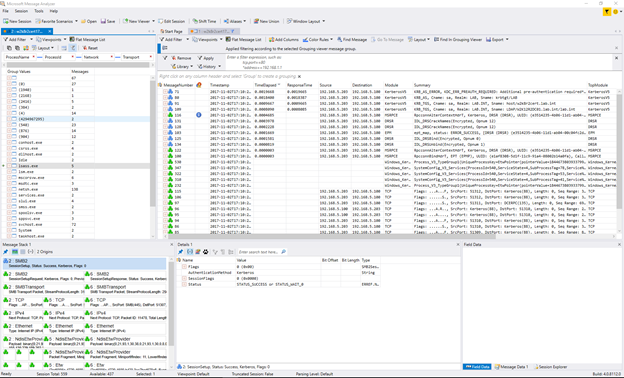 And finally, what's in that CAB file? Lots of goodies. You're going to want to explore that to better understand all the extra information which is provided about the system from this file. 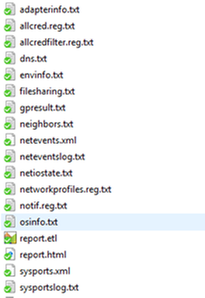 Topic #5: What are the limitation of the tool?

Topic #6: How can I customize the tool? Well, we do need to address some customization options. To do so, you simply need to modify the command invoked against the target computer within the trace type's respective function. The function names are called out below. NETSH TRACE Customization Function: Start-NETSH First, let's start with NETSH TRACE. Yong Rhee has a great article discussing some of the functionality within NETSH TRACE, specifically he uses scenarios: https://blogs.technet.microsoft.com/yongrhee/2012/12/01/network-tracing-packet-sniffing-built-in-to... Using NETSH to Manages Traces: https://msdn.microsoft.com/en-us/library/windows/desktop/dd569142(v=vs.85).aspx Let's look at some of the built-in scenarios. To do so, execute netsh trace show scenarios : 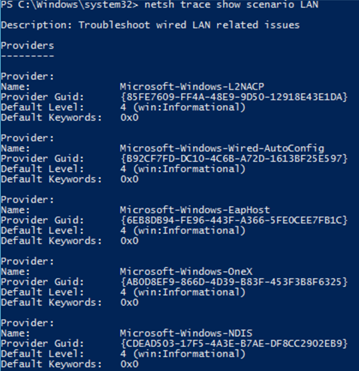 From this, we can see that one of the providers is Microsoft-Windows-L2NACP , which is currently configured to event logging level (4), Informational . Well, what if I wanted to configure that to be higher or lower. I can customize the NETSH TRACE command to accommodate this: netsh trace start Scenario=Lan Provider=Microsoft-Windows-L2NACP Level=5 Capture=Yes TraceFile=$tracefile This would increase the logging level to (5), Verbose :

Note: This is just one sample of how the NETSH TRACE option within the tool can be customized. There are plenty of other options as well. I strongly recommend that you review Netsh Commands for Network Trace: https://technet.microsoft.com/en-us/library/jj129382(v=ws.11).aspx NetEventSession Customization Function: Start-NetEvent Fundamentally, this is going to be the same as customizing NETSH TRACE. You simply have to know what you're looking for. In this case, we are going to focus on two aspects. Configuring the NetEventSession: This overall is simple. As a whole we're not going to change too much on this. I'd recommend reviewing the New-NetEventSession documentation:

Now, the real meat of the capture. The NetEventProvider. The default used natively within the tool is the Microsoft-Windows-TCPIP provider. However, there are quite a few others available. You may want to output to a file as there will be several. From PowerShell, execute: Get-NetEventProvider -ShowInstalled What you should notice is that the providers are all set with a default configuration. You can adjust these as necessary as well using: Set-NetEventProvider

By adding an additional Invoke-Command line within the Start-NetEvent function, you can easily customize the provider(s) which you wish to use within the network capture session. Customization Conclusion: For both NETSH TRACE and NetEventSession, I would recommend making adjustments to the commands locally on a test machine and validating the results prior to executing against a remote machine. Once you know the command syntax is correct and the output is what you desire then incorporate that customization back into the tool as necessary. Topic #7: References and Recommendations for Additional Reading: