In my role, I often get to review failover clusters.  Typically we look for configuration problems or deviations from best practices.  One of the most challenging aspects of managing and maintaining a failover cluster is keeping the nodes identically configured.  This means identical drivers, driver versions, service packs, hotfixes, services and applications across all cluster nodes.

Failover clusters are usually deployed with each node identically configured; however, as time passes the nodes tend to diverge.  Drivers get updated on one node, but not the others.  Hotfixes get installed on one node, but not the others. Your challenge, should you choose to accept it, is to keep the nodes the same.  What you need are some tools to audit the configuration across the nodes, to look for differences.

What do you do, though, if you want to compare Windows Server 2003 cluster nodes, or systems that aren’t cluster nodes?

Comparing Differences in Other Scenarios - Enter the PowerShell cmdlet:  Compare-Object

Start by pulling the hotfix information from a remote computer “ParentDC1”. 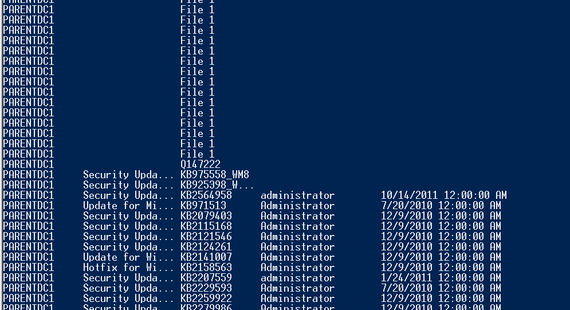 It’s Never That Easy, is it?

Now, let’s hold that data in a variable so we can use it to compare to another system.

Then, do likewise to collect information from another computer “ChildDC2”.

Now, simply compare the two collections with Compare-Object.  Note the use of the –property switch so we only compare hotfixIDs (and not hostnames, installed dates or installed by).

Compare-Object $a $b –property HotfixID 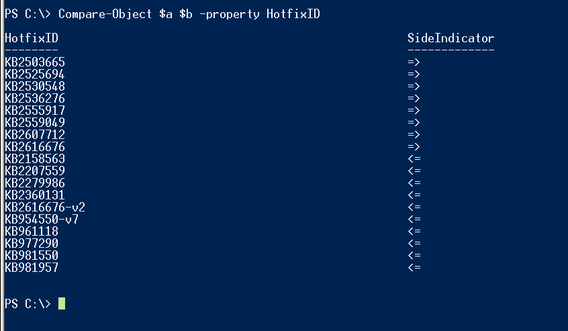 That’s pretty cool and relatively easy.  How about comparing services across systems?  Same logic, but use the Get-Service cmdlet to get the data.

Now things start getting a little interesting (or not, depending on your tastes).  Unfortunately, there is no Get-Driver cmdlet.  So we need to go into the weeds, and get some data using WMI.  Basically, we combine two WMI queries.  The first one, gets a list of installed drivers on a system.

$Query = “SELECT Name, PathName FROM Win32_SystemDriver WHERE PathName IS NOT NULL” 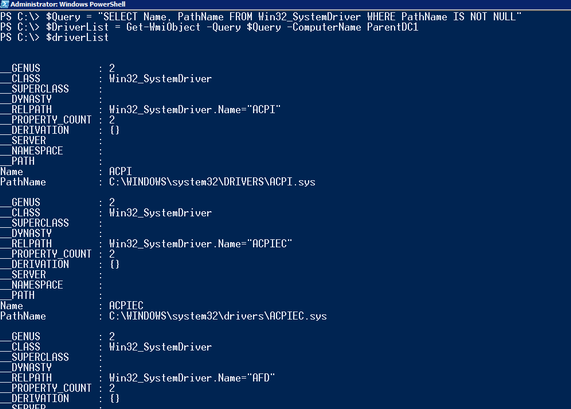 The second WMI query can take a pathname and return details about the driver (including version):

If you’ve read this far, you’ve probably figured out that you’ll need to script the solution so you put in the necessary loops and create the custom data collections.  I’ll spare you the details, and let you look through the attached script (drivers.ps1).  To use the script you can either specify a single hostname and the script will report on driver information for that host.

Or, you can include two hostnames and the script will show you a difference in drivers installed on the systems.

Or, you can include two hostnames with the –versions switch to only report differences in driver versions (a driver installed on both systems, of a different version). 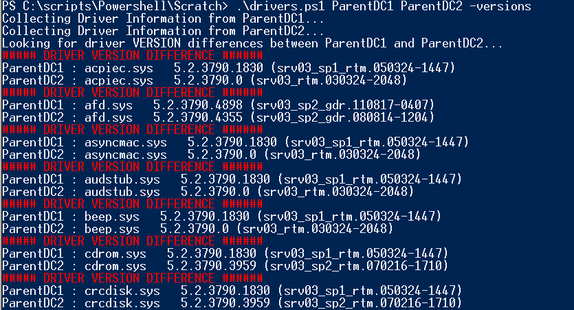 Finally, you could pass the script two hostnames with the –both switch to report both driver differences and driver version differences.  Note that the script will report if no differences are found.

I hope you enjoy the script.  Remember all the usual caveats apply to the script, so use it at your own risk.  I hope you now have some tools to keep your cluster nodes more closely configured with respect to hotfixes, services and drivers.