Turn on suggestions
Auto-suggest helps you quickly narrow down your search results by suggesting possible matches as you type.
Showing results for
Show  only  | Search instead for
Did you mean:
Introduction to Network Trace Analysis Part 0: Laying the Groundwork
By

Hi everyone, this is Will Aftring again with the Windows Debug team, here to lay the groundwork for a new series on how to get started with network trace analysis.

This is not an introduction to networking. Many of the networking topics discussed in this document will be simplifications designed to get you up and running with trace analysis. There is the assumption that you are at least familiar with concepts like an IP address and ping.

It is also important to keep in mind that most of this document discusses networking in the context of the Windows operating system and your experience may differ with other operating systems.

For deeper understanding I recommend reading the relevant request for comments (RFC) for the topic you are curious about.

Why should you care

Being able to perform basic network trace analysis is about being able to save time and energy when applications or computers start to go awry.

Nearly all modern applications use the network to some degree and knowing how your specific technology interacts with the network will help you understand not only the portion that uses the network but also how your application is designed.

If you can perform a basic network trace it can help direct further analysis and prevent at least a few trips down rabbit holes (I'm looking at you DNS).

Most importantly, by having a basic understanding of network trace analysis you are expanding your repertoire and Accelerating your IT Career.

Networking is as simple as sending a letter.

Let's say we want to send a letter to Randy, but he lives two towns over. You know that the letter is going to go through each of the town post offices on their way to Randy's house.

It is important in figuring out if your letter arrived to make sure that you check with Randy.

If you guessed Post Office B, you're correct. By looking for the letter at Post Office B we will know the following:

Now let's take the example above and remove our metaphor:

Typically, in network terminology, we use client as the machine initiating the connection and the server is the one receiving it.

If we know that our machine sent our packet to our default gateway, and it didn't arrive on the router closest to the server then we know it got dropped somewhere along the way.

Firewalls are a necessity in our security conscious world, but they can be difficult to properly configure. And by default, if we have two Windows machines communicating with each other over the network, there will be at least two firewalls we traverse through. The senders Windows Firewall and the receivers Windows Firewall.

For the sake of the metaphor above let's think of a firewall as a wall with guards put in place by the Postmaster General between Post Office A and Post Office B.

The driver from Post Office A reaches the firewall between the two locations. And when the driver gets to the guard they say "Let me look at your letter. I have a list of houses that you're not allowed to deliver to. If your destination is one that list, I am throwing it away and you can't stop me."

Unfortunately for you, Randy's house is on the do not allow list and the letter is discarded by the firewall.

Focusing on the Windows Firewalls, when we think about what our traffic looks like when we add a firewall into the picture from a technical point of view it will look something like this: 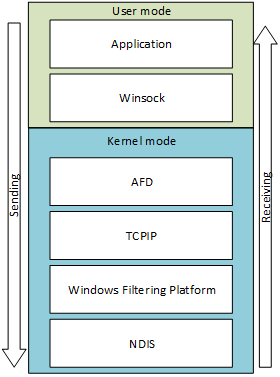 Most packet capture tools work between Windows Filtering Platform (WFP) and NDIS. So, if we do not see our traffic on the sending side then it must have been dropped in the network stack. The usual suspects in cases like this are either:

We are only going to briefly touch on subnets because to reiterate, this is not an introduction to networking.

Communication between devices is done with different protocols that have their own uses and behaviors. (These behaviors are outlined in the protocols RFC).

There are thousands upon thousands of protocols  and likely the application you care about will have its own not included on this list. Understanding the principles at play, however, will help you figure out what is happening.

The three that we will be covering in this post are Internet Control Message Protocol (ICMP), User Datagram Protocol (UDP), and Transmission Control Protocol (TCP). I have chosen these three since most of our specific application protocols either sit on top of these protocols or are a close enough comparison.

Most people know of ICMP through the ping command. Ping creates an ICMP Echo Request and sends it to the selected destination. If the destination gets that request it will reply with a response.

Here I am pinging contoso.com :

Pretty straight forward. Here is what that traffic looks like in a network trace: 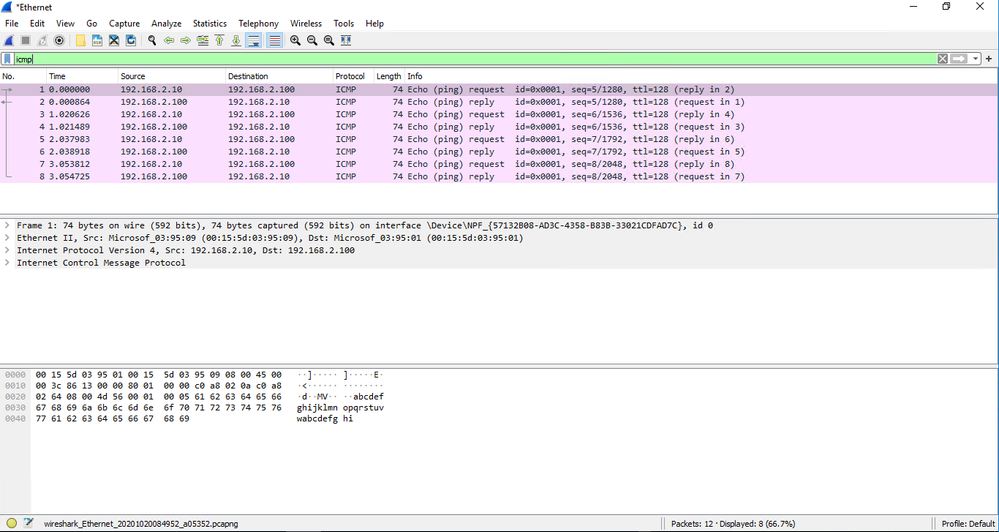 As you can see in the ping output and the screenshot of Wireshark, we send 4 requests and get 4 replies.

Thinking back to our mailing a letter metaphor. It is the equivalent of sending Randy a letter saying "Hey" and they respond with "Hey".

Applications tend to use UDP if they are time sensitive as UDP has minimal overhead and can be pushed more quickly since we do not wait for any retransmission delays. Because of this with UDP we are more interested in packet trends as that is more indicative of a problem.

A good example of this is with heartbeat traffic in Windows failover clusters. The cluster doesn't care if the server it is talking to get any single packet. The cluster is more concerned if we have missed groups of packets as the service believes that the machine it is talking to is offline.

Here is an example of cluster heartbeat traffic in a network trace:

Our sequence numbers continue to increase instead of trying to resend the same data as before. One again this is because we care more about groups of packets being lost. The data in any singular packet is less important than the stream of data being intact.

Here is a screenshot of a cluster heartbeat network trace in Network Monitor:

TCP is the protocol for reliable data transmission. It requires additional overhead, but along with that overhead comes the knowledge of whether the data you have sent has been seen and acknowledged.

Because of this, if we see that a TCP packet goes unacknowledged, we will typically see a TCP retransmit where we send the same data again and hope we get a response. If the client continues to see the data it sends is unacknowledged, after a while the client will terminate the connection.

Regardless of what application is initiating the TCP traffic, the first thing we will see in a new connection is the TCP 3-Way Handshake. This allows us to communicate between two machines over the specified port. If the TCP handshake fails, then our application can do nothing over the network.

Here is an example of a TCP handshake to bing.com over port 80:

TCP is a more descriptive protocol when it comes to discussing what it is doing. There are flags, windows, and payloads but it is important to understand a few red herrings that are common with TCP:

This is not necessarily an issue. The TCP Reset isn't a situation where the sky is falling, and that the world is coming to an end and that the network is up in flames. When we send a TCP Reset, all it means is that we are closing our connection instantly instead of proceeding with a graceful closure. We are not only done talking but let's also free up the port we were using for this connection so that we can use it again!

The ONLY time I would interpret a TCP Reset as an issue is if we receive a TCP RESET or TCP ACK RESET to a TCP SYN packet that we had just sent out. This would mean that the port we are trying to communicate with outright refused the connection.

Typically, this is an indication of a lack of a listener, but I’ll go more in depth on listeners in a future blog post.

This is one of my favorite red herrings because it is an issue that has TCP in the name.

To really understand the TCP Zero Window, we need to understand what a TCP Window is.

And let’s say our application can pull one box off the belt every 20 seconds and the maximum number of boxes that can fit on the conveyor belt at once is 3.

So here our client is putting a box on the conveyer belt at a rate of 1 box every 20 seconds.

Window Size is the number of unoccupied box slots on the conveyor belt.

Now let’s say our Receiver Application is busy doing some other work and now they can only pull boxes at a rate of 1 box every 80 seconds.

And after 20 MORE seconds:

OH NO! We have a Zero Window! What do we do from here!

It is simple. We wait.

We will wait, and our client will ask "Hey, can you receive more data yet?"

And the Receiver will either say “yes, send away.” Or “no I need more time to process this data.”

This process will continue until the application is able to start pulling data out of the buffer or the client decides this is taking too long and closes the connection.

In these situations, it is important to note that the application, NOT the operating system, is responsible for pulling this data out of the buffer.

Now that we have covered the basics, the next post will go into: