Turn on suggestions
Auto-suggest helps you quickly narrow down your search results by suggesting possible matches as you type.
Showing results for
Show  only  | Search instead for
Did you mean:
How to Update the Surface Pro 3 Firmware Offline using a USB Drive
By

Today’s blog post is a collaboration between our PFE group and premier support. Joao Botto (PFE), Kyle Blagg (PFE), and Scott McArthur (Support) are writing about their favorite device. You will see this post in the askpfeplat and askcore blogs.

Some of you may know that we launched Surface Pro 3 before its gigabit network adapter and Docking Station were available, and that has led to some customers experiencing issues such as:

· Surface Pro 3 not charging when in docking station

Both of these issues are due to older firmware. When you unbox a Surface Pro 3, there will be newer firmware available, due to the time difference between when the device is manufactured and finally makes its way to you.

If you are deploying a custom image using Microsoft Deployment Toolkit (MDT), System Center Configuration Manager, or other deployment tool you may want to address these firmware issues before you deploy your custom image. We have developed a method to use a USB Windows PE drive that automatically updates the Surface firmware when you boot with it.

Other possible workarounds, instead of using the method describe in this blog post are to have a boot.wim on a USB drive instead of PXE, or go through OOBE and immediately use Windows Update to apply the latest Surface drivers/firmware.

Firmware updates reprogram the chips inside your device, making it better than ever before. They are shipped in what we call capsules, but they look like regular drivers:

If this interests you, check out the blog post from the Surface Team about how Windows Update Makes Surface Better

Before you start this recipe you will need the following ingredients:

· Do not try to update the Touch Firmware using this method.

· This guidance will not work if the Surface Pro disk was formatted (and a new Operating System wasn’t loaded) or if the disk is encrypted.

Extract the Surface driver pack you previously downloaded, and select the EC, SAM and UEFI firmware updates. All these firmware capsules are in the Microsoft > FW folder.

Copy the EC, SAM and UEFI the firmware files to a folder. In my example I called this folder Pro3 and put it in C:\SurfaceFW\Pro3

Reminder: DO NOT try to update touch firmware using this process .

From the ADK you must make sure you have installed the Deployment Tools and Windows PE :

From that point you will have the Deployment and Imaging Tools Environment (which is essentially a command line window with additional tools in the path). Run it as Administrator. 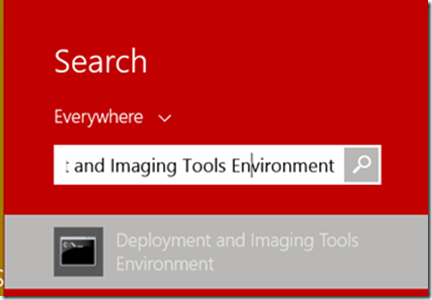 At this point you're ready to start preparing a version of Windows PE x64 that will be used to update the firmware. It's very important to use the x64 version since x64 UEFI isn't able to load an x86 OS.

When you install the ADK the default folder (on a x64 install of Windows) for Windows PE is C:\Program Files (x86)\Windows Kits\8.1\Assessment and Deployment Kit\Windows Pre-installation Environment

In that folder you will find the WinPE images for x86 and x64, and some scripts that make the creation of a WinPE flash drive extremely easy.

From the elevated prompt you will have to start by running the first script by executing the command copype amd64 C:\WinPE_amd64 to place the original WinPE image in that folder.

Then you will use the same elevated prompt to run MakeWinPEMedia /UFD C:\WinPE_amd64 E: (the E: drive is my flash drive, which will be reformatted, and C:\WinPE_amd64 is the working folder I supplied in the previous command). 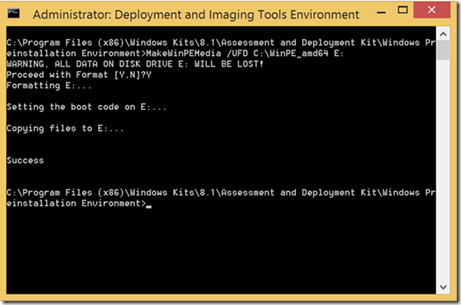 The first step is to create a folder (in my case c:\mount), and then mount the mount the WinPE image using this command: dism /Mount-Image /ImageFile:E:\sources\boot.wim /index:1 /MountDir:c:\mount 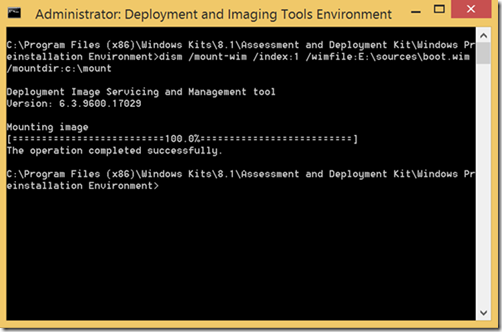 Then you should inject the firmware updates into Windows PE: dism /Image:C:\mount /Add-Driver /Driver:C:\SurfaceFW\Pro3 /Recurse

You should see all firmware updates being successfully injected. 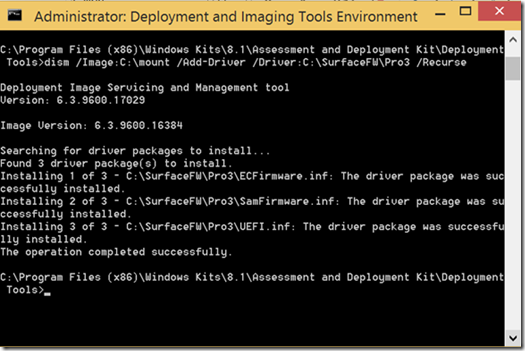 Note: Make sure all three firmware updates were successfully injected into Windows PE. You should see the “The driver package was successfully installed” message like in the example above.

To unmount the WinPE image just run the following command: 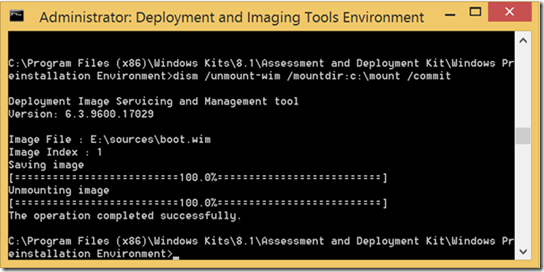 You can now boot to your new WinPE environment by plugging the flash drive to your new Surface Pro (while it's turned off) and then start the device with Power + Volume Down . Keep holding the volume down button until a few seconds after your device displays the Surface logo. Once WinPE loads, you'll see a blank screen and a command prompt will automatically process the updates.

If you want to validate that the update was successful you can boot into the UEFI settings (start the device by pressing Power + Volume Up) and look under device information. If you see the Asset Tag field that would indicate your UEFI firmware was updated from the version that shipped in the original image. Over time this method may not be usable for validation since at some point the image that is shipped with the device will already have this version of the firmware by default. Another option for validating firmware versions is to press Shift+F10 at the first page of the OOBE and open devmgmt.msc to check the firmware versions. Note:  If you use this process to update the firmware and then goto Windows Update, you will likely see a firmware update offered.  This is normal.  The firmware is updated but the driver currently installed is not up to date.  The offered update will install the driver that shows the updated firmware

We will be improving this process over time so look for updates to this blog for some additional features such as automatically checking for battery level and other ways to determine the firmware was updated.

Scott “I fix all Surface Issues” McArthur, Kyle “my Surfaces are on TV” Blagg, and Joao “let’s do it!” Botto