How to Reduce the Size of the Winsxs directory and Free Up Disk Space on Windows Server 2012 Using Features on Dema...

** If you're looking to free up disk space and reduce the size of the WinSxS directory on Windows 7 SP1, make sure to check out the following blog post on this topic**

** If you're looking to free up disk space and reduce the size of the WinSxS directory on Windows Server 2008 R2, make sure to check out the following blog post on this topic**

Remember these on Windows 2003 Server? 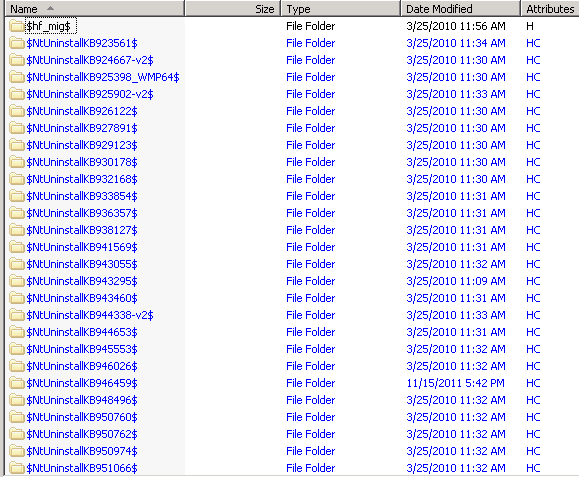 I cannot count the number of times I’ve been asked how to clean this up. Apparently I’m not the only one that hates clutter.

And what about that annoying prompt to insert your product CD-ROM now at the most inopportune time? I’ve literally been on mission critical server down situations where no one could locate a CD.

Introduction of the Component Store

So with Windows Server 2008 and later, we moved from that to the Windows Side-by-Side (WinSXS) directory and there was much rejoicing as it introduced many new features that made the administrator’s job much easier: 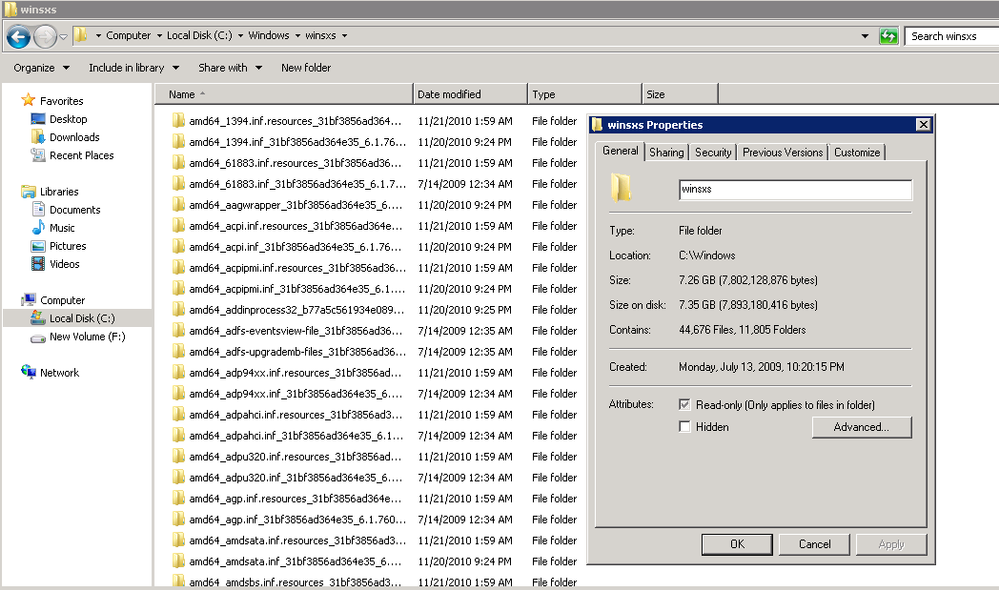 What is this winsxs directory and why is it so large?  See below.

Can I delete winsxs? No.

Can I move winsxs? No.

Can I cleanup winsxs? It depends…

The gist, you could uninstall a role/feature, but it was still there…along with all the updates that might ever be needed.

There’s also a good content on how to reclaim space after installing a service pack:
http://support.microsoft.com/kb/2795190/EN-US or if you’re looking to cleanup disk space on Windows Server 2012 in general, check this out: http://social.technet.microsoft.com/wiki/contents/articles/15221.enabling-disk-cleanup-utility-in-w...

Then came Windows Server 2012 Features on Demand with the ability to remove any unwanted role/feature and all is well.  So far.

And it’s easy too with 3 simple steps : 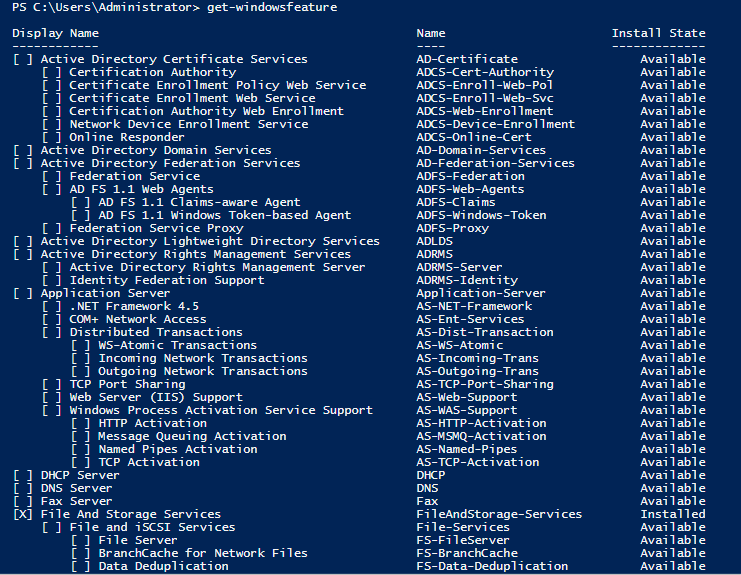 Tip : Add the –Whatif switch to the end to see exactly what will be removed without actually removing it.

So why do this? I’ll leave you with three reasons :

1) Decrease the footprint of the base server install

2) Reduce the number of potential patches (and reboots)

But don’t worry. We’ll let you add them back if you change your mind. :)

So what happens if you try to reinstall a role or feature that has been completely removed? Well, we alert you that the feature or role is missing and we will automatically attempt to retrieve it from Windows Update (or WSUS), a source location specified by Group Policy, or you can manually specify an alternate source path.

For starters, when you run the Get-Feature command, it will show the role or feature as Removed: 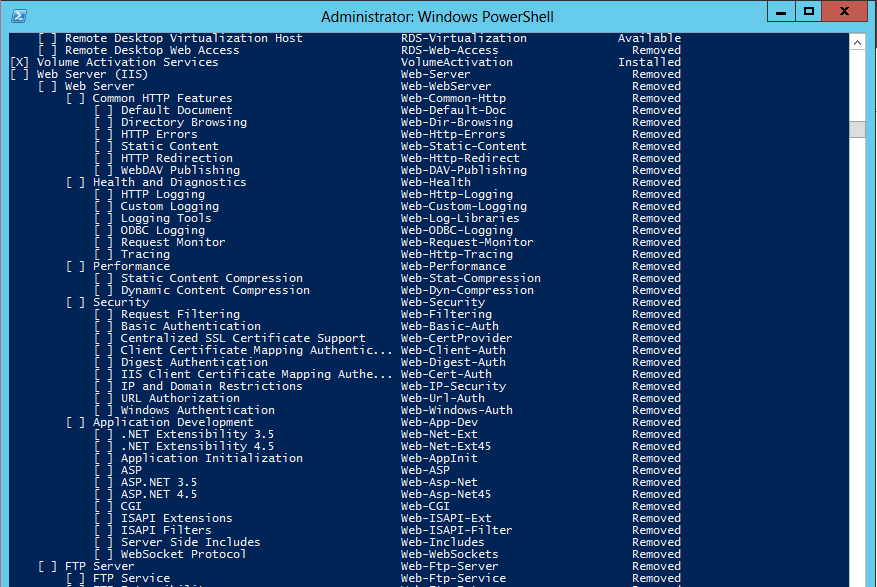 If you still attempt to add the role or feature via PowerShell, here’s what it looks like:

At this point, it’s obvious we do not have the Group Policy configured with the alternate source location. We can either grant the server external internet access and allow it to get the feature from Windows Update, if possible, or we can specify a source location with our Install-WindowsFeature command by specifying the –Source switch. Here’s an example: 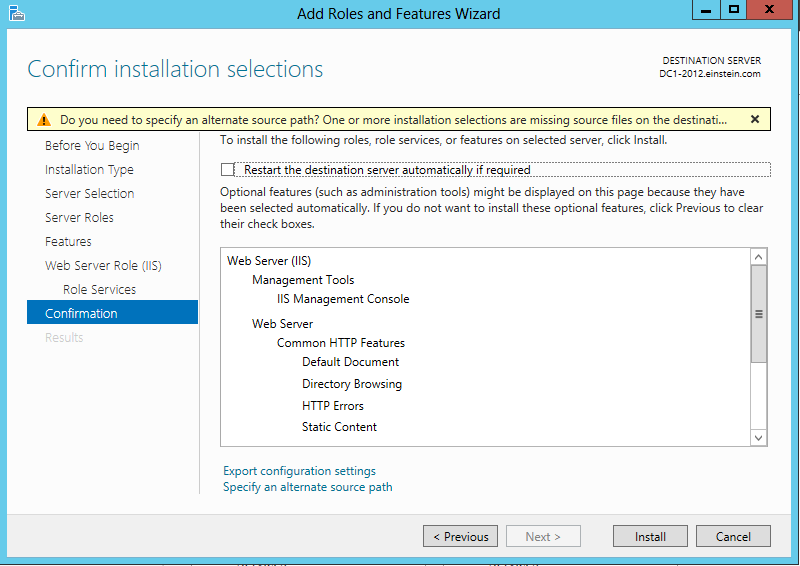 If you click on the Specify an alternate source path option, you are presented with the following: 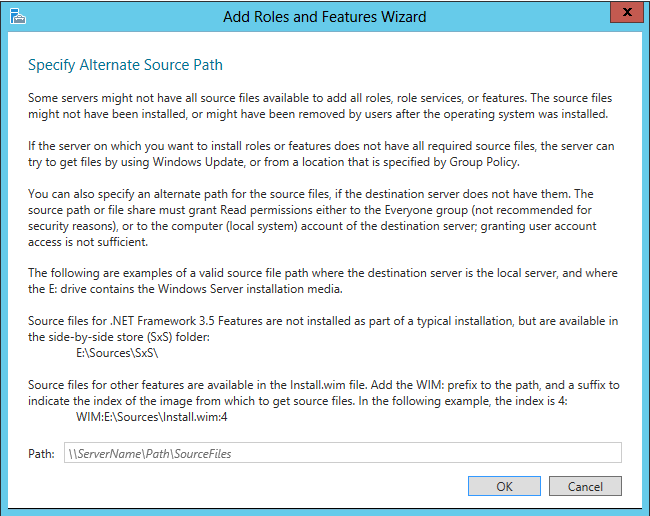 You can specify a share with the install.wim file, but you also need to specify the index of the image within the WIM file. More on that here in a minute. 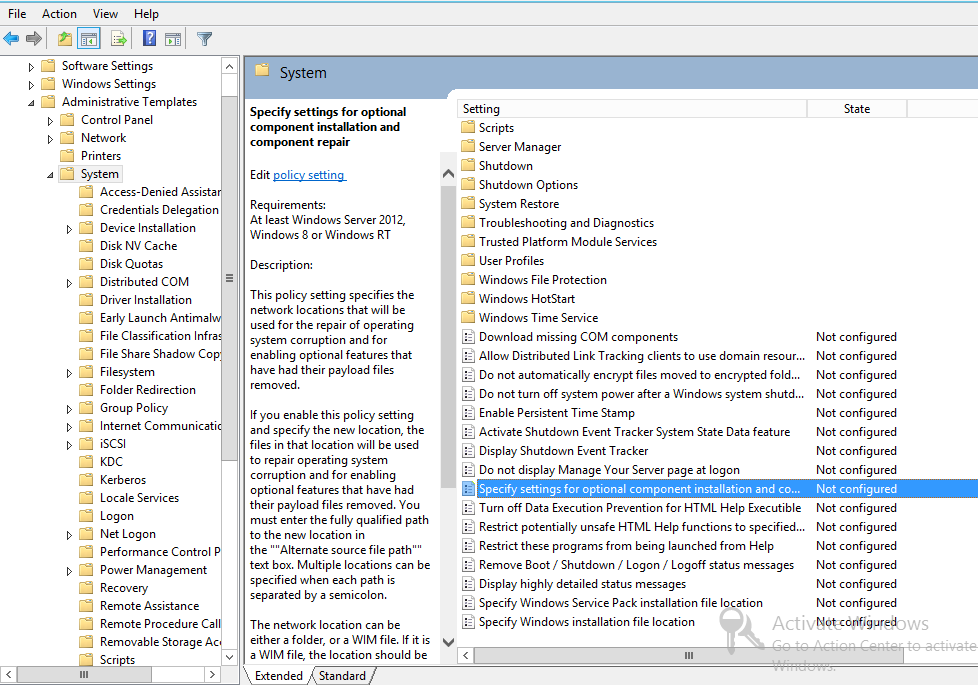 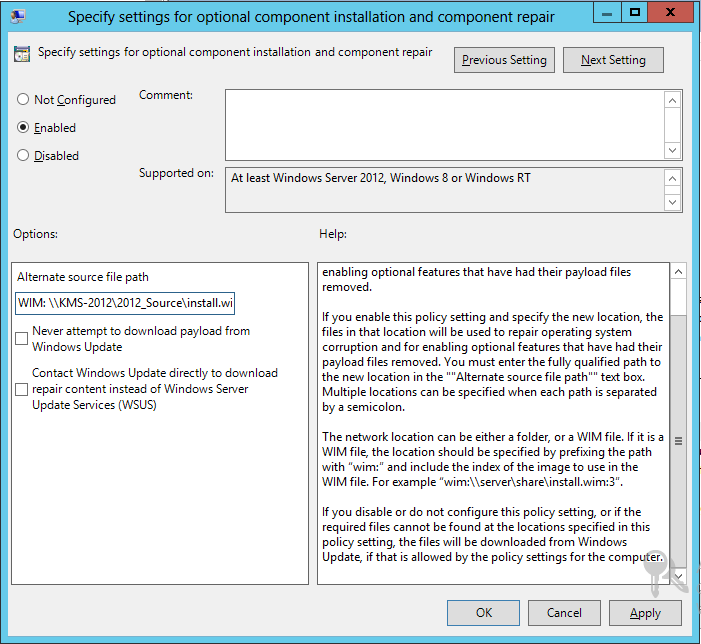 Notice the options to Never attempt to download payload from Windows Update or Contact Windows Update directly to download repair content instead of Windows Server Update Services (WSUS) . These options can come in handy depending on the configuration of your environment.

I personally think it’s cool that we can now point to an install.wim file instead of a share with a flat of the install media.

For those of you that don’t know, a .wim file is simply a container that contains one or more images. These can be custom images that you’ve created and captured yourself, modified images that have modifications such as injected security updates, or just the base images contained in the default install.wim file pulled out of the Sources directory on the Windows Server 2012 media.

Therefore, the index number we provide could be different depending on the install.wim we are pointing to as our source.

To find out which image you would like to use, run the dism /get-Wiminfo /wimfile:{location of install.wim} to list out the images contained within the install.wim file. Here’s what this looks like for the default install.wim: 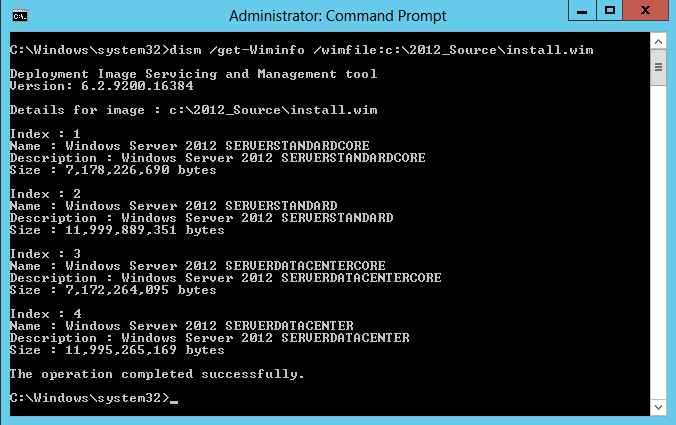 Since I’m deploying mainly Windows Server 2012 Standard in my environment, I need to specify an index of 2. The majority of you are probably deploying Windows Server 2012 Standard as well, unless you’re setting up Hyper-V servers, then its likely Datacenter or potentially Server Core, then it’s one of the Server Core editions. However, there are no edition-specific role differences between Standard and Datacenter edition. So really, I could specify an index of 2 or 4 and be just fine.

Now when reinstalling my role or feature, it uses this source and works like a champ!

Things to keep in mind when using the install.wim as your source:

If all that is too much to keep up with, just use Windows Update. As long as the service is not disabled, blocked at the firewall, or blocked by group policy; if we don’t find what we need in the specified install.wim or on the server, we’ll automatically search Windows Update. It works like a champ. :)

~ Charity “Will slim base installs be the new wave of the future?” Shelbourne