Hi Folks. Lakshman Hariharan here with a post on a cool tool from our good friends on the Azure team called Graph Explorer. In a nutshell, the Azure AD Graph API provides programmatic access to Azure AD through REST API endpoints. Applications can use the Graph API to perform create, read, update, and delete (CRUD) operations on directory data and objects. For example, the Graph API supports the following common operations for a user object:

· Create a new user in a directory

· Get a user’s detailed properties, such as their groups

· Update a user’s properties, such as their location and phone number, or change their password

Since I am not a programmer even if one were to apply the most generous interpretation of the word, this feature called Graph Explorer that I came across recently peeked my interest. Graph Explorer, as the name suggests, allows you to explore or browse your Azure AD with absolutely no programming skills required. Several blogs abound discuss what Graph Explorer is, so I intend to use this post to show you how you can, if you have an Azure AD tenant setup, start using Graph Explorer. The post is broken down into four steps.

So that being said, let’s get started. Before you can follow along this step by step, here are few things you will require

1. An online Azure AD tenant setup with at least a handful of users populated either via DirSync or AADSync from your on-premises Active Directory environment.

2. An online Service Principal (MsolServicePrincipal) that has permissions to access your online Azure AD tenant.

My online Azure AD tenant is called lhazure.com so I used the Connect-MsolService cmdlet to connect and authenticate to Azure AD using an account that is a Global Administrator

a. Once logged in using an account that is a Global Administrator, execute the following PowerShell cmdlet to create the new Service Principal

This will result in something similar to the following screenshot

Since I didn’t specify a value for the symmetric key, one was automatically generated for me.

b. Execute the following cmdlet to give the Service Principal you created in the previous step rights in Azure AD. At the risk of stating the obvious, replace the value for RoleMemberObjectID with the value of the ObjectID created by you. This should return a successful result.

Open Internet Explorer and navigate to https://graphexplorer.cloudapp.net . This will result in landing at the page depicted in the screenshot below 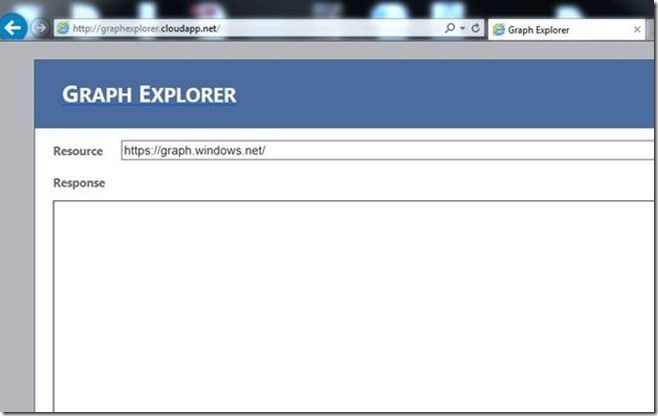 Under “Resource” , enter the following, replacing <yourAzureADTenant> with the actual name of your Azure AD tenant. In this case I am interested in getting a list of users,

When replaced with my Azure AD tenant of lhazure.com it looks like the following screenshot 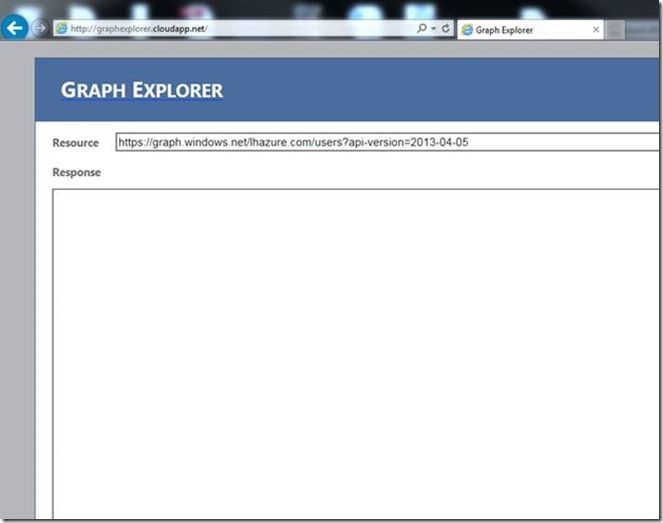 Now click “Get” on the right of the Resource URL.
This will bring you to the login prompt where you will enter the AppPrincipalID and Symmetric key generated in Step 2.

As you can see, you also have the option of using the Demo Company as well but in this case I am demonstrating using an actual Azure AD tenant. 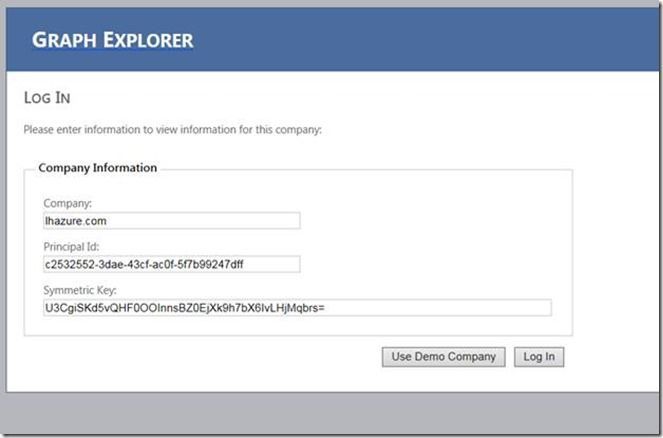 Once successfully logged in, you will see output similar to the following screenshot. 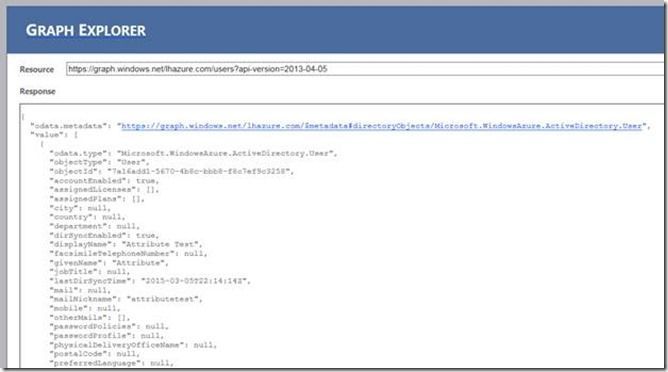 For a list of common Graph API queries refer to this article. Now let’s walk through a few examples using lhazure.com.

In this first query I am interested in seeing the properties of a user named John Doe that has a UserPrincipalName of johndoe@lhazure.com . So I enter the following request:

This results in the following output. Note some of the properties highlighted.

Well, that’s it from me, for now. Hope you find this post as useful and the feature as cool as I did. Happy exploring...