Turn on suggestions
Auto-suggest helps you quickly narrow down your search results by suggesting possible matches as you type.
Showing results for
Show  only  | Search instead for
Did you mean:
Generating a trusted TDE Certificate in the proper format from a Certificate Authority
By

I recently worked with a customer who was attempting to deploy Transparent Database Encryption using a trusted certificate which was generated by a certificate authority (CA). They were unable to import the certificate using the CREATE CERTIFICATE command as it kept failing with a 15468 error. This blog post attempts to explain this error and demonstrates a solution to the problem.

As a general best practice using EKM is preferable to generating the keys manually as it makes a distinct separation between the key and the database being protected by making the key inaccessible by the SQL Server engine.

SQL Server is capable of using certificates which incorporate the .DER (Distinguished Encoding Rules) file format. These files are binary encoded certificates which can typically have a CER or CRT extension. While Certificate Authorities and cryptography tools like OpenSSL can encode in .DER file format, they can also encode certificates using .PEM or Privacy Enhanced Electronic Mail which uses Base64 formatting. Unfortunately the Base64 format is not compatible with SQL Server.

Some Certificate authorities store both the public and private keys in a personal exchange format or PFX format. SQL Server won’t be able to import these PFX files directly since the CREATE CERTIFICATE command is expecting a DER-encoded certificate (.CER). As a workaround, the Microsoft PVK converter utility can be used to convert the PFX certificates to PVK/DER format. More information can be found in KB Article 2914662 “ How to use PFX-Formatted certificates in SQL Server ”

Any certificates that are used for encryption in SQL Server must use the DER formatting. Certificates coded in Base 64 format which are subsequently imported into SQL Server using the CREATE CERTIFICATE command will generate the following error:

1. First we must install OpenSSL 1.x and the Visual C++ redistributables from http://slproweb.com/products/Win32OpenSSL.html

2. Open a command prompt, change to the ‘c:\openssl-win32\bin’  and execute

3. From the same directory, generate the private key 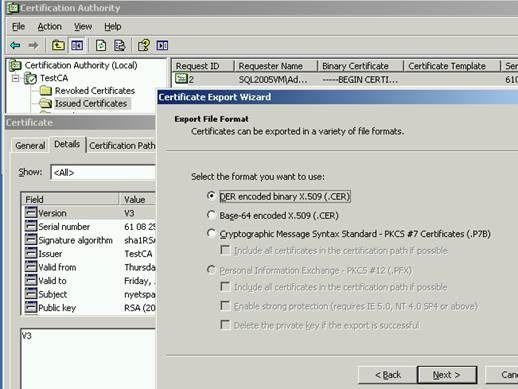 7. When I attempt to import the base64 version of the certificate, it fails with a 15468 error:

8. If I switch to the DER encoded certificate, I am able to import the certificate successfully.

9. I then Confirm that the Certificates are imported:

10. Finally, I use the DER encoded certificate to encrypt the database: