Connect an On-premises Network to Azure via Site to Site VPN and Extend Active Directory onto an IaaS VM DC in Azur...

As we all know, the Cloud is here, it's here to stay and its benefits are forcing businesses to consider it. We are in a transition period in Information Technology and I'd say we're far down the road to nearly every IT infrastructure having some sort of Cloud interoperability, service or connection. These changes are evolving the IT Pro career, too. We all know, you can't stop progress, so embrace the changes and evolve your skillset to include "cloud technologies."

I know, I know … I can already hear you: "Nice…now I have yet another thing to ramp up on and maintain for my skillset." This is true, but it has always been true in IT. We gotta keep learning/re-learning in this field we've chosen.

My own cloud journey has run the gamut … a while ago, I tried to ignore it because I didn't understand it. Then, I dabbled in a few Azure services/scenarios. After attending a recent internal training event with a lot of content for Windows Azure, I've jumped into the deep end of the pool and I'm trying to stay afloat in this rapidly evolving space.

One scenario I worked through recently was a cross-premises Site to Site VPN to Azure but only now did I take the time to document it and write it up.

Herein, I share with you my 'dummies guide' to setting up a site-to-site VPN between Azure and an on-premises site (corporate network or basement lab in my case). After I get the VPN up and running, if you're still reading, I cover a high-level process of creating an Azure IaaS VM and promoting it to be a replica DC for an on-prem Active Directory environment.

I created the Visio below to help those visual learners (like me) and I've also included a "worksheet" to help you plan/prep for this endeavor. 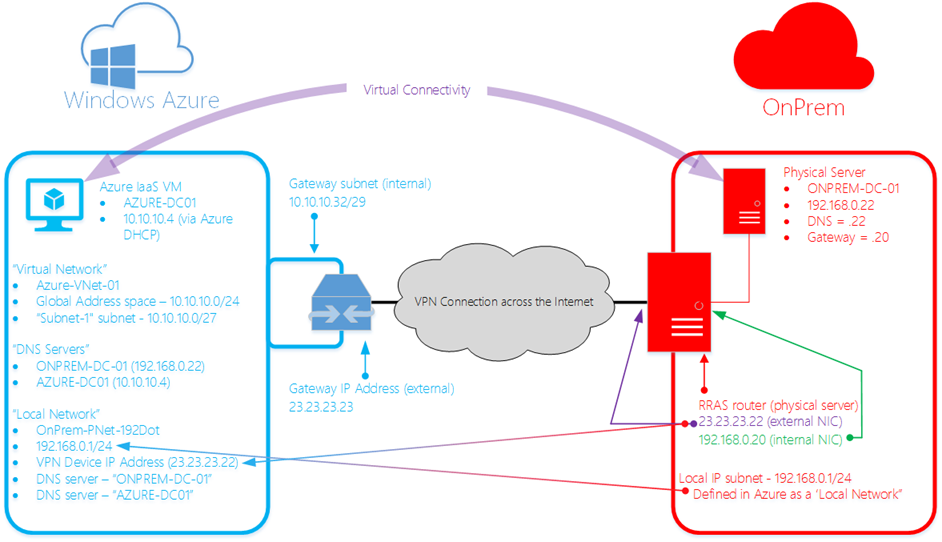 On most days, I have a typical home network with a cable modem, then a wireless router, and then PCs.

Before I started this work, I filed a change-control request with my family because they were going to suffer an 'enterprise-wide' Internet outage while I did this. I by-passed all of my typical home network gear for this lab and plugged one leg of a dual-homed physical server (2012 R2) directly into my cable modem and let it pull a public-facing IP. I did an IPCONFIG on the router/server and made a note in my worksheet of the public IP.

Next, per my worksheet planning, I configured the private leg of my dual-homed physical server with a static IP address of 192.168.0.20 but left the gateway blank . With gateways, as with Highlanders, there can be only one.

Before getting too far, I'll try to clarify some Azure terminology. The vocabulary is often my first stumbling block when I'm learning something new and Azure was no different.

What does Azure mean by 'Local Network?' What is a 'Gateway subnet?' What does a 'DNS Server' in an Azure Virtual Network refer to and what should I put in there? I heard Azure doesn't support static IP addressing – how do I assign IPs to my systems? How do I define other NIC settings for Azure-based VMs? Can I use WINS? No, you can't use WINS. J

Allow me to try to simplify/clarify/paraphrase:

Let's go through and cover each section of creating a Virtual Network in Azure, starting with DNS Servers.

Sign in to the Azure portal and Click "NETWORKS" then "DNS SERVERS" then "REGISTER A DNS SERVER" to get started: 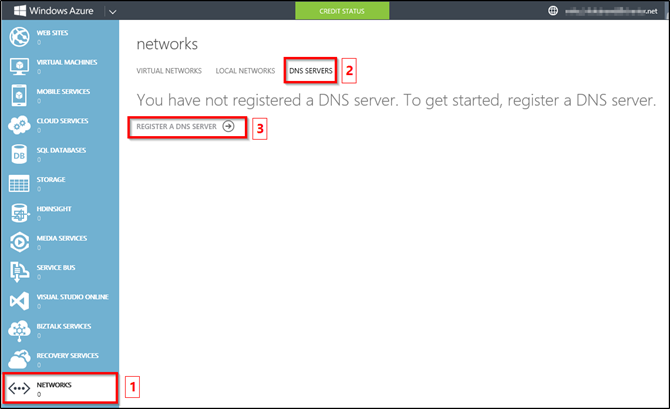 Figure 3: Register a DNS SERVER in the Virtual Network Wizard

Figure 4: On-prem DNS Servers are defined. I can edit this list later and add in my IaaS DC/DNS servers and IP addresses to provide DNS local to the Azure Virtual Network for fault tolerance in the event the VPN has issues. You can add up to 9 entries here. 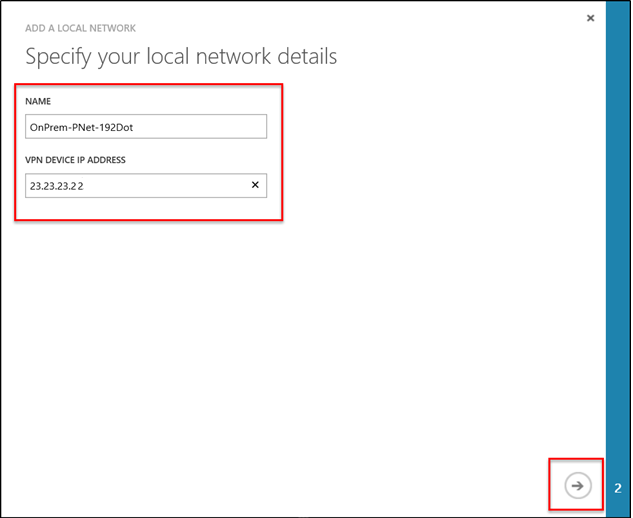 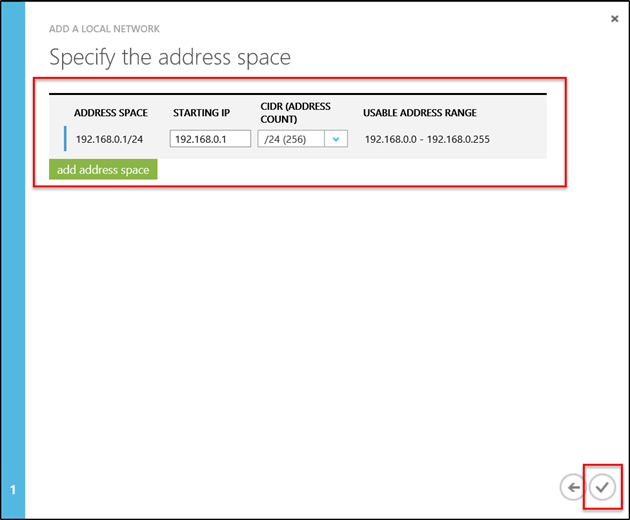 Figure 8: An Azure Local Network has been defined 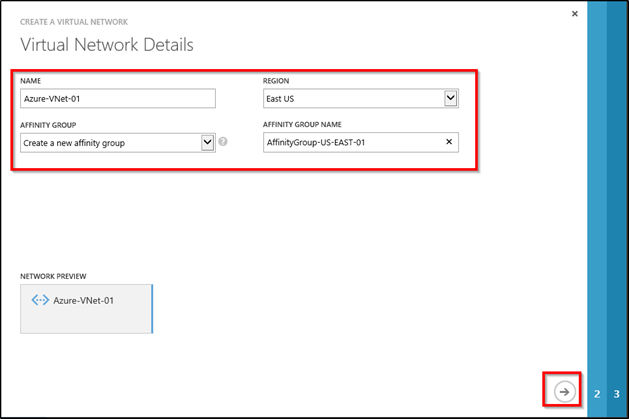 Figure 10: Name the Virtual Network and create an Affinity Group in a regional Azure Datacenter 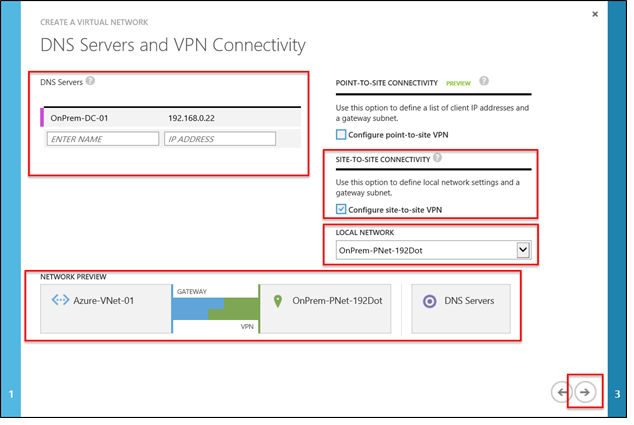 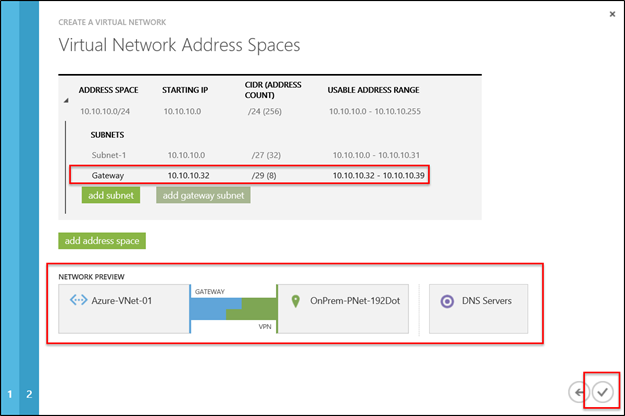 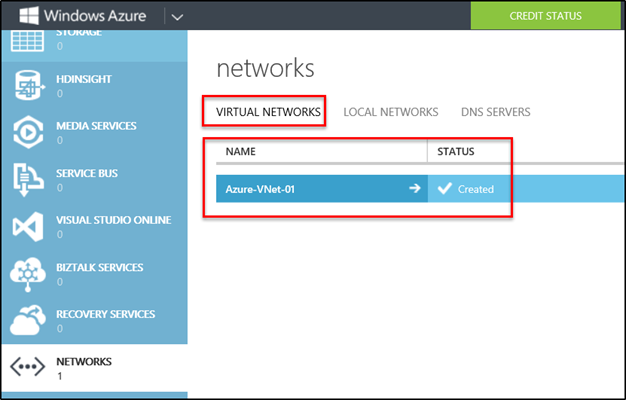 Figure 14: An Azure Virtual Network has been created

Once my Local Network, DNS Servers and Virtual Network were all defined/created in the Azure portal, I clicked CREATE GATEWAY with Dynamic Routing (below). 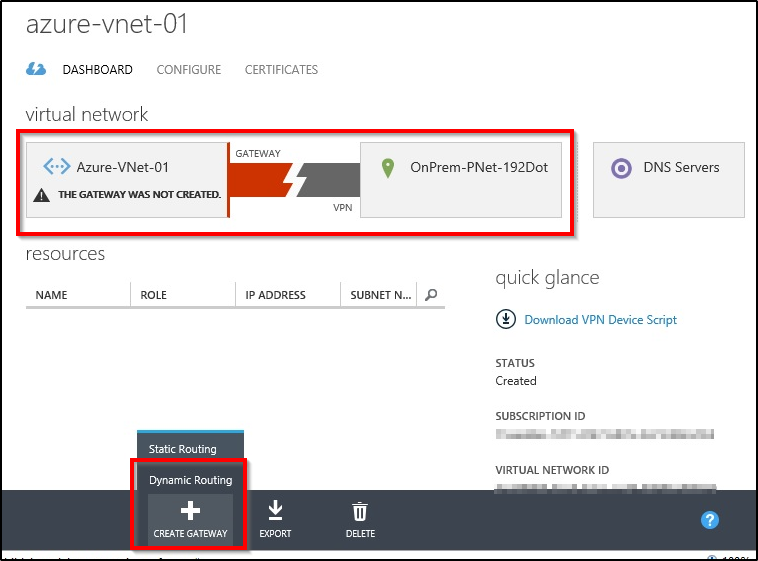 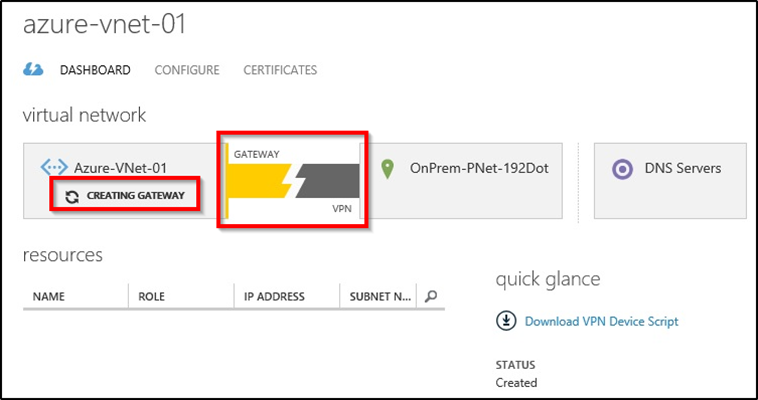 Figure 16: VPN Gateway is being created

Figure 17: VPN Gateway created but not yet connected ( IP Address is for illustration purposes only )

Ta-da! The gateway was created (the blue GATEWAY in the graphic above) but note, it shows "DISCONNECTED" on the OnPrem side. Before the connection will work, I need to configure the on-prem Windows Server as a VPN RRAS router.

After the Gateway has been successfully created and the WS 2012 R2 RRAS server is configured, I chose to CONNECT the Gateway

Figure 18: VPN is connected and data is passing. HOO-HAH!!

Once the Azure VPN gateway connected to my on-prem 2012 R2 VPN/router, I reviewed/refreshed the RRAS console again. At that point, it showed "Connected" with substantial incoming and outgoing traffic.

If you're following along at home and this is all working for you, congratulations!!

Once I connected my on-prem environment to Azure via VPN, I built out a replica DC on an Azure IaaS VM.

A few links with some GREAT content with much more detail for this:

I don't walk through each step of the VM build process here (it's really very simple) but notice the VM was created on the IP subnet in Azure that I created within the Azure Virtual Network back at the top of this post ("Subnet-1"). 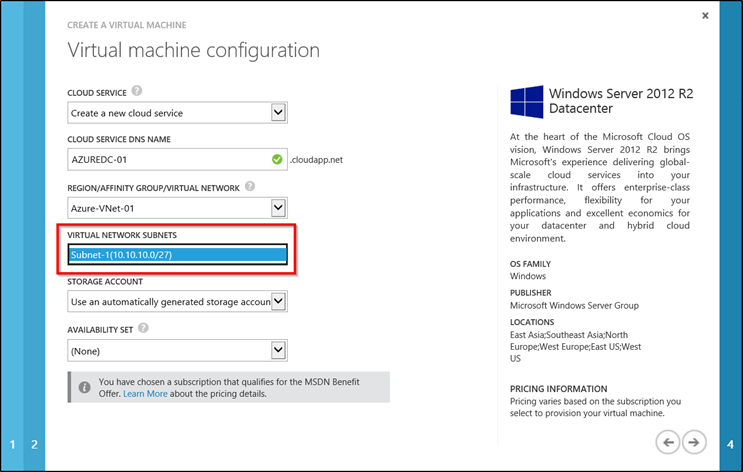 Once the VM was provisioned, I used the Azure Portal to connect to the new workgroup VM (below) …

Take a moment and think about this…

Since I had VPN connectivity at this point, I could have connected directly via RDP from an on-prem system using the VM's private IP address (which can be obtained from the Azure Portal): 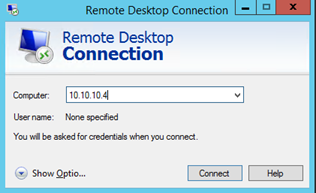 Recall, when the IaaS VM re/boots, it picks up its "Azure reserved" IP address and the DNS servers I defined in the Azure Virtual Network.

With DNS working from the Azure VM to on-prem, I successfully joined the IaaS VM to the on-prem domain and rebooted it.

It was really quite exciting to get this all set up and working ... but we ain't done yet!

Next, I added the AD DS Role to the IaaS VM and promoted it into AD as a replica DC in the HYBRID.LAB forest (my demo/lab).

I had already created the proper AD Sites, Site Link and Subnets for my Azure world and my on-prem world in my lab AD forest configuration.

As a result of that pre-work, during the promotion wizard, I was able to choose the target AD Site for the new Azure-based DC, as well as select the on-prem DC for initial replication: 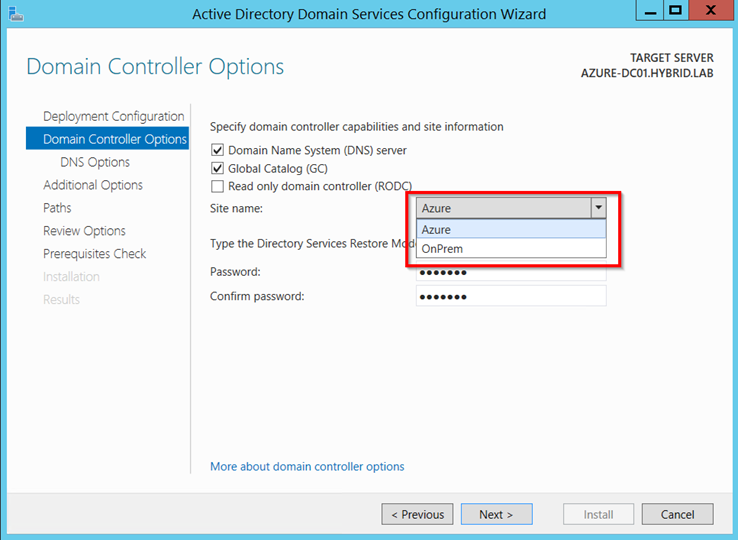 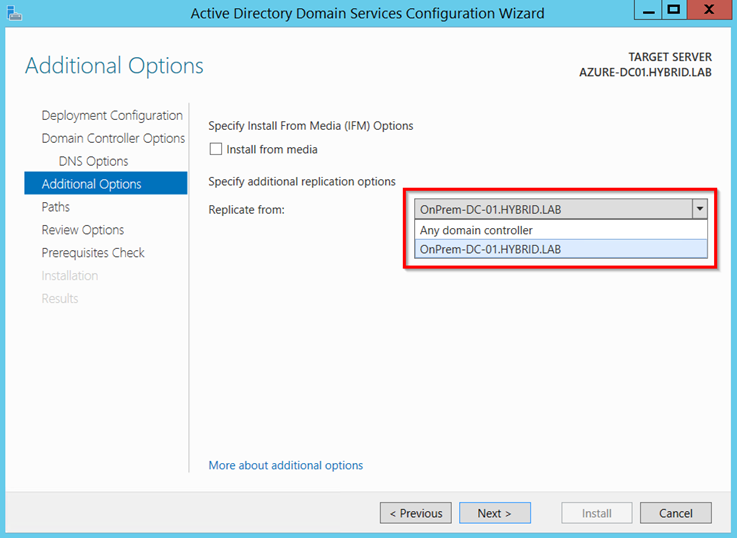 After the DC promotion and reboot, I saw my shiny new DC up in Azure-land (AZURE-DC01): 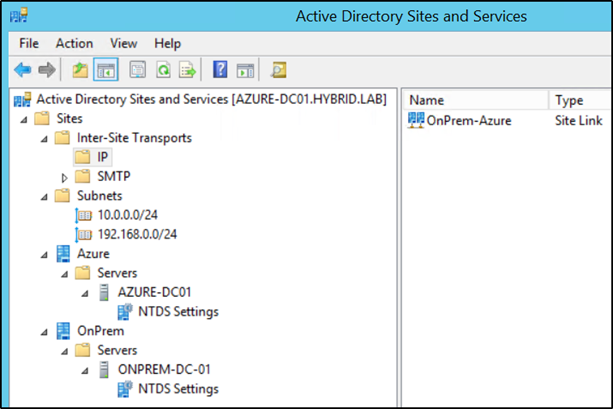 There are a lot of new concepts here. If you're struggling, give yourself a break ... take a deep breath; hum a tune; go chase some squirrels or something.  Then come back to this - it took me more than just a bit of patience before it all clicked and I got the VPN dance to succeed.

Like I said at the outset, the Cloud is here; the time is now to start thinking about how Cloud technologies will fit into your IT career and the solutions you design/operate/support.

Thanks for reading and I hope you found it useful.