Turn on suggestions
Auto-suggest helps you quickly narrow down your search results by suggesting possible matches as you type.
Showing results for
Show  only  | Search instead for
Did you mean:
ADFS: Excluding a Specific User Group from MFA
By

First published on TechNet on Jul 26, 2016
Hi there, JJ Streicher-Bremer back again, this time talking about ADFS and multi-factor authentication. I had a need to configure an environment where everyone was required to use multi-factor authentication _except_ for folks in a specific AD group. When looking at the ADFS 3.0 MFA configuration GUI there is a simple way to add users and groups to enforce the use of Multi Factor Authentication for specific users/groups. 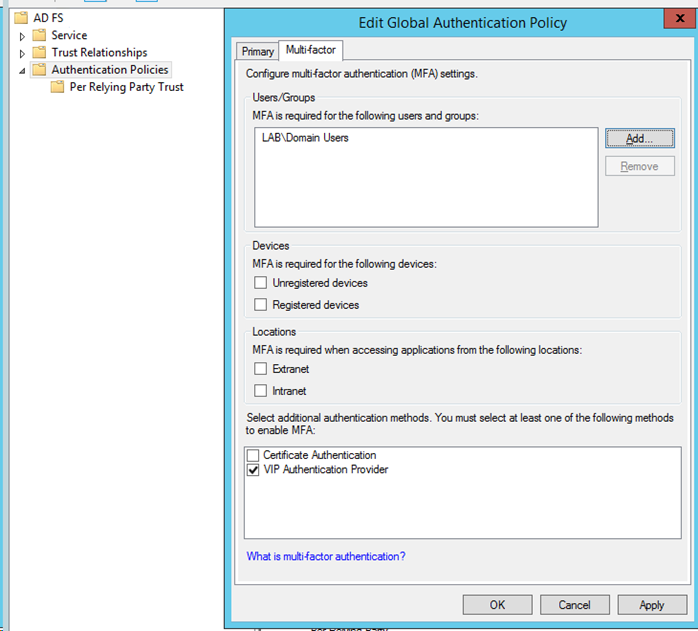 So if I configured my ADFS to require MFA for all domain users, how might I exclude a set of users from this requirement? What we don't have via the GUI is an easy way to _exclude_ a user or group of users from the requirement of MFA. The good news is there is a fairly simple way to make this happen, and we get to use PowerShell to do it! First step is to define a few things:

When I started down this path I was pointed to an amazing blog post by Ramiro Calderon here: https://blogs.msdn.microsoft.com/ramical/2014/01/30/under-the-hood-tour-on-multi-factor-authenticat... Ramiro does a really great job of describing how the claims engine and pipeline work along with good descriptions on the claims themselves. This really jumpstarted the whole process. Thanks Ramiro! After reading (and re-reading) the above blog post I determined I needed to come up with a rule that said something like this: If a user is a member of "Domain Users" but _not_ a member of the group "No MFA for these users", enforce the use of Multi Factor Authentication. Since the ADFS claims rules engine does not understand group (or user) names directly, we have to convert those into SIDs. That can be accomplished via ADUC or through PowerShell (get-adgroup "domain users"). When we break down the pieces we have 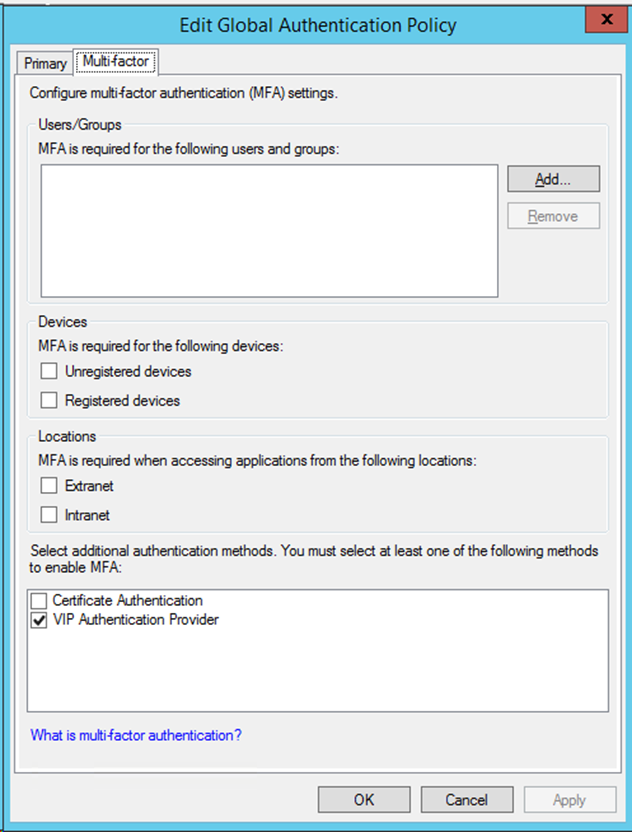 Now I had to add my ruleset to the "Additional Authentication Rules" for my relying party trust: Set-AdfsRelyingPartyTrust –TargetRelyingParty $rp –AdditionalAuthenticationRules $GroupMfaClaimTriggerRule Once I set this up all the users in my lab domain were forced to use MFA, except for those uses in the "No MFA for these users". Even better news is that in Server 2016 we should be able to accomplish all this via the "Access Control Policies" GUI directly: 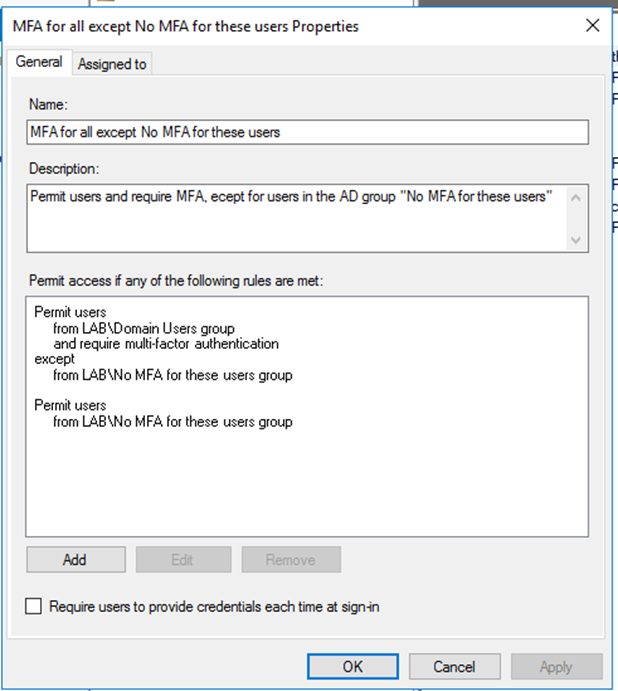 I hope this blog post helps to explain by example some simple ADFS claims rules and how to load those rules into ADFS 3.0 as well as something to look forward to in Server 2016.