BizTalk artifacts are typically deployed in production once they have been thoroughly tested for functionality, stress, performance, integration, to name a few. Regardless of the amount of testing though, a system is vulnerable to the external data being received. Here, we consider what happens when BAPI transactions requests contain invalid data, such as fields that are not of the right formats or do not have expected values. The reader should be familiar with the orchestration presented in Debatching SAP BAPI Transaction Requests, which is augmented here for better error handling and fault-tolerant batch processing.

Generally speaking, after the BAPI transaction requests are created, validation can happen:

(1) locally, in the BizTalk host instance, when the BAPI transactions are published and sent, and

(2) remotely, on the SAP server, when the transactions are received and processed.

Local failures result in the SAP adapter throwing such exceptions as:

"A message sent to adapter "WCF-SAP" on send port "…" with URI "…" is suspended. Error details: System.InvalidOperationException: The Inner Channel to use was not found for the key."

or other exceptions documented in Exceptions and Error Handling with the SAP adapter.

Remote data failures correspond to the SAP server returning error messages in the RETURN elements of the BAPI responses.

The distinction local/remote is important because error handling is implemented differently depending on whether errors happen on outbound or inbound data flows. For instance, as we shall see, BAPI_TRANSACTION_COMMIT and BAPI_TRANSACTION_ROLLBACK are not always applicable depending on how validation fails. From a customer perspective though, errors from invalid data need to be surfaced consistently regardless of where the errors happen. Some may expect "fail fast", where any invalid data should abort further processing. Others would rather handle invalid data with graceful error handling. This is especially relevant in the context of BAPI transactions where a Logical Unit of Work (LUW) may comprise a large number of transactions and the "one-fails/all-fail" behavior would be cost-prohibitive; In such cases, it would be preferable to keep the processing going rather than to suspend an orchestration instance for some invalid field in one out of many transactions (e.g., a vendor no longer exists but a request uses the vendor's code).

The first stage of the main orchestration is the debatching pipeline explained in detail in Debatching SAP BAPI Transactions and summarized below. 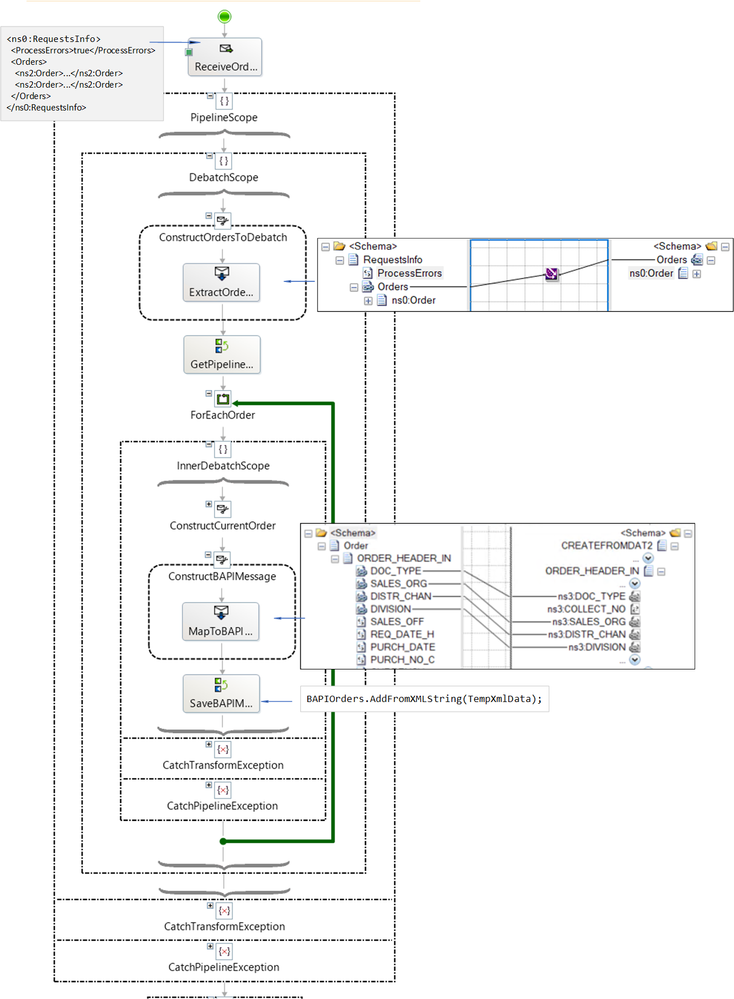 A few changes were made to the original pipeline of Debatching SAP BAPI Transaction Requests.

First, we introduced a Boolean element ProcessErrors to indicate the desired error behavior when BAPI transaction requests fail ("failure" being defined in the next section).

- If set to true, the orchestration will log the errors and continue processing the debatched transaction requests.

- If false, the orchestration will record the errors, roll back existing transactions, and exit. Orchestration instances are not suspended.

The idea of using ProcessErrors came out of being consistent with the BAPI parameter BEHAVE_WHEN_ERROR, which is documented by SAP as a way to control order creation when some sale items within a transaction (BAPISDITM field) cannot be created. A value of "P" (Process Errors) means that the order will be saved when errors occur and problematic items will not be saved.

The second modification was as follows: the method AddFromXMLString of helper class BAPIOrdersList, used for caching debatched CREATEFROMDAT2 documents,  now allocates a BAPIRET2[] array inside each CREATEDFROMDAT2, which is used on the SAP side as a return parameter (explained in the next section).

Last, exception processing was introduced in the debatching pipeline in order to catch errors that could happen during transforms from bad data. The details are covered in a separate article as they are not specific to BAPIs.

We classified "invalid" data into two types based on where the error happen and the corresponding impact: value errors and format errors.

As explained in Using BAPIs in Distributed Systems (ALE), a value of "E" in any of the TYPE fields of BAPIRET2 indicates transaction failure and therefore, nothing to commit.

Data Format errors correspond to field formats that do not abide by the metadata schemas provided by the SAP server, when generated in Visual Studio (cf. SAP BAPI Transactions Walkthrough). Such errors cause exceptions in the SAP adapter before a BAPI transaction is even sent, which then results in the SAP channel being broken. For example, if we used a string of length greater than 4 in the SALES_ORG field, we would get the following error in the event log:

Any further attempt to submit BAPI transactions in the same LUW would result in the dreaded "Inner Channel" exception which indicates that the connection to the server was already closed:

The latter happens because the ABORT message of BAPI_TRANSACTION_ROLLBACK is sent as first message on a new connection, which produces undesirable results as documented in Run BAPI Transactions in SAP using BizTalk Server. As a side-note, this illustrates the point that BAPI_TRANSACTION_ROLLBACK is not always suited to an orchestration exception block depending on the error.

Exceptions in the SAP adapter, caused by data format errors as well as from other errors such as using the wrong URL, result in suspended messages as shown below:

In the orchestration design presented next, such exceptions are handled gracefully and do not cause suspended orchestrations.

The logical flow through the orchestration can be divided into four "tracks":

Legends correspond to the flows presented below. Stages 1 and 2 are the same as in Debatching SAP BAPI Transaction Requests. The differences start at stage 3, CREATEFROMDAT2 and CREATEFROMDAT2Response processing:

For the sake of keeping the implementation as generic as possible, processing is geared towards logging everything that happens in order to show the different places of interest that could be adapted to "real-world" applications.

We look at the messages being constructed and the data being logged. What gets saved:

1. Original CREATEFROMDAT2 documents if there are any errors (value or format);

Value errors are contained in the CREATEFROMDAT2Response messages received from the SAP server. They are extracted by the orchestration into a variable of type the following helper class (complete code in attached archive):

which is used as in the expression:

where BAPIResponse is of type BUS2032.CREATEFROMDAT2Response. The method BAPIReturnValues.GetErrorString() produces the error string logged to a file by using the RawString class documented in sending string to file location in BizTalk included in the BizTalk code attached to this blog post.

XML messages are created with the expression:

Note the use of CDATA to prevent parsing of characters that would otherwise invalidate the xml format. Example of output for the same data value error:

Each of the stages is presented in detail in the next sections. We will look at value errors, then format errors, and finally commit/rollback.

Detailed steps are shown below: 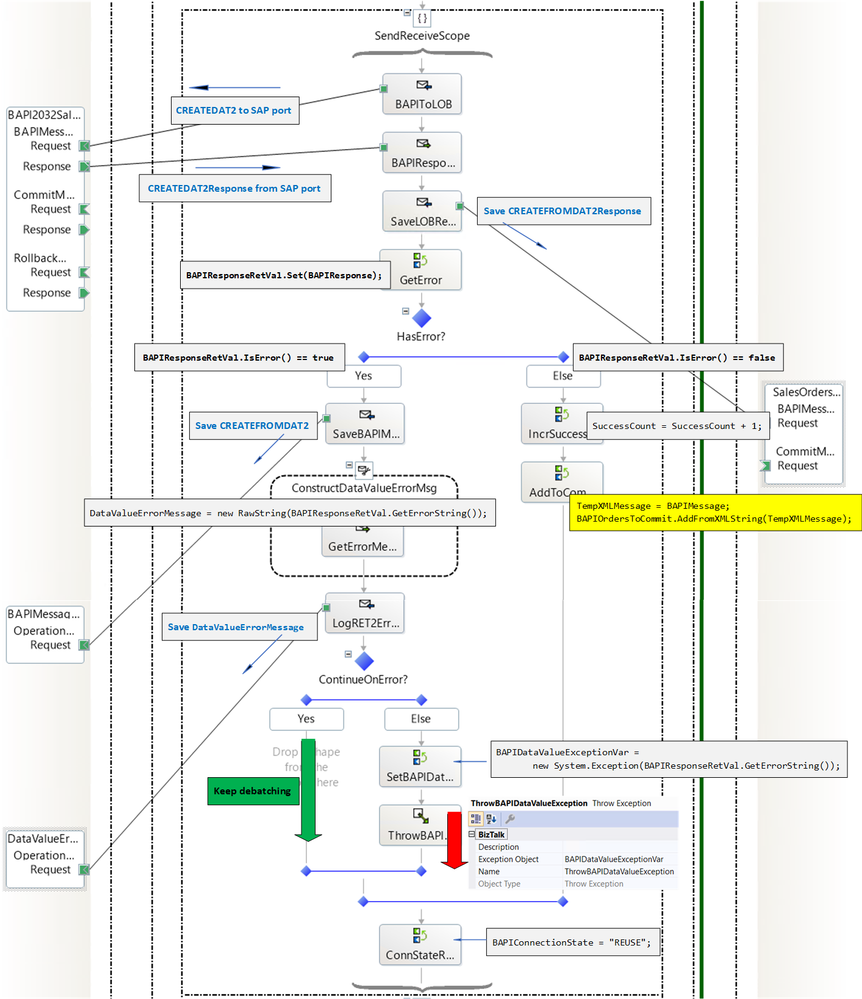 In case of success:

CREATEFROMDAT2Response documents are saved and CREATEFROMDAT2 are added to a list of BAPI orders to commit (highlighted in yellow).

In case of errors:

2. When ProcessError is set to false: the flow is interrupted with a System.Exception created by:

The exception will be caught later on, in the rollback stage of the orchestration. Example of logged exception:

Format errors are handled in a per-request catch block for System.Exception, which encompasses the System.Web.Services.Protocols.SoapException and Microsoft.XLANGs.Core.XlangSoapException. 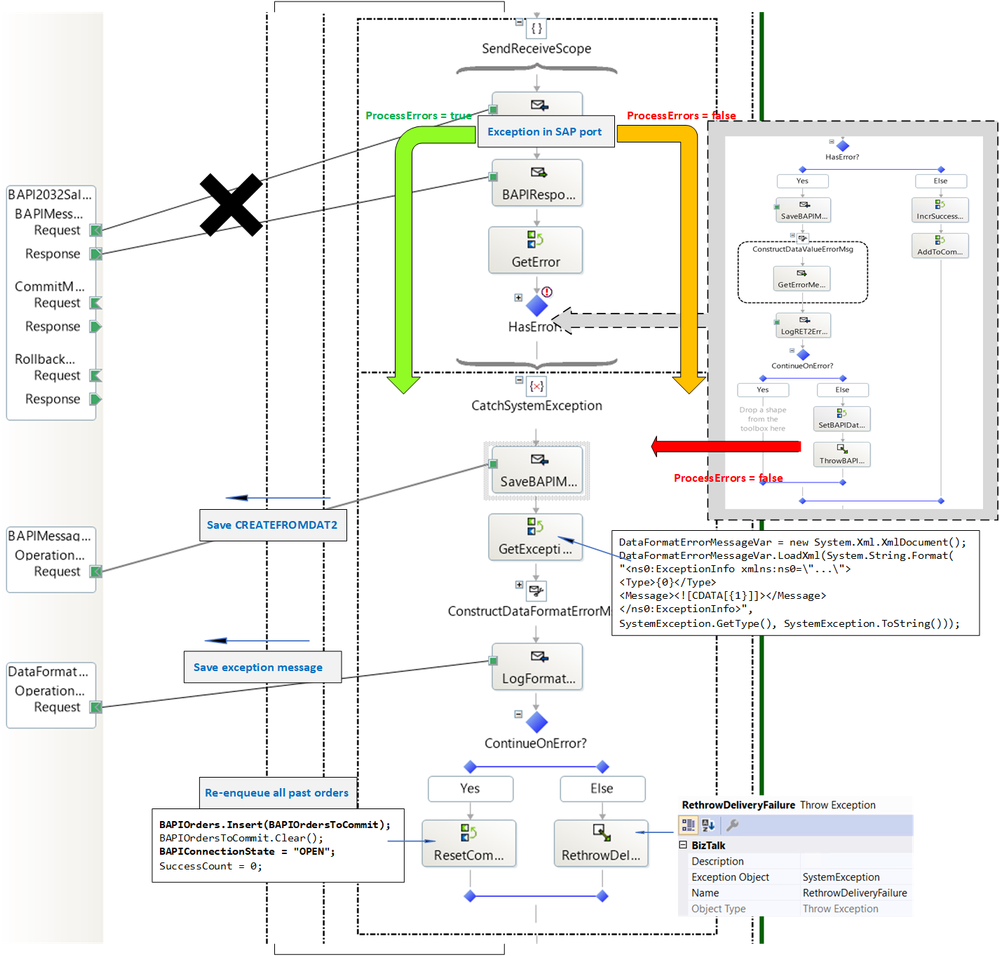 At this stage, regardless of ProcessErrors, exceptions are logged.

When ProcessErrors is set to true: Transactions that have been successful are re-enqueued at the back of the BAPIOrders list to be resent. The assumption that in this particular scenario configuration, BAPIs can be submitted in any order, which is reasonable if one is willing to ignore errors and let the processing continue. The BAPIConnectionState is reset to "OPEN" so that a new connection to the SAP server may be open to replace the connection broken from the SAP adapter exception. The re-enqueueing expression is:

As can be seen below, iterations will continue until BAPIOrders.Count() has been reached, which will include re-enqueued requests. 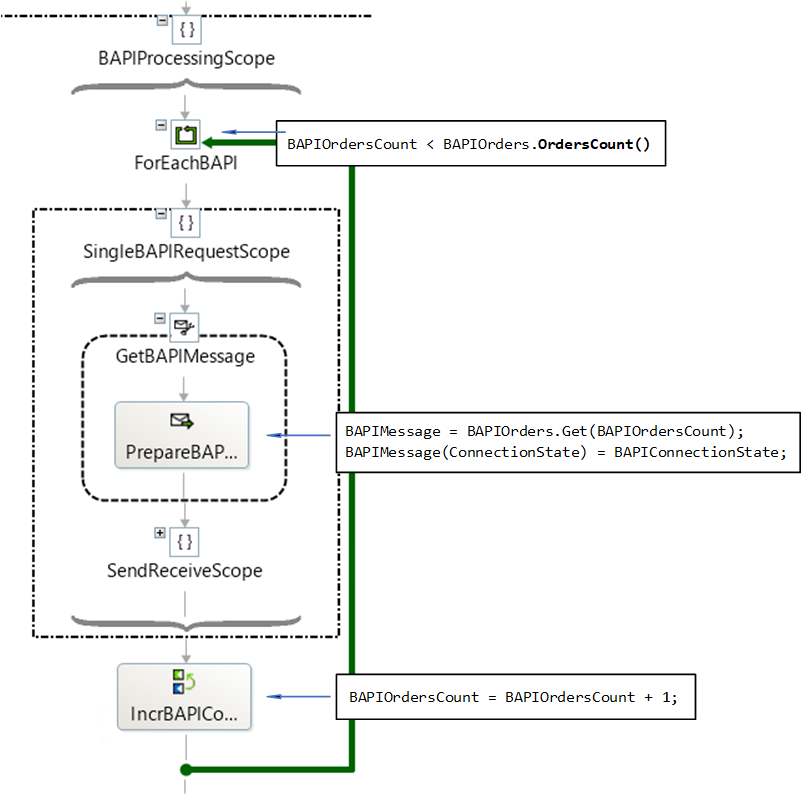 Commit and Rollback stages are almost identical. The former happens when there is no error or if any error has been processed; the latter when execution is interrupted by exceptions. In both cases, BAPI commit/rollback requests are sent only if there has been any successful transaction.

BAPI requests/responses are processed in their own scope for exception handling and logging as previously described. 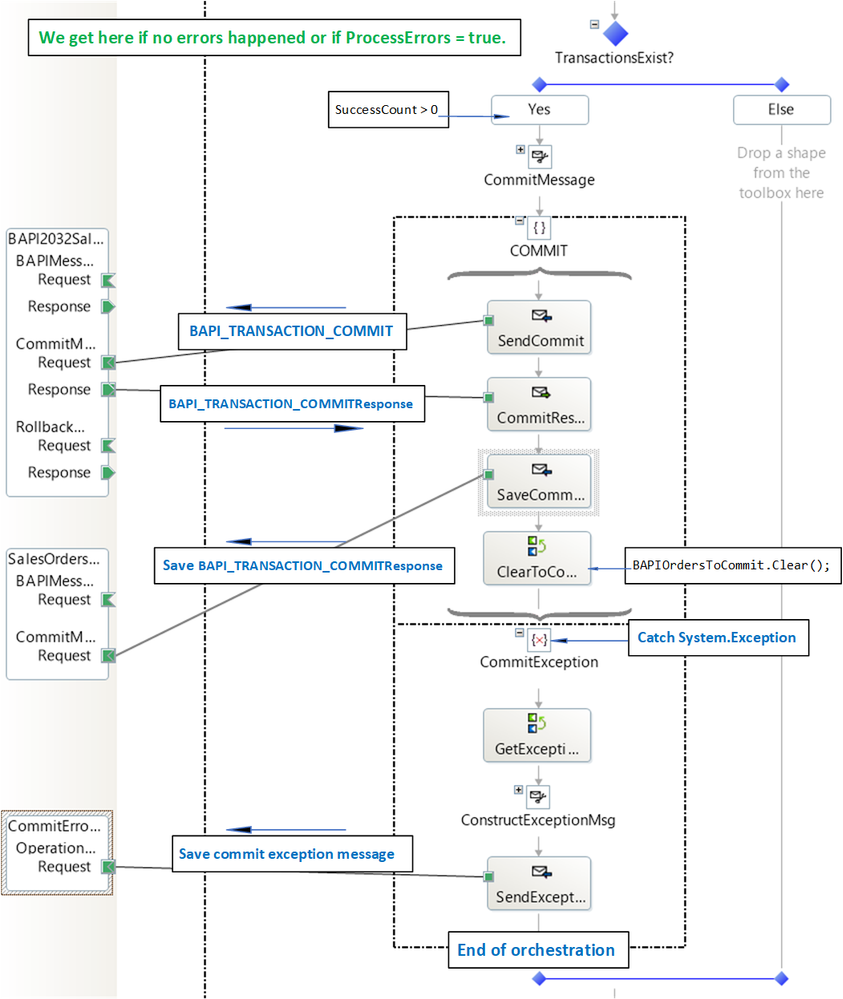 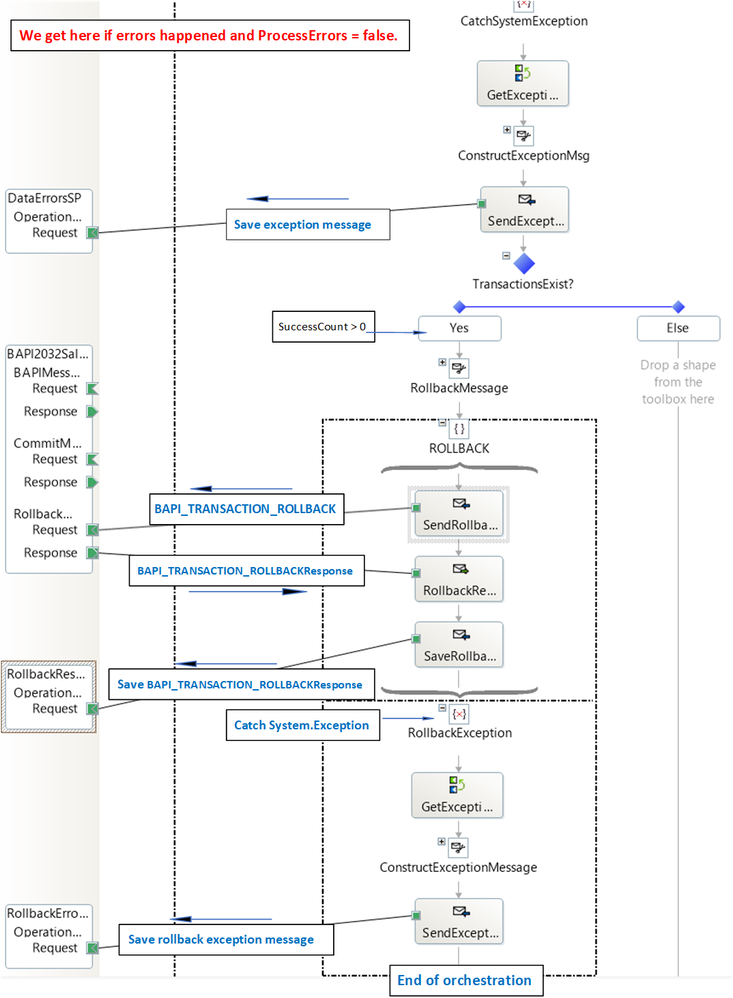 All artifacts used in this article can be created with the bindings file provided in the attached archive. There is one file location per logical send port used for logging. 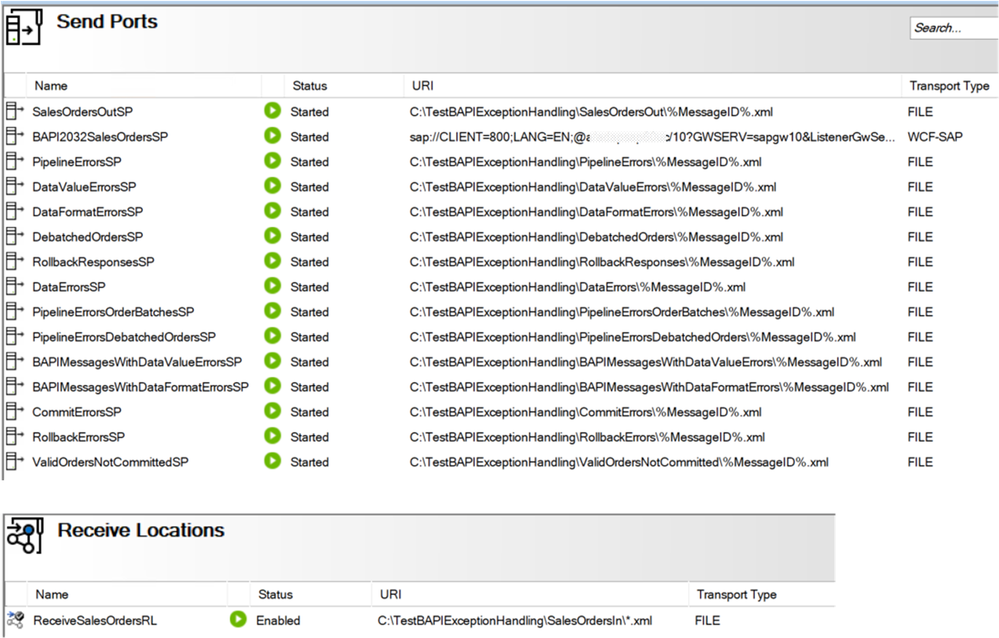 There is little BizTalk material on how to use error handling and rollback in BAPI transactions. Our aim here was to explore what can be done based on existing orchestrations such as the ones presented in this series of blog articles. Basically, what it would look like if we wanted to do more than "putting a BAPI_TRANSACTION_ROLLBACK in a catch exception shape", while keeping things as simple as possible. This meant leaving some items intentionally out-of-scope for this article, and it is worth mentioning some of them here:

- Re-enqueuing may be expensive if  channel-ending errors tend to happen at the end of a large batch of error-free transactions. The ideal workload would be one with either many errors at the beginning of a batch, or where errors happen randomly only in some batches. Clearly, there are some "pathological" cases, which could be mitigated by tuning the batch sizes, or by simply saving the transactions for later processing by a different orchestration instance.

- BAPI requests that could not be sent due to exceptions in the SAP adapter are suspended with resumable status. In the case of errors caused by the data in the messages, as considered in this article, resuming is of limited use. But there are ways to flow these messages back so they don't linger for too long in the message box.

- Last, as hinted at in Scatter-Gather Pattern with SAP BAPI Transactions, an interesting way to extend the topic presented here could be to combine error handling with asynchronous processing in multiple orchestrations.

The next article in the BAPI series, Recovering SAP BAPI Transactions with Custom Pipelines, combines the ideas presented here with debatching done in the receive pipeline.

Exceptions and Error Handling with the SAP adapter