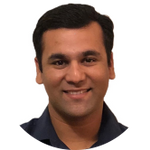 We are excited to announce a public preview refresh of the Live Video Analytics (LVA) platform, adding a new set of capabilities that will help in building complex workflows that capture and process video with real-time analytics. The platform offers the capability of capturing, recording, and analyzing live video and publishing the results (which could be video and/or video analytics) to Azure services in the cloud and/or the edge.

The LVA platform is available as an Azure IoT Edge module via the Azure marketplace. The module is referred to as Live Video Analytics on IoT Edge and is built to run on a Linux x86-64 and arm64 edge devices in your business location.

This refresh release includes the following:

We will now describe these exciting changes in more detail.

LVA now supports using more than one media graph extension processor within a topology. You can now chain extension processors with or without dependencies in use cases where a cascade of AI inference servers from disparate sources is needed to serve the user’s needs. An example of this is the use of a heavy inference model for object detection on sparse frames and having a lighter tracker downstream that operates on all frames and interpolates data from the upstream detector. These different extensions may operate at different resolutions, including a higher resolution on a downstream node.

Below is an example of how you can use multiple AI models sequentially.

You can take it a step further and build a complex graph such as this:

You can use as many extension processors as you need if the hardware(s) you are using can support it.

Passing data to your Inference Server

One use case of this property is to simplify the calling of multiple AI models that you are using with LVA. Let’s say that you want to use 2 or more inferencing models with LVA. Currently, in our quickstarts, we show you how to deploy an extension with the name: “lvaExtension”. Using the steps there, you would have developed and deployed 2 different modules ensuring that” both are listening on different ports.

Now, instead of configuring multiple network ports to connect to different AI models, as an extension provider, you can wrap all your AI models in a single inference server. You will then have your inference server invoke AI models based on some string that gets passed to it when called from LVA. When you instantiate the graphs, for each instance assign different strings to the extensionConfiguration property. These strings will be one of the strings you defined in the inferencing server to invoke the models. LVA platform during execution will pass the string to the inferencing server, which will then invoke the AI model of choice.

In December, we released a VSCode extension to help you manage LVA media graphs. This extension works with LVA 2.0 module and offers editing and managing media graphs with a very sleek and an easy-to-use graphical interface. This extension comes with a set of sample topologies developed for you to try out and get started. 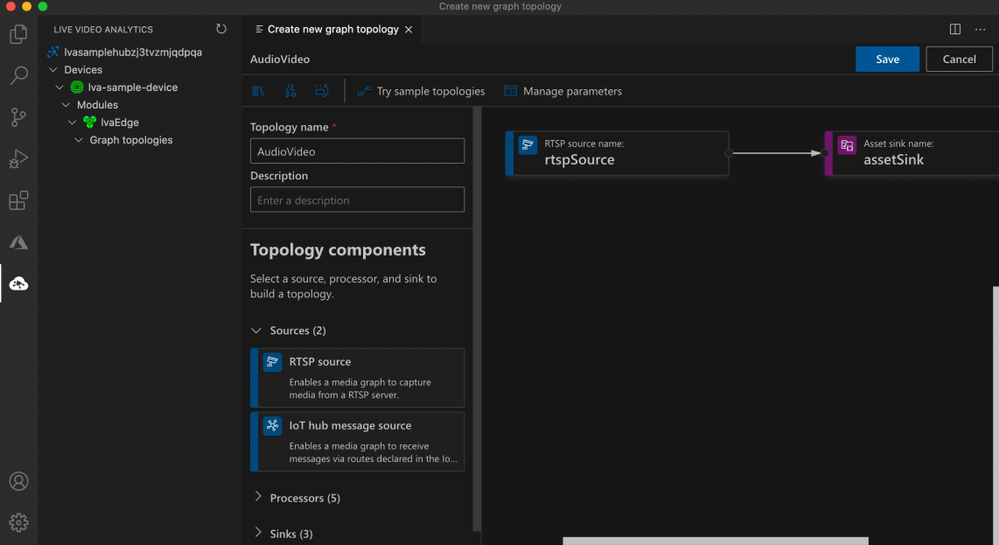 Along with the VS Code extension, we have also released the prerelease versions of C# and Python SDK client libraries that you can use to:

To help you get started with LVA using these client libraries, please check out our C# and Python GitHub repositories.

Now, you can now specify how much storage space LVA can use to store processed media when using sink nodes. As a part of the sink node, you can specify the disk space in MiB (mebibyte) that you wish to allocate for LVA to use. Once the specified threshold is reached, LVA will start removing the oldest media from the storage and create space for new media as they come from upstream.

With this release, Telegraf can be used to send LVA Edge module metrics to Azure Monitor. From there, the metrics may be directed to Log Analytics or an Event Hub. 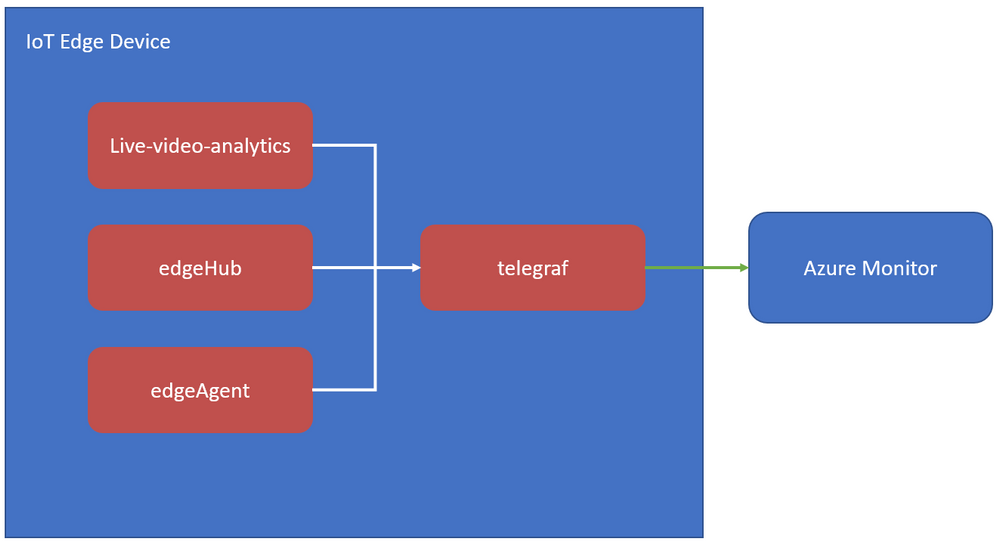 You can learn more about how collect LVA metrics via Telegraf in our documentation. Using Prometheus along with Log Analytics, you can generate and monitor metrics such as used CPUPercent, MemoryUsedPercent, etc. Using Kusto query language, you can write queries as below and get CPU percentage used by the IoT edge modules.

LVA now enables you to select passing only selected media types between nodes. With this release of LVA, you can now pass audio and video files from the RTSP cameras.

In addition, you can now specify in the LVA processor nodes, if “audio”, “video” or both media elements need to be passed downstream for further processing.

In closing, we’d like to thank everyone who is already participating in the Live Video Analytics on IoT Edge public preview. We appreciate your ongoing feedback to our engineering team as we work together to fuel your success with video analytics both in the cloud and on the edge. For those of you who are new to our technology, we’d encourage you to get started today with these helpful resources:

And finally the LVA product team is keen to hear about your experiences with LVA. Please feel free to contact us at amshelp@microsoft.com to ask questions and provide feedback including what future scenarios you would like to see us focusing on.