Special thanks to @Ofer_Shezaf and @Alp Babayigit that collaborating with me on this blog post.

In the blog post we will introduce a solution which uses Logic Apps to automatically attach evidence to Azure Sentinel alerts and send them to an Event Hub that can be consumed by a 3rd party SIEMs and Ticketing Systems.

Using Sentinel alongside a 3rd party SIEM and ticketing systems

From our customers engagements we learned that sometimes customers prefer to maintain their existing SIEM alongside Azure Sentinel.

Among the reasons for doing so are:

In addition, customers often use a ticketing system, such as Service Now or JIRA to manage incidents at the SOC and need to forward alert information to those systems.

Traditionally, customers forwarded alerts from Azure Sentinel to their existing SIEM or ticketing systems using the Graph Security API. You can do so for Splunk, QRadar, Service Now or any other SIEM or Ticketing System that supports Event Hub ingestion.

As an example, the following alert rule taken from the KQL Lab uses the summarize and extend keywords to produce just the data relevant to the detected anomalies:

Forwarding alerts with supporting events to an Event Hub

In this article, we demonstrate how to use Azure sentinel SOAR capability and leverage a Logic App playbook to send alerts with their associated supporting events to a 3rd party SIEM. 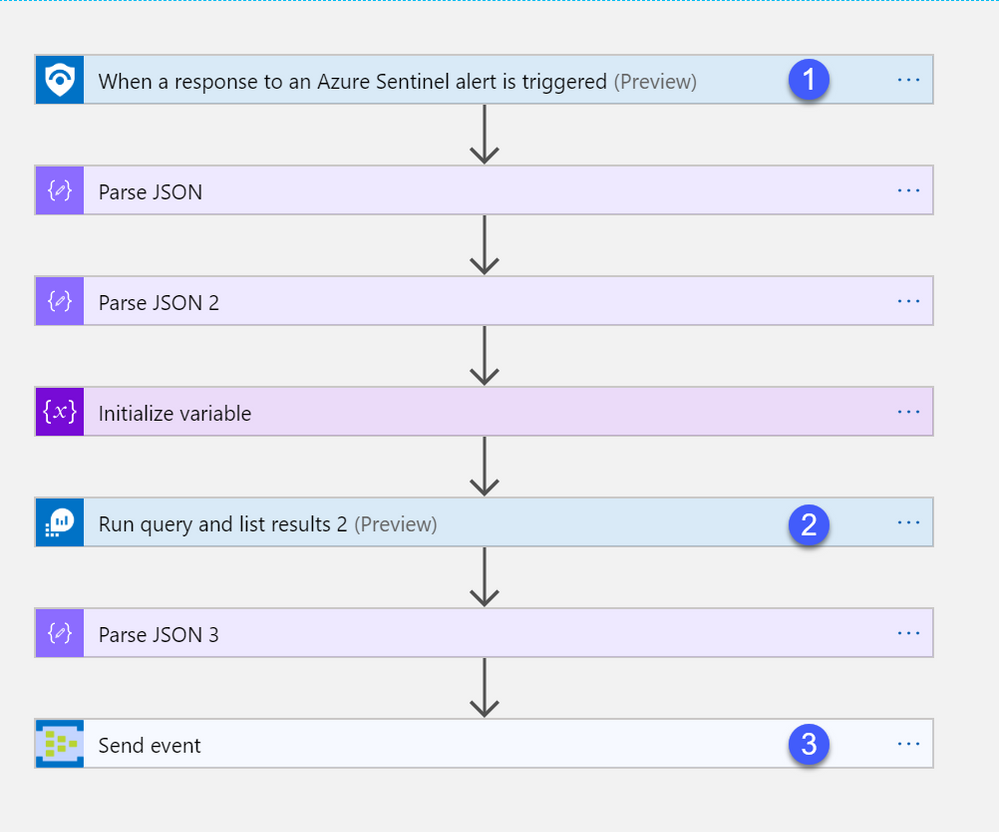 The JSON that is sent to the Event Hub looks as below. The “SupportingEvents” attribute is added by the Playbook

Connect to your 3rd party SIEM or ticketing system

Most, if not all, SIEMs can consume the alerts from an Event Hub. Consult with your SIEM vendor on how. The following are instructions for consuming the alerts from the Event Hub to popular SIEM platforms:

Alternatively, if your SIEM or ticketing system supports an API, you may be able to connect directly from the Logic App playbook to your SIEM using the Logic App HTTP connector, or, if available a dedicated connector such as those available for Service Now or Jira

We just walked through the process of how enrichment can be done on Azure Sentinel level by leveraging could native capabilities in Azure before forwarding to 3rd Party SIEM or to a ticketing system. Stay tuned for more us cases in our Blog channel!

That is a lot of parsing going on there!

I have the same struggle when pushing data from Log Analytics to Logic Apps since the data is wrapped in tables and rows. What is the best way yo handle this? Any tips?

The Sentinel trigger brings the alert rule related data and running it on Log analytics using query extended options gets the events.

So do you mean pushing data from Log analytics to Event grid instead?

Its always an array from log analytics output with proper json objects which should be easy to deal with.

Can you kindly ellaborate your issue?

In this blog, the JSON is parsed with powershell using an Azure function, but that seems a bit of a detour. As the writer of the blog mentions, he has no better option for it yet. The data is indeed in JSON format, but the values that matter to me are all stuffed in one single row. See this example.

That is not easy to parse.

I have done some work on this.

Below is the logic app over view

Input is taken as a string it is the whole json from here (as you mentioned).

Then I parsed it.

Inside foreach loop I used json(items('For_each_entry_in_input')?['Properties']) . You can use this parsed json to perform required actions.

or it can be added to an array variable like i did to get all the json in an array.

How would I change your above logic app to address my situation?

@MaheshMarthi do you mind sharing the details on the logic app steps with us? Thanks!

You have option to use Incident APIs available here.

@HetashParmar You can use Incident APIs available hee

https://github.com/Azure/azure-rest-api-specs/tree/master/specification/securityinsights/resource-ma... to poll incidents and push data to your ITSM