Turn on suggestions
Auto-suggest helps you quickly narrow down your search results by suggesting possible matches as you type.
Showing results for
Show  only  | Search instead for
Did you mean:
Ten Azure networking tips that may simplify your life
By

Azure networking can sometimes give headaches. Here are a few tips which may make your life easier.

When enabling Azure Private Link for a given resource, say a Storage Account, you may end up with the following configuration

where you have routed all traffic to Azure Firewall (or an NVA) and noticed that the VM (or anything else) is directly connecting to the private endpoint, bypassing the firewall...This might come as a surprise to you but this is due to the fact that whenever you enable private link for a given resource, a direct (more specific) route is propagated to the underlying NICs. In the above example, Azure will write the 10.1.5.4/32 route to the NIC(s) of the VM pointing directly to the InterfaceEndpoint of the resource. Because this route is more specific than 0.0.0.0/0, the firewall will be bypassed. To overcome this, you have to write a /32 route to the subnet's route table to overwrite the one written by Azure, which can be itself challenging because of the 400 routes limit per route table. Microsoft wrote a good guidance on that topic.

Ok, now you think you understood private link routing, right? So what about this?

You thought Azure was pushing a route to underlying NICs but you realize that the VM in VNET 3 does not have such a route...Why is that? Well, it makes sense but you do not especially think about it. The reason why VNET 3's VM does not get the route is because VNET 3 is not peered with VNET 1. Because peering is non-transitive, writing such a route would anyway lead to a dead-end. So, if you had a 0.0.0.0/0 UDR on VNET 3's subnet, this would this time be correctly routed to the firewall...So as you guessed it, if you put a private endpoint in an intermediate VNET:

this time, the /32 route is propagated to all peered VNETs. Long story short, putting private endpoints into the hub, would propagate into every spoke, and thus, you'd better follow the guidance if you want to route that to the firewall.

Ok great, that's for routing but fortunately, we don't have to worry about NSGs. Well... 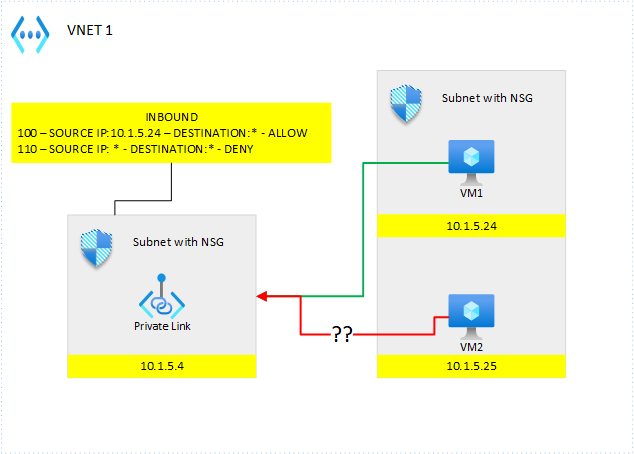 Well, I'm sorry for you if you read the first 3 episodes because all of that is *almost* part of the past...but you will surely still likely see this for quite a while. Microsoft has revamped the way private link works, and there is a preview (UDR) and preview (NSG) available (not in all regions), which allows you to deal with private link traffic, like with any other type of traffic, but meanwhile, you'd better still understand how it currently works :).

[edit:this turned GA just a few days after the publishing of this post https://azure.microsoft.com/en-us/updates/general-availability-of-private-endpoint-network-security-...]

I still see a huge confusion with many folks about private link, where people think that enabling private link for an app service, APIM, etc. will give them access to the resources sitting in a given VNET. That is wrong, to gain access to such resources, you have to focus on outbound traffic, not inbound!

Remember one rule of thumb: private link does not automatically deny public traffic for all services. It does for some but not for all. So, remember to always double-check that public traffic is indeed correctly denied.

Whenever you establish private connectivity between your datacenter and Azure, you will use the hub vnet to bridge both worlds. You're likely going to have (not mandatory) a VPN Gateway to establish a S2S and/or Expressroute connection. From there on, each spoke VNET should be able to connect to your on-premises systems and vice-versa. You, of course, want to make sure, traffic is routed through your firewall. If you encounter a different behavior (traffic directly flying from on-prem to spoke and vice versa), you're likely forgot to deactivate the "propagate gateway routes" property of the route table.

8. The Kubenet effect of NSGs

Many companies struggle to decide whether they want to implement Azure CNI (now BYO CNI is available) or Kubenet for their AKS clusters. The main reason is the shortage of IP addresses. Kubenet is IP-friendly because it only allocates IPs to nodes, while CNI allocates one IP per pod, which results in many more consumed IPs. You can use Kubenet if you're willing to fully embrace a programmable network approach such as the use of Service Meshes and internal Network Policies (Calico for ex. which also works with Kubenet).  However, if you plan to rely on Azure networking capabilities, such as using NSGs and the likes, then you'd better switch to CNI. Consider the following scenario:

where you want to share the same cluster for multiple tenants but you want to isolate tenants in their own node pool. So, in the above scenario, you only want system to be able to connect to tenants but tenant 1 and tenant 2 cannot talk together. You do not trust logical isolation (K8s network policies & service meshes) and want to rule this with Network Security Groups instead, or even combine both. Easy, you simply add the following inbound rules to tenant 1 & tenant 2's NSGs:

So, that way, this should fly...Well, it appears that this won't fly at all. Why is that? Because Kubenet makes use of network address translation (NAT) to allocate POD CIDRs dynamically, and what the NSGs see are not the subnet ranges but the POD CIDRs..., which can change at any time. Indeed, Azure constantly rewrites the route table associated to the subnets to map POD CIDRs with nodes, whenever the cluster restarts or whenever a node gets added/removed to/from a node pool. Therefore, you can't predict how this allocation will be done, which defeats the use of NSGs to rule internal traffic. Of course, you could still use them to rule what comes from outside.

Did you know that you can use the keyword localhost in APIM policies? If you have a set of APIs and want APIM to let them call each other while never leaving the boundaries of APIM itself (not resolve again the IP through the DNS), you can use localhost...

Whenever you encounter a network issue in Azure, I recommend you to use Network Watcher and more specifically, its next hop feature. It helped me already a few times figure out what was misconfigured.