Turn on suggestions
Auto-suggest helps you quickly narrow down your search results by suggesting possible matches as you type.
Showing results for
Show  only  | Search instead for
Did you mean:
Azure DDoS Standard Protection Now Supports APIM in VNET Integration
By

When you deploy your APIM instance in Azure virtual networks (VNets) and attach a public IP to it, you get external inbound connectivity to the gateway and API Management endpoints, giving your API Management instance secure access to other peered Azure resources and connectivity to your on-premises networks using different VPN technologies and Express route. This type of setup will open external access to private and on-premises backends, which makes your API Gateway vulnerable to DDoS attacks.

In a scenario where you have infrastructure/workloads such as gaming and sensitive web applications, even a small downtime will sustain huge financial costs and reputational damage to your organization. Attackers will try to overload the backend using bots and block legitimate traffic or bring down the system. With Azure DDoS Protection Standard, you can mitigate volumetric and protocol DDoS attacks which are targeting your APIs on Azure.

This blog will show you how to:

For this blog’s purpose we will create an APIM instance with minimum configuration as shown above. Make sure to choose Virtual network as connectivity type under Virtual network tab to enable inbound connection from the internet through the VNet and get the option to enable DDoS Protection Standard. We will use the API Management instance in external mode however you can choose either Internal or External mode depending on if you require connectivity to your API Management endpoints from the internet or only within the VNet, for the second option choose Internal mode. Full configuration steps can be found here Connect to a virtual network using Azure API Management | Microsoft Learn 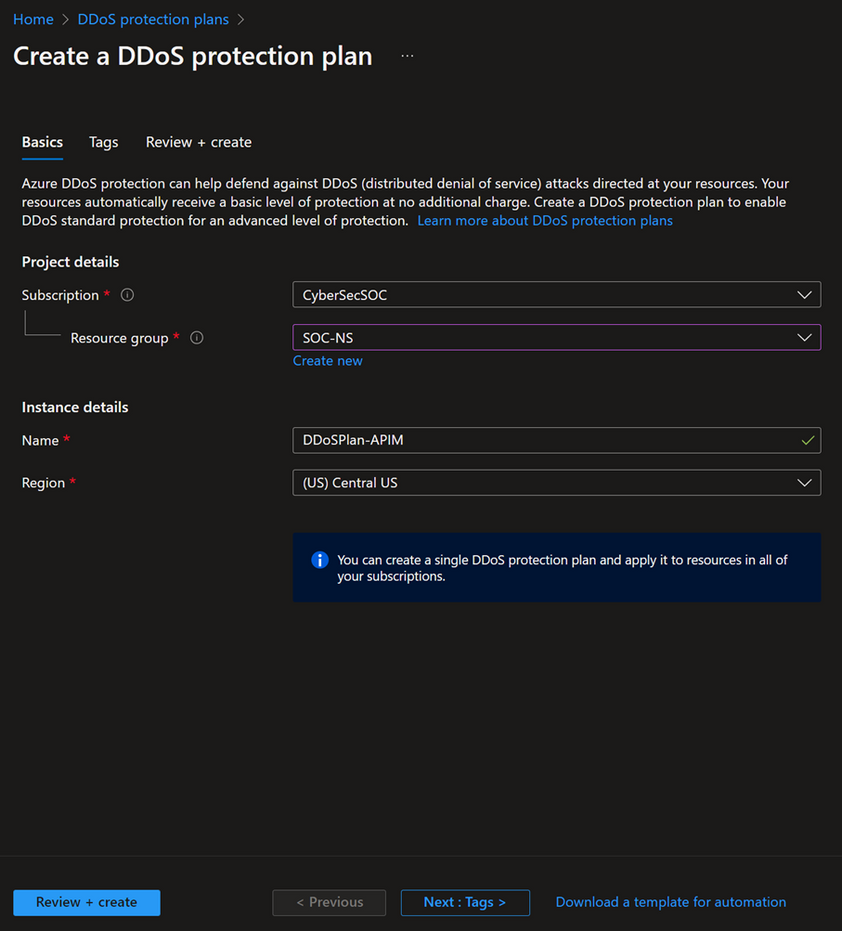 After deploying DDoS plan, go to protected resources and add the VNet where you have the API Management instance deployed.

Enable logging on your Public IP 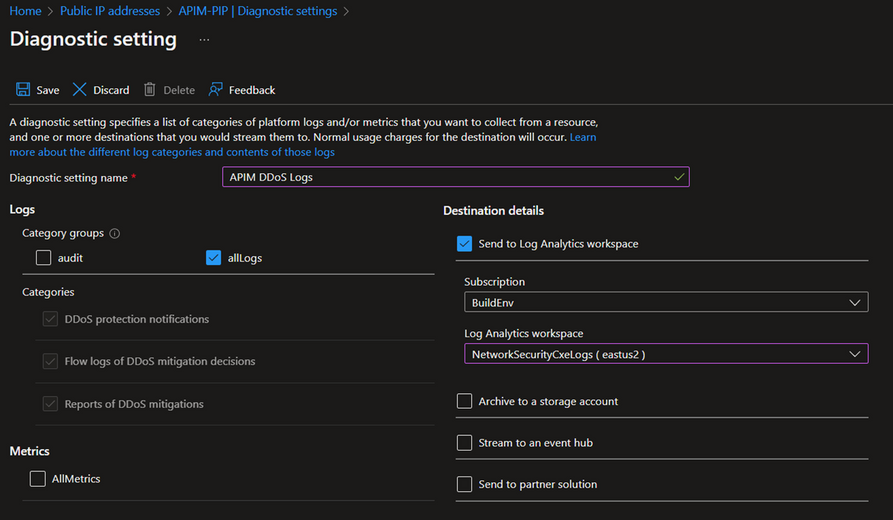 In your Public IP configuration, create a diagnostic setting with all categories selected and your log analytics workspace destination.

Before starting the simulation attack let’s check the metrics and current threshold for our public IP. Under your public IP resource click on metrics, add a new metric, and choose “Inbound SYN packets to trigger DDoS mitigation”.

This metric will show us the current TCP SYN packets threshold for triggering DDoS mitigation. In our case we can see that it’s 10k/s. 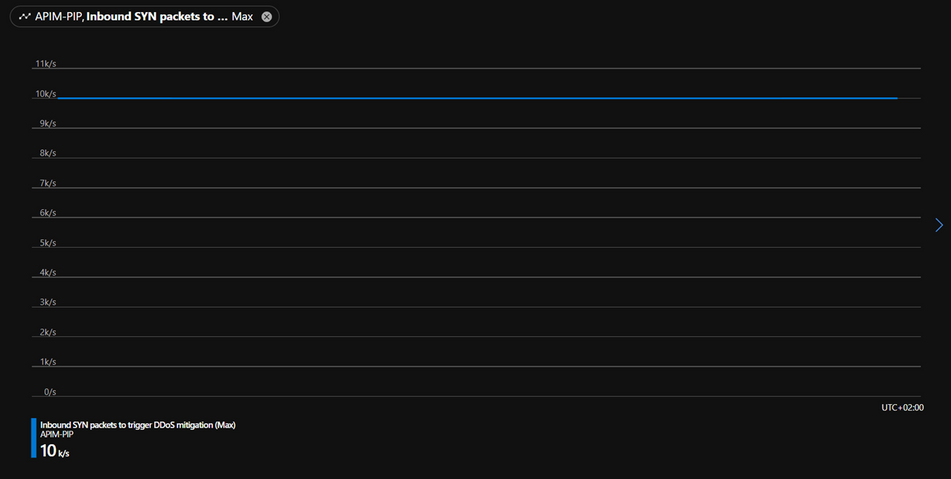 The other metric which we want to look at is “Under DDoS attack or not”. This metric has only 2 values 0 and 1: 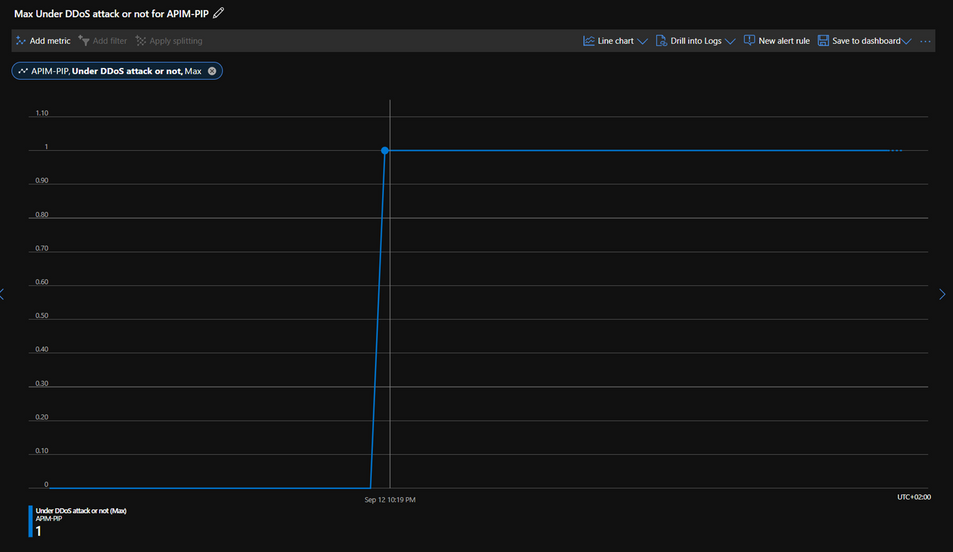 Once we start the DDoS simulation attack you will see the metric changing to 1 as shown above, DDoS attack started at 10:19PM. To get more information about this attack and its mitigation we will have a look at our logging. Go to your log Analytics workspace where you have the Public IP logs sent to and under logs run the following query:

We should see one entry with the message [MITIGATION STARTED] as shown in the screenshot below.

Let’s run another query with Category as "DDoSMitigationFlowLogs"

DDoS mitigation flow logs will provide us with all the logs of packets being allowed or dropped, in the example below we can see that in the message it states “Protocol violation invalid TCP syn” which means that the packet was dropped because it was identified as malicious packet.

Enabling internet connectivity to your API services creates a huge risk of getting attacked by DDoS as any endpoint that is publicly reachable from the internet is vulnerable to these attacks, With the recent Azure DDoS protection support for VNet integrated API Management instances in Azure, you are now able to mitigate volumetric and protocol DDoS attacks on a global scale with minimum configuration and overhead. After reading this blog you should be able to create an APIM instance with VNet integration, configure Azure DDoS protection standard and investigate DDoS mitigations that occurred in your environment.